Remember That Burned Tesla Model X on a Frozen Lake? Its Owner Was Just Charged With Federal Fraud

Talk about a twist ending. 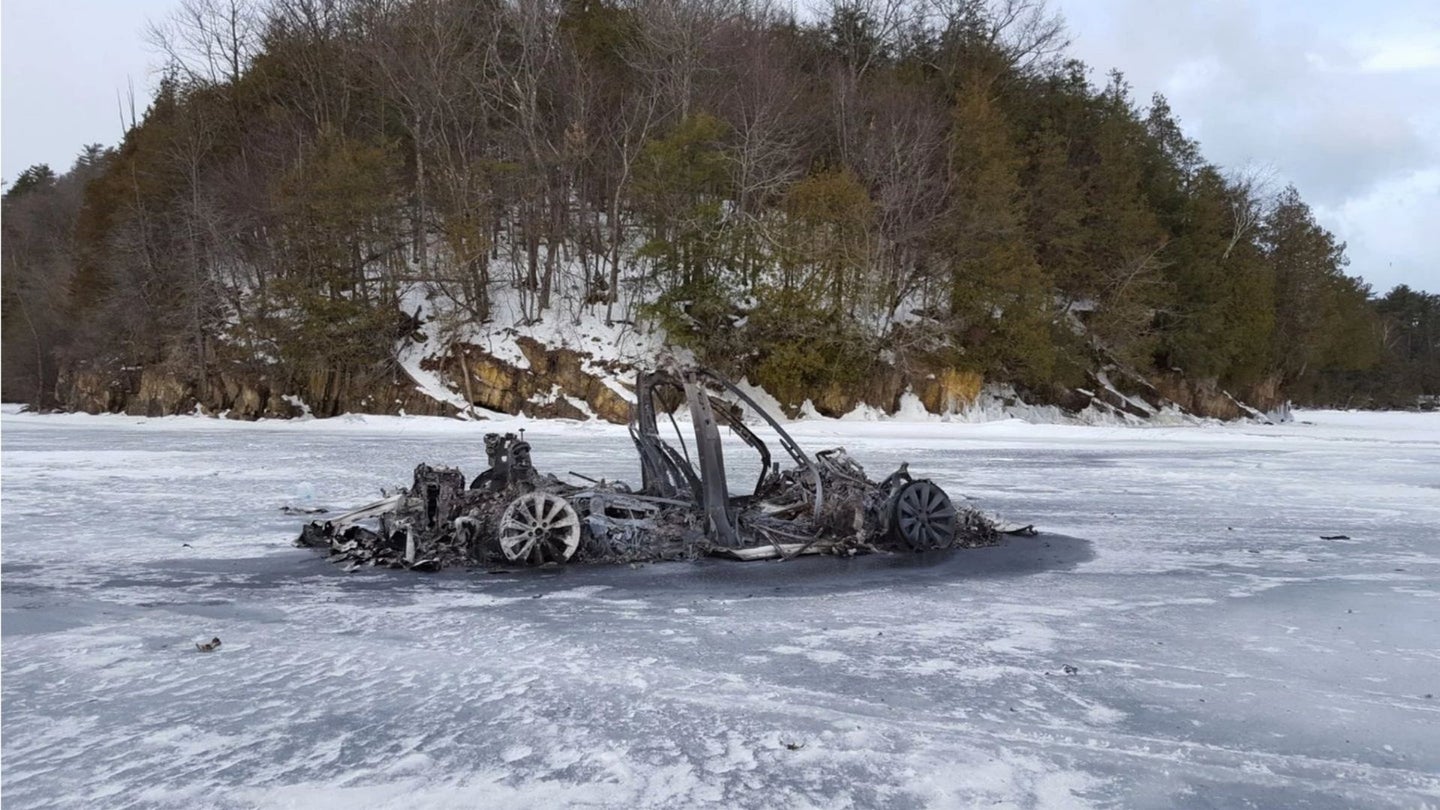 In February of 2019, an unexpected ornament adorned the frozen surface of Lake Champlain in Vermont: a Tesla Model X, burned to an extra-crispy shell. According to local Vermont news site WCAX, a man identified by police as Michael A. Gonzalez claimed he drove the vehicle onto a frozen patch of Shelburne Bay to go ice fishing.

No one knows for sure, but Gonazlez may have hit a rock and the Tesla ended up a toasty fireball; even then it barely made a dent in the thick ice. Within days of the Model X spontaneously catching fire on the lake (some Tesla Motors Club forum commenters blame the Lake Champlain Monster, whatever that is) a flatbed truck was dispatched to haul the carcass away. By that time, the Model X looked like Wile E. Coyote after Roadrunner blew him up with TNT for the hundredth time. That news all by itself is odd enough, but here’s the follow-up story we didn’t see coming: a federal indictment unsealed recently states that Gonzalez allegedly helmed the heist of several Model Xs worth a total of $607,000.

Here’s what happened, according to the indictment on the U.S. Attorney’s Office for the State of Vermont:

“Between September 2018 and January 2021, Gonzalez obtained five Tesla vehicles worth a total of approximately $607,000 from dealerships in New Jersey, New York, Massachusetts, and Florida. For each vehicle, Gonzalez made an initial payment of approximately $2,500, and then arranged for electronic funds transfers to cover the balance of the vehicle’s price from accounts with insufficient funds or from fictitious accounts.

The statement continued: “Gonzalez took delivery of the vehicles from Tesla before Tesla discovered his failure to complete the final payments. Gonzalez resold or attempted to resell four of the five vehicles. Gonzalez was never issued the necessary paperwork to resell the fifth vehicle, which subsequently burned on a frozen portion of Shelburne Bay on February 24, 2019. Gonzalez attempted to claim insurance funds for the value of this burned Tesla, but the insurance claim was denied.”

Vermont independent news blog Seven Days reported that Gonzalez made a reservation for his fourth Tesla Model X for $136,710 with someone else’s driver’s license in March 2019. Then he allegedly registered the car with the Vermont DMV and transferred the title to his own name. Here’s a detail that makes you say “huh?” – he allegedly claimed he traded a 2013 Kia Optima valued at $8,200 for the Tesla, then flipped it on eBay for nearly $100,000. Nice work if you can get it. However, getting caught comes with a bonus of up to 10 years per violation for illegal possession and sale of a boosted car.

On the indictment, the Acting U.S. Attorney noted that the defendant is presumed innocent unless proven guilty. And at this juncture, Gonzalez has pleaded not guilty.

The exact cause of the inferno is unknown, but many suspect a rock hit the Tesla’s battery pack, which usually spells bad news.