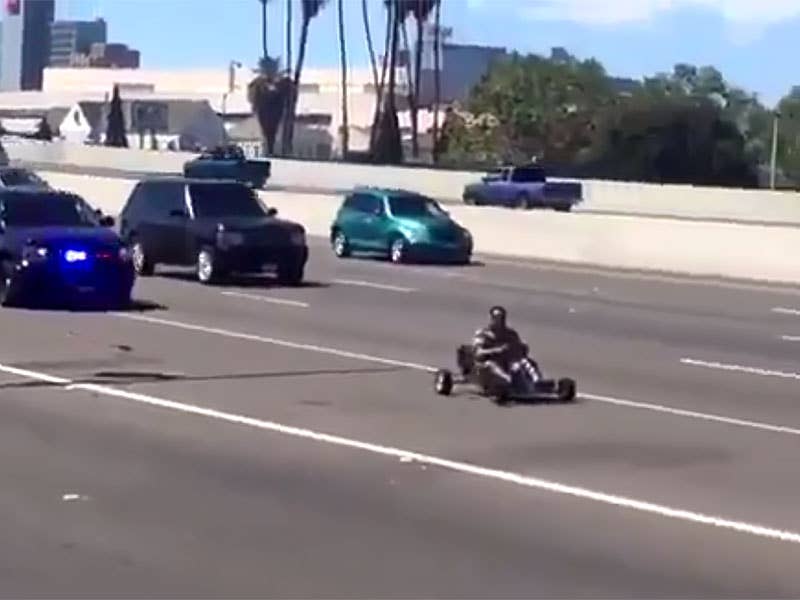 In a scene weirdly reminiscent of more than one video game, police chased a man driving a go-kart down a busy California highway last weekend. ABC News reports the police chase took place on Interstate 880 in Oakland.

In the Twitter video of the police chasing the go-kart—which appears to have originated from Snapchat, based on the font of the word "MOBBIN" overlaid on the screen—the low-slung vehicle can be seen speeding down the roadway, a black unmarked Chevrolet Tahoe police cruiser in hot pursuit as civilian traffic ducks out of the way. Though we can't be certain from the video, the cop in pursuit may well be an agent of the California Highway Patrol—and as The Drive and one bold chihuahua found out, the CHiPS do not mess around. As of this writing, it is unclear whether police were able to catch the joy-riding go-kart.

In its story, ABC News quotes a tweet from user @Tonka_Boy_Dre, who appears to have posted the original video, claiming that the go-kart rider caught on camera was hardly the only one riding an illegal vehicle on the Oakland highway that day. Local residents, he stated, often stunt through the city on their go-karts and dirt bikes, occasionally taking to the highway for a little fun.

"This particular person on the go-kart was the slowest and the last in the pack," the Twitter user wrote. "That's why he was being chased by police."

Other Twitter users began adding footage of their own from the chase, including some captured from the vehicles on the highway.

The Drive would like to remind everyone that, as much as it might seem like a quick way to viral video fame, riding a go-kart or any other form of motorized vehicle on an interstate is a terrible, terrible idea. But most of you probably knew that already.