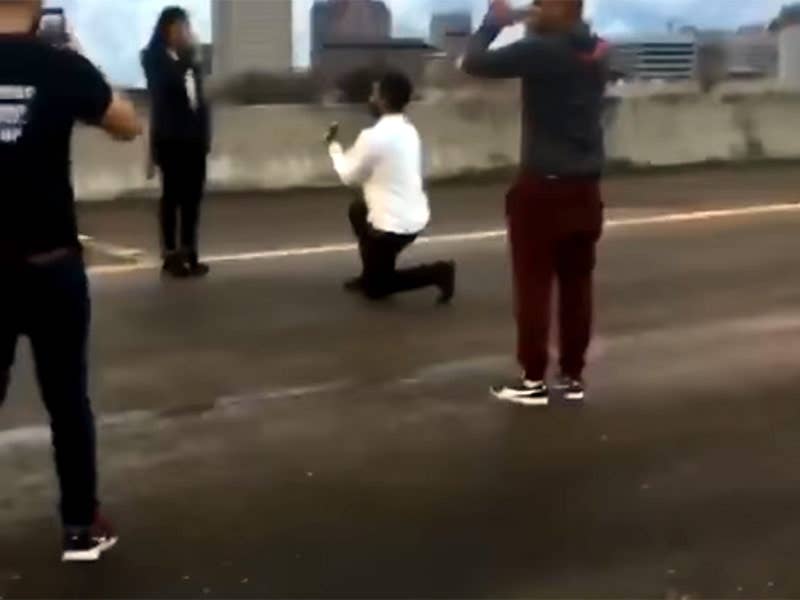 There’s been a real uptick in extravagant, flash mob-style proposals this decade—it’s showbiz everywhere. Groomsmen-to-be dancing, parents lip-syncing, one or two passable somersaults. This example, to Bruno Mars’ “Marry You,” still reigns supreme. It is family choreography on a mass scale. Even for the most cynical Internet users, rooms have been known to get dusty. Most marriage proposal spectacles are damn cute.

This proposal, well… has good intentions. Vidal Valladares Navas chose to propose to his girlfriend at one of the couple’s favorite spots which, as it happens, is Interstate 45 in Houston. It also happens to be one of the busiest freeways in the nation. To make it happen, Navas enlisted lines of friends to bravely block all lanes, creating a federally-funded platform on which he could propose to his girlfriend of 18 months. Friends and family also aided in forming a barricade against hordes of angry commuters. According Navas’ Instagram, the proposal was successful, though the video, now taken down, provides only the sound of blaring horns.

When asked, the Houston Police Department said no arrests were to be made, though blocking a roadway is a Class B misdemeanor. The Texas DOT also noted that, besides being against the law, Navas’ fast-lane proposal was highly dangerous.

The lesson? Sure, go big with a potential proposal. Enlist friends, learn choreography. Bring a boombox. But don’t make the site of the thing a busy federal highway. No couple wants to get married in spite of the fact that Grandma and Grandpa were flattened just after the engagement began, or postpone a reception until the groom gets out of jail.