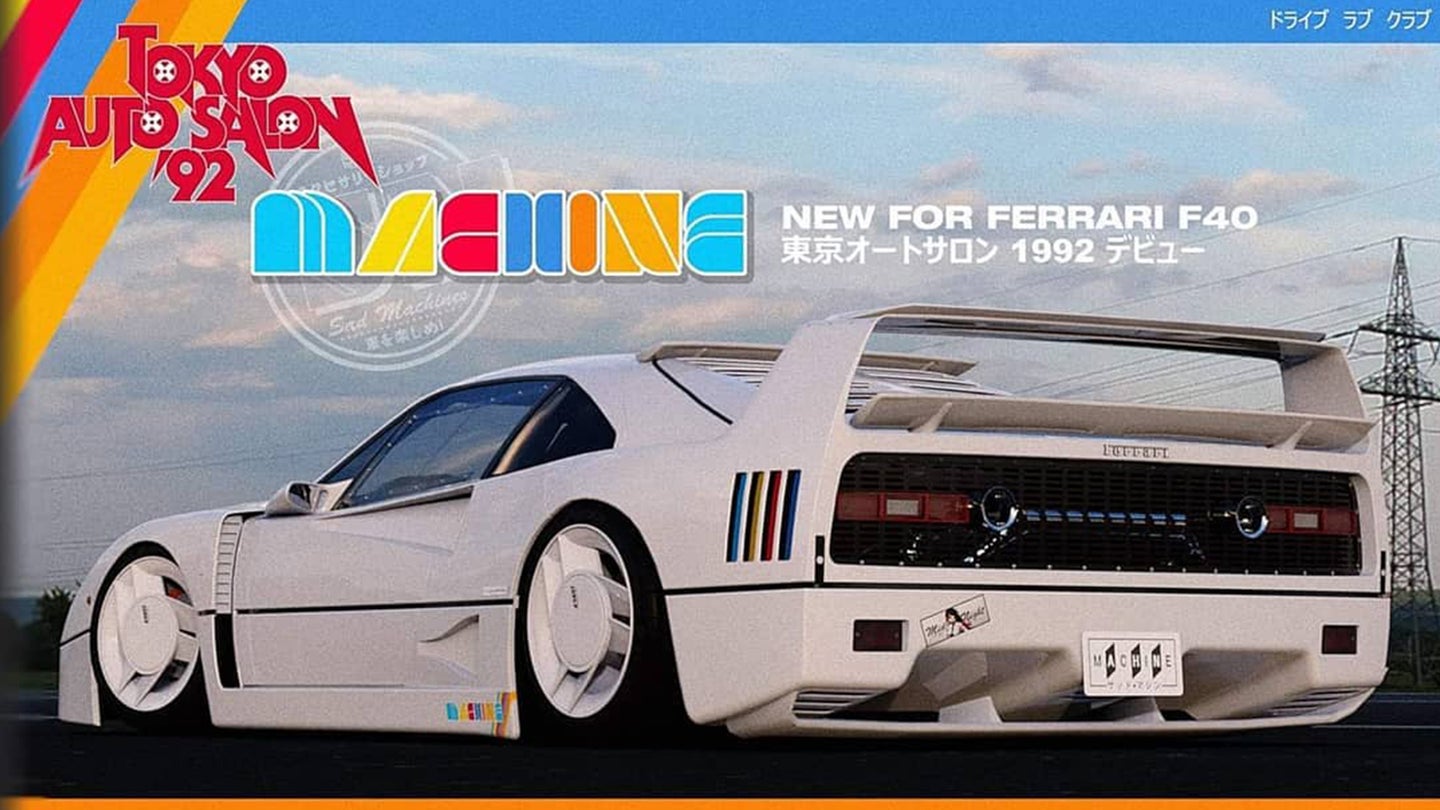 Renderings, deep fakes, and other computer-generated videos or photos of cars have gotten extremely convincing lately. So good, in fact, that sometimes even lifelong gearheads have to take a second look just to make sure whether things are what they seem or not. Such is the case of a photo of a Ferrari F40, which has been making the rounds on the internet for years.

The photo of a kitted-out Ferrari F40 has been shared countless times on social media, the image itself allegedly an ad for the 1992 Tokyo Auto Salon, turns out has been a fake the entire time.

The rendering was done back in 2018 by "Sad Machines," a digital artist who specializes in many of the funky car mashups you've probably seen online.

Sad Machines told The Drive that this particular rendering was kitbashed, meaning "parts" were taken from other models and molded into the car—all digitally, of course. The taillights, for example, were from a 1985 Impala, and the mid-spoiler was sourced from a Hakosuka Skyline.

In reality, the car was only born because he was curious what a set of Enkei Aeronautics wheels would look like on an F40, so he modeled the creation in 3D modeling software Blender, and then rendered it in Keyshot, a popular rendering software.

He also mentioned that not a lot of effort went into designing it, which makes the amount of attention that this car gets a bit upsetting versus some of his other creations like the Kaido fastback. That also translates to a few easily spotted giveaways that point out the car as a fake.

For starters, there's the U.S. phone number on the ad, a .net website, the inaccurate Midnight Club slap sticker, and, of course, the artist's watermark.

So, why does it get so much attention? Sad Machines has a theory:

"I think the combination of it being 'Japanese' and 90s, as well as an F40 gets people so excited or curious about it," the artist told The Drive. He later added, "really the best part of that whole image is the aging of the ad."

Aging seems to have been enough to convince enough people of the ad being genuine because it took social media by storm. On some posts, the artist recalled arguing with commenters who refused to accept that he was the designer behind the creation. It even became the center of controversy after it ended up on a shirt of a popular clothing brand.

On the other hand, I almost wish it was real, because the Ferrari F40 is so coveted and protected that many people just won't drive or alter their precious piece of art.

The moral of the story is simple: don't believe everything you see on the internet.

It’s not every day you see a Ferrari F40 slide around like a rally car—but it should be.

Ferrari F40 Burns To The Ground On Japan’s Hakone Turnpike

Pour one out today for another one of Maranello’s best.