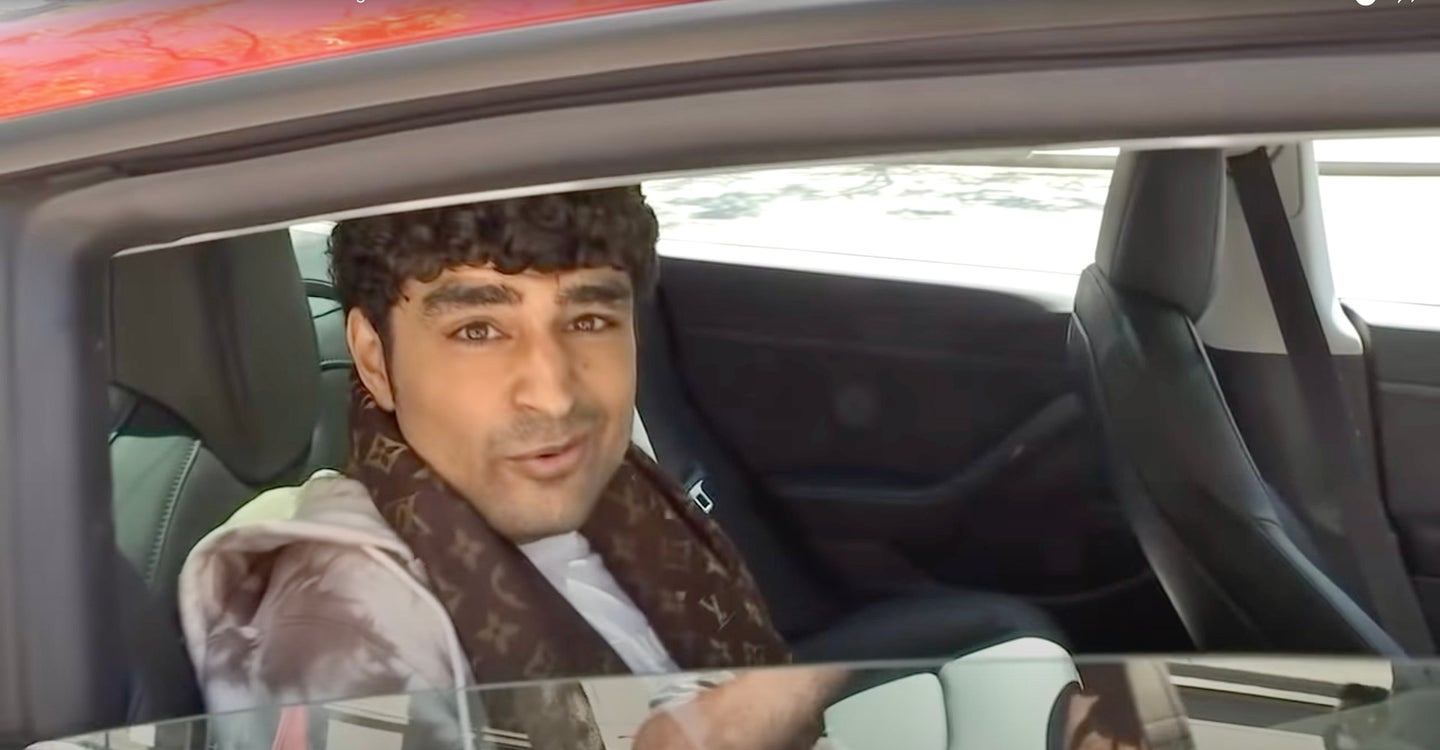 Just yesterday we told you about a serial Autopilot abuser—a man who has caused an uproar online after constantly posting videos of himself riding in the back seat of his Tesla Model 3 while Autopilot keeps the car on the road. Today, however, just two days after being arrested and having his Tesla confiscated, he's back at it again—in a new Tesla. As the saying goes: old habits die hard.

25-year-old Param Sharma is back to posting videos of himself doing the very thing he was apprehended for, though this time with a new Model 3 that he claims to have bought right after getting out of prison.

California police announced on Tuesday that they had arrested Sharma on May 10 for two counts of reckless driving and disobeying a Peace Officer after receiving complaints of a man riding in the back of a Tesla Model 3 while nobody was behind the steering wheel. Police impounded his Model 3 for evidence in his upcoming trial, which is scheduled for July.

Within 18 hours after being released, Sharma was once again posting videos on Instagram from the back seat of another Tesla.

Sharma believes that by mid-2022, "the backseat thing will be normal." However, legal experts and engineers disagree. Advanced Driver Assistance Systems like Tesla's Autopilot are still very much in their infancy. Even automakers like Honda are just now rolling out Level 3 ADAS tech on very limited scales, and hands-free systems like GM's Super Cruise and Ford's BlueCruise are still very much limited in their operational design domain.

Documentation obtained via a Freedom of Information Act request by PlainSite revealed that CJ Moore, director of Autopilot at Tesla, said that Elon Musk's predictions of Level 5 autonomy by the end of 2021 "does not match engineering reality." And even when Tesla (and other manufacturers) believe that the technology is acceptable for road use, regulatory requirements in the United States will still need to agree.

Still, Sharma has no intentions of stopping anytime soon.

"I'm rich as f**k. I'm very rich," Sharma told KTVU, later continuing, "I mean, I'll just get another Tesla every time. I have unlimited money to blow on Teslas. Like, if you take my Tesla away, I will get another Tesla."

Sharma has pleaded not guilty to his reckless driving charges and intends to contest it in court, but it's unlikely that he will get off easily.

Steven Clark, a legal analyst in Santa Clara, gave KTVU his impression of what he believes Sharma's legal battle will look like: "What I think you’ll see is his first court date is the judge give him a very stern warning and say, ‘You are not to drive unless you’re in the driver’s seat of your vehicle. And if you do, we’re gonna put you back in jail.'"

Actions like this show a clear disregard for the safety of others, or simply an overestimation of Autopilot's limits. Videos posted to social media have captions like "came outta (sic) the pandemic in a self-driving car," hint that it may be the latter in Sharma's case, because despite Tesla calling a subset of its Autopilot suite "Full Self-Driving," it still requires someone at the wheel of the car.

According to KTVU, Sharma does not believe that he poses a real safety risk.

Not only is he wrong, but what he's doing is also quite illegal. The California Department of Motor Vehicles requires any automaker who wishes to operate advanced autonomous vehicles to seek permission from the DMV. Prior communication between the California DMV and Tesla indicates that they have not yet requested this as of several months ago and that Tesla's current beta build of its FSD software is intended to be a Level 2 driver assistance system.

Police could likely re-arrest Sharma today for the video evidence he has supplied to KTVU of him breaking the law. And his expressed intent of continuing to break the law likely won't help his court case.

The man taunted police on social media just hours before being arrested.

A Tesla VP claims adaptive cruise control was engaged, but that “all seat belts post-crash were found to be unbuckled.”

Sometimes you gotta nap on the fly, but this is not how it works.