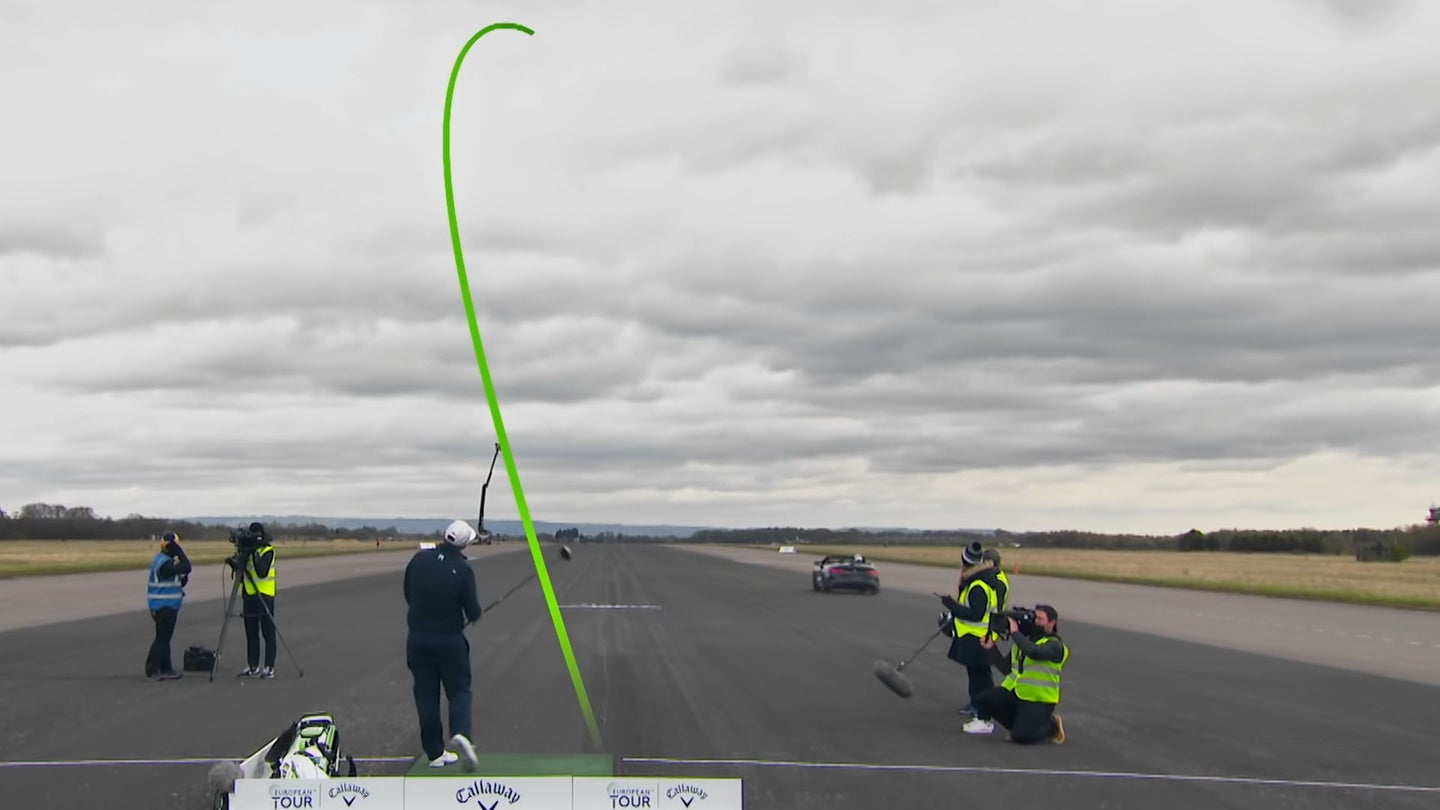 Even if the last time you played golf the word "mini" was involved, you can appreciate when big-deal world records get broken in the sport. No, we're not talking about boring stuff like the world's longest drive, we're talking about a car-related record, of course.

Last week, the PGA's European Tour released a video chronicling the process behind breaking the world record for the longest golf drive into a moving vehicle. The previous record was set in 2012 with Jake Shepherd doing the golfing and F1 driver David Coulthard doing the driving. At 273-yards, it was a tall order to beat, but Golfer Marcus Armitage and British Touring car champion Paul O'Neill stepped up to the challenge.

The duo successfully landed a golf ball in a car at 303-yards, the equivalent of 909 feet, but it didn't happen on the first try, though. The record took several botched attempts down a runway, one shattered windshield, and one 2021 BMW M8 Competition Convertible.

The M8 convertible in question was unmodified, although even without being altered, it was the right tool for the job. In the clip below, you can see the car takes off before the ball is actually driven down the runway, and more than a little performance is needed to get to the ball's final destination in time.

The M8 is also a good car to use because, well, it's big. If you haven't seen some of the memes concerning the scale of the racing version of the vehicle—they're worth seeing. At 191.2 inches long, it provides an ample landing zone for a golf ball.

The duo of O'Neill and Armitage work well together, scoring a landing in the car within the first several attempts. Unfortunately, however, it was short of the record. After what seems like dozens of additional tries—and several strikes to the BMW's windshield—they finally land a drive in the car past the record point of 273 yards. The distance was verified by the Guinness World Records organization, so it's pretty much indisputable.

There's actually a video of the last record as well, which is a bit more impressive. The last time around the car used was an SLS AMG convertible, which only has two seats. That's a much smaller area to land a golf ball in.

It seems like it took fewer attempts the first time around as well, although that might make sense with an F1 driver behind the wheel. I know nothing about golf so I can't comment on the quality of golfers.

But in any case, even if our friend David Coulthard had a bit of a tougher job than Paul O'Neill, the new record is impressive. It's also a great excuse for DC to get back in the car and try to break the record again. Now that's a pointless rivalry we can get behind.

The 330e feels like a salad BMW had to quickly take care of before moving on to the steak that is the M3.

The 1,825-HP Bugatti Bolide’s Outrageous Aero Gets Inspiration From a Golf Ball, of All Things

An innovative air scoop creates 10 percent less drag with a 17 percent decrease in lift at 200 mph.

It’s a heck of a drive-in movie machine, though.