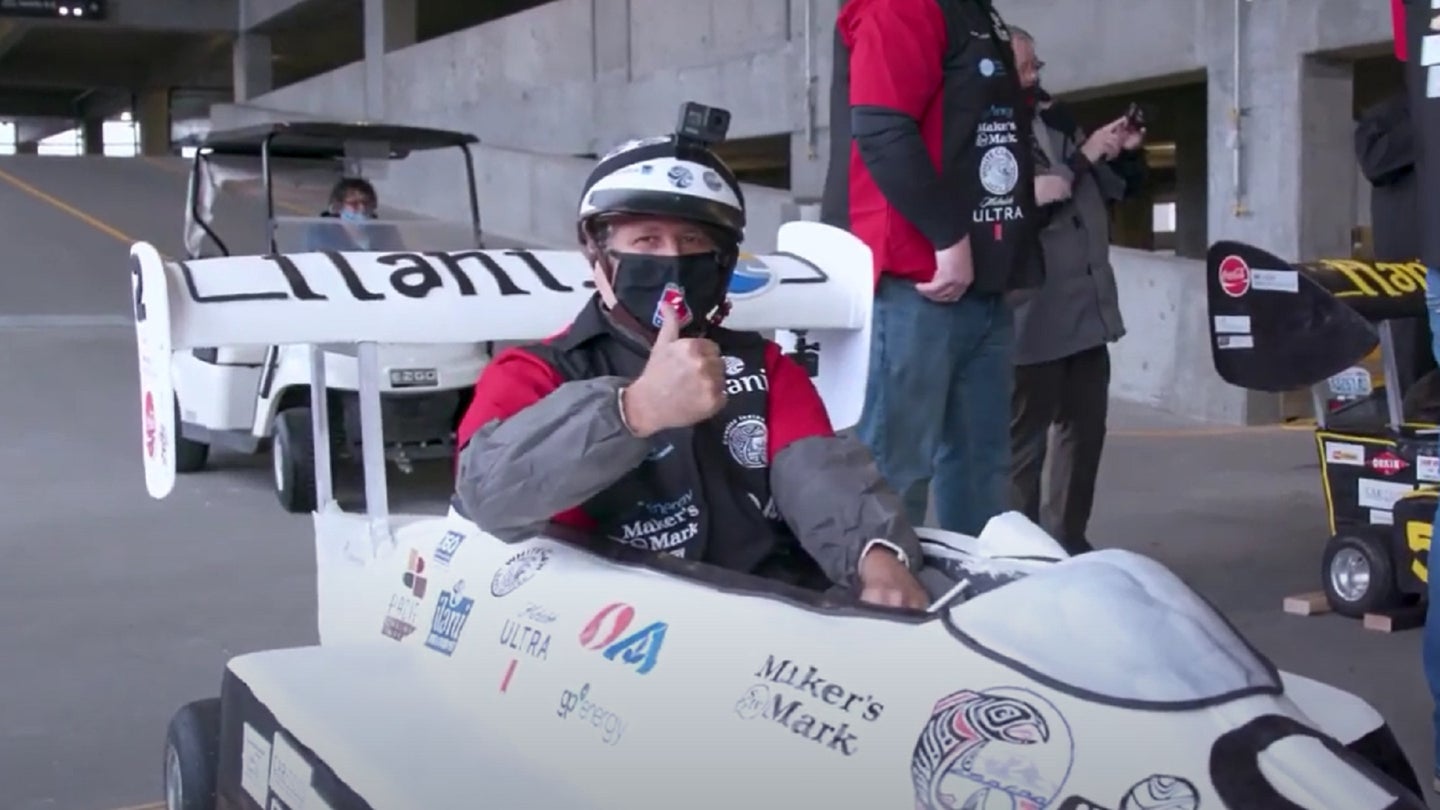 A Guinness Book of World Records entry exists for just about anything you can think of. There’s the world’s largest banana car, the world’s longest limousine, the largest parade of Volvo cars, even the world’s hairiest car (may I say…ew?). As of a couple of days ago, a new record-holder is (literally) the icing on top: the fastest edible car.

Constructed on an aluminum chassis, the 649-pound car took a team of nine people 46 hours to build, led by celebrity cake artist Mike Elder. The Black Sheep Custom Cakes owner and Food Network guest set a similar record in the past, and he came up with this race to benefit the opening of the ilani casino on the Cowlitz Reservation in Washington. He and the team built two edible cars–one white, one black–and Elder raced race car royalty Michael Andretti down a parking garage ramp. (Spoiler alert: Andretti won.)

The car Andretti was piloting was a replica of his 1991 IndyCar National Championship race car, and Elder’s car was modeled after a race car Andretti’s father Mario had driven in a race.

“I’ve driven a lot of vehicles, and this was by far one of the most unique,” Andretti said in a press release distributed by ilani.

Earlier this year, we featured a TikTok-famous baker who created a nearly full-size cake version of a Land Rover Defender, including an edible engine; it wasn't drivable but it fed more than 2,000 people, so that's worthwhile in my book. Per Guinness Book rules, Elder's car had to be 90% edible to qualify. The cake artist, who once owned a hot rod shop, started with a superlight aluminum chassis fitted with axles and wheels that weighed about 65 pounds in total. For Andretti’s car, the team of bakers piled on 139 sheet cakes with a heavy hand of buttercream frosting and a sheet of fondant to seal it all together. Even the sponsor stickers were edible. Elder’s car was made up of 145 sheet cakes with buttercream and fondant and then painted with food-grade black coloring. Each car was about 12 layers of cake tall at the cockpit level.

The car Andretti was steering set both Guinness Book of World Records benchmarks: fastest edible vehicle at 17.08 miles per hour, and longest distance covered by an edible vehicle at 349.81 feet (a little more than the length of an American football field). A footnote to Elder's records is a rule that the edible car had to be consumed afterward, so Share Vancouver, a homeless outreach organization, helped to distribute pieces of the cake car after the drive was finished.

I'd say that beats the hairiest car record any day of the week.