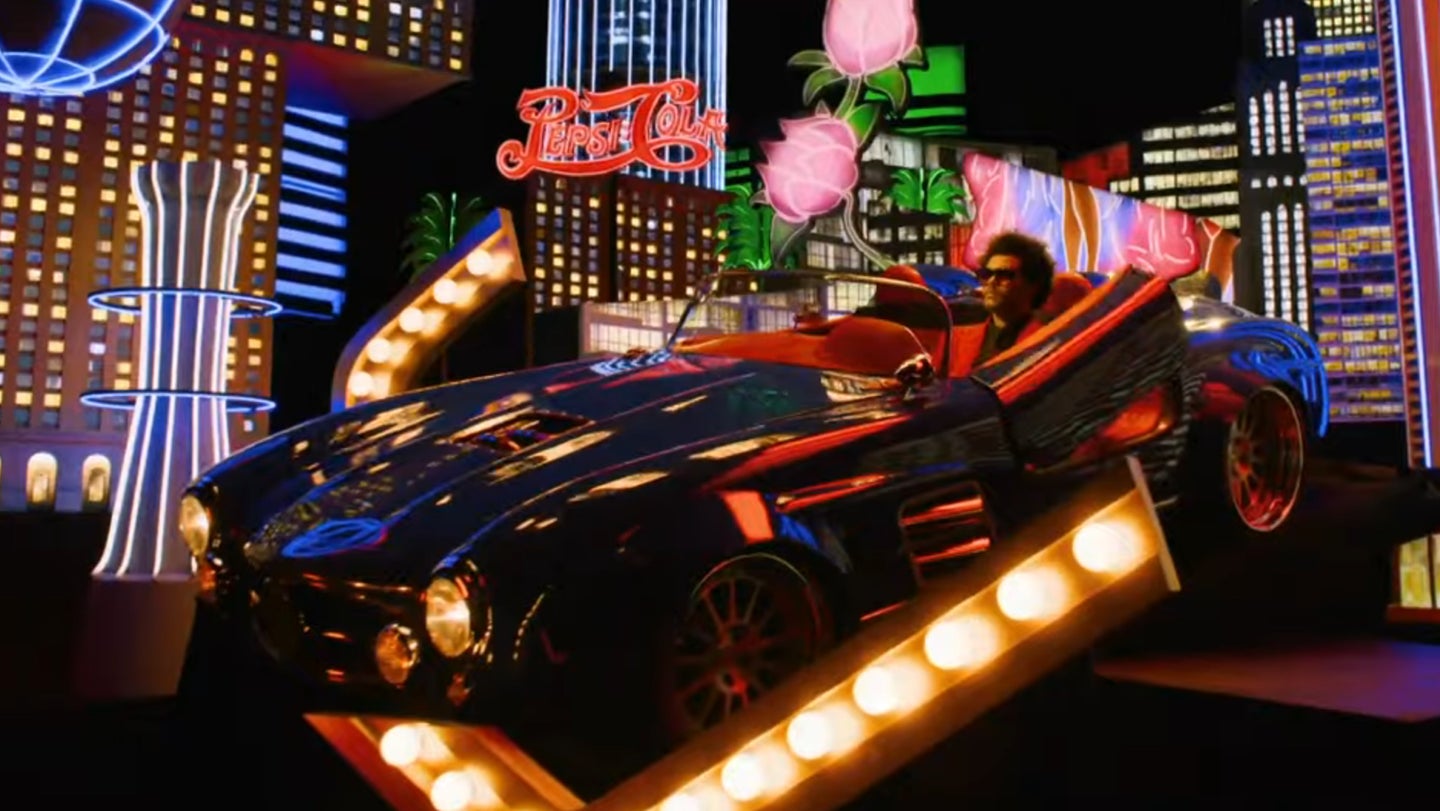 The Weeknd's Super Bowl LV halftime show didn't just act out how we all look when we hit Pick-N-Pull thirty minutes before it closes—it also included a brief glimpse of a really cool car in the dark. That car is S Klub's incredible 1955 Mercedes-Benz 300 SL restomod, which hides the guts of a supercharged V6 2002 Mercedes-Benz SLK 32 AMG underneath.

Everything besides the brevity of the S Klub 300 SL's screen time makes sense. The Weeknd's been a Merc man for a while, as he signed a promotional deal with the company that put a brand new Mercedes-AMG GT Roadster and a Mercedes-Benz EQC electric SUV in his Las Vegas-set "Blinding Lights" music video, per Car and Driver. The opening of the halftime show had a stylized version of Vegas as a nod to that music video, so it naturally called for a sleek modified drop-top Benz.

S Klub's John Sarkisyan confirmed that his 300 SL restomod was the car at the Super Bowl on Instagram, posting a photo of the low, sleek roadster under the "Welcome" sign from the halftime show.

Sarkisyan rose to fame through Porsche builds, which led to a 300 SL Gullwing coupe and then this 300 SL speedster, per Motor1.

Hoonigan Autofocus took a deep dive into the S Klub speedster build, which features a cutout in the hood to show off the SLK 32 AMG's supercharged V6.

It's instantly recognizable as a 300 SL, but so, so different.  The car is a 2002 SLK 32 AMG underneath, just like S Klub's previous 300 SL Gullwing coupe. The SLK 32 AMG's wheelbase is the same as the 300 SL's, which made the body swap easier. That means there's all kinds of hidden modern comforts underneath the retrofitted 300 SL-style dash, like power steering, air conditioning and a McIntosh stereo.

It only took S Klub four months to turn the 300 SL from a bare shell of a coupe into the incredible speedster we saw at the Super Bowl, complete with a bright red leather interior with Porsche Speedster seats, matching red accents, a Porsche 356 Speedster windshield, an Airlift air ride, bigger Brembo disc brakes and wide fender flares over huge HRE wheels, among many, many other upgrades.

Most of the body is fiberglass, and it kept the character lines going down the side of the 300 SL despite adding the fender flares, which Sarkisyan said was incredibly tough. S Klub didn't skimp on the real 300 SL parts, either, keeping things like grilles, headlights, taillights and badges—all of which were designed to fit into S Klub's body. The grille, for example, was purchased new from the Mercedes Classic Center. Sarkisyan notes that Mercedes keeps a craftsman on staff who hand-makes classic 300 SL grilles just as they were when the 300 SL was new.

When the Hoonigans shot the car, Sarkisyan said that there were four other fiberglass 300 SL bodies sitting at the S Klub shop, just in case this sort of build interests you.

The four big exhaust pipes sticking out of the 300 SL's front fenders make that V6 loud enough to echo off every corner of a football stadium, so what gives? Why not more screen time? Clearly, we should've seen this 300 SL restomod sliding around like the AMG GT from "Blinding Lights."

AMG’s 720-hp track rat is more than 1.3 seconds quicker around the Green Hell than the Aventador SVJ.