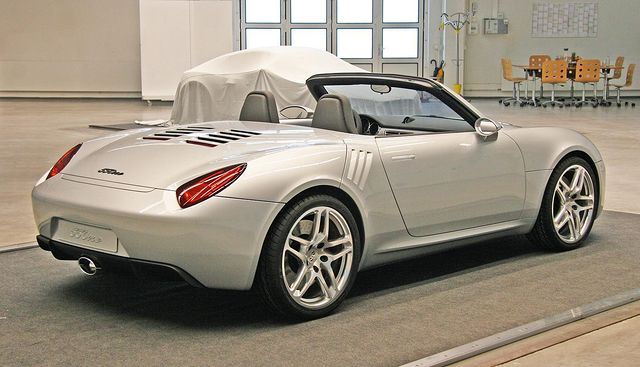 Long rumored but only recently confirmed, the fact that Dr. Ferdinand Piech ordered Volkswagen design head Walter De Silva to craft a modern-day “Lil’ Bastard,” the Porsche that legendary actor James Dean was killed in, is now solidly out of the bag. And now that the legendary designer is retiring, he's posted the car on his own Instagram page.

“2008 - Porsche 550one The Little Bastard Design by Walter De Silva, Peter Wauda, Christian Felske, Romi Rost. Project wanted by Prof. Dr. Ferdinand Piech,” the Porsche family patriarch who was in charge of all that was Volkswagen, the post says.

What Piech wanted was almost always made to happen somehow, and De Silva began working on a midengined roadster with lines inspired, but not copied from, the original 550. It was even silver like Dean’s car.

As for Dean, it is difficult to overstate what a cultural icon he was on Sept. 30, 1955, when he and his mechanic were driving on a two-lane California highway near Salinas en route to participate in a race. A Ford wagon made a left turn in front of Dean, and the cars collided. Dean suffered a broken neck and was pronounced dead that evening. The Lil’ Bastard was damaged beyond repair.

So it was an important part of Porsche’s early years in the U.S.—if James Dean had one, they must be cool. Millions of teenaged girls wept into their pillows. Dean was awarded the Oscar that year posthumously, and “Rebel Without a Cause” became a rallying cry for young men. It was as if the Elvis of actors had been killed.

That Piech and the rest of the staff, as confirmed in an October story in the Italian periodical Quattruote, referred to the new car as “The Little Bastard” seems a bit indelicate, but that’s the name Dean had customizer George Barris paint on the rear deck, so it’s fair game.Piech died in 2019 at age 82, so he isn't talking. Not that he ever did much anyway.

That said, what about the car? What we know can only be derived from photos, and it’s clear it’s a small car with vents to cool the mid-engine. What engine? We don’t know, and photos of the interior show a gated manual transmission, of course. Parts of the design appear to have migrated slightly to the Boxster, another De Silva production. But the 550one would have clearly been more sporting than the Boxster. There's a single-center chromed exhaust, and three vents on each side, and more on the deck lid. Wheels are 10-spoke alloys. Interior door handles are the pull type.

So what happened? According to Quattruote, in simple terms, the Macan happened. Porsche needed the smaller SUV worse, so it was financed, and the Little Bastard was hidden away, never shown to the public, never spoken of again. Until now.

James Dean’s Rebel Without a Cause Jacket Up for Auction

The most valuable piece belonging to the American rebel and heartthrob can now be purchased.

Did George Barris Fabricate The Curse Of James Dean’s Spyder?

What’s true and what is a Barris falsehood? Regular Car Reviews tries to find the truth.