The E-GMP platform promises economy, performance, and some tricks up its sleeve that will set it apart from the competition. 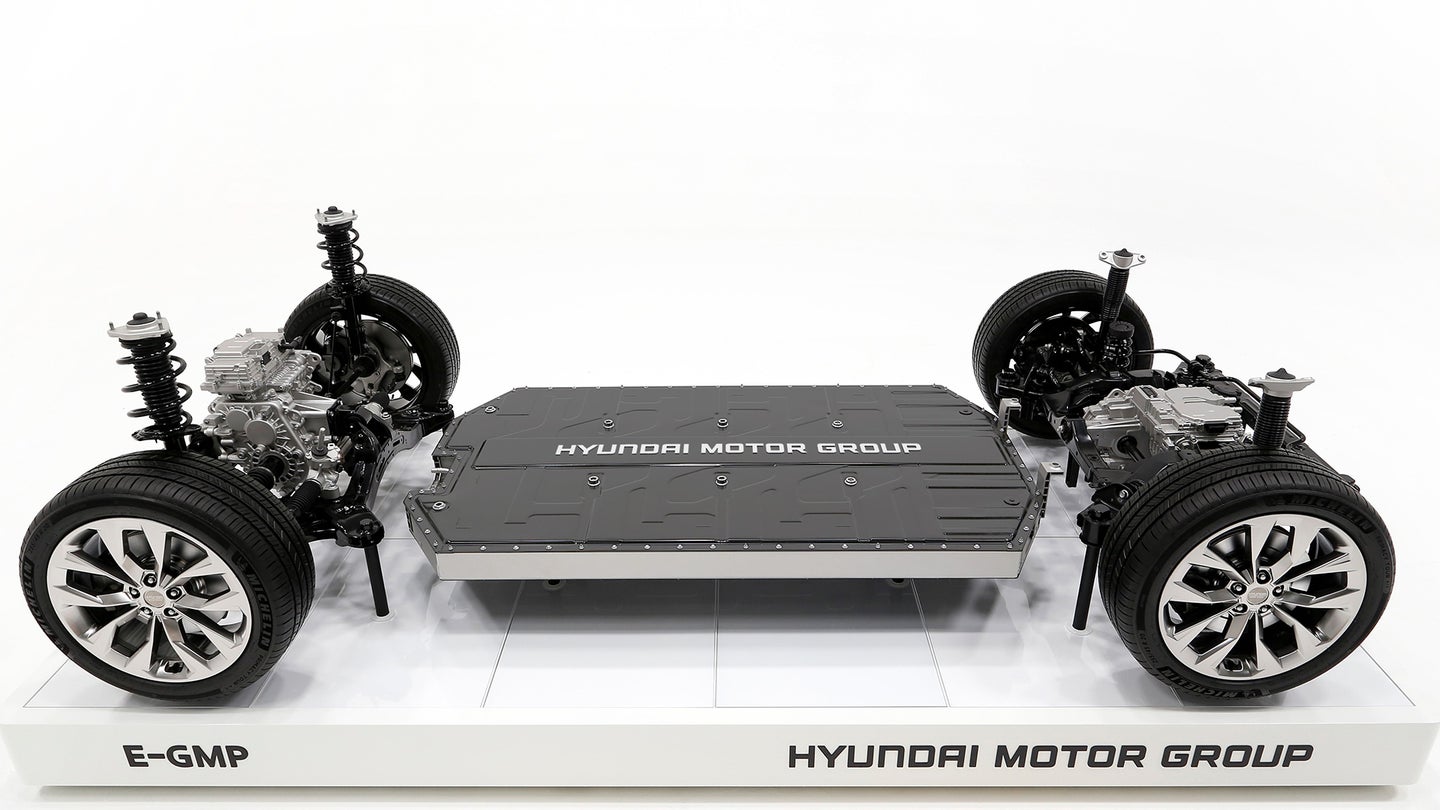 Hyundai has been teasing its modular electric vehicle platform for quite some time. Now, more than a year after the first mentions of a dedicated testbed, the South Korean automaker has officially unveiled its plan to electrify its lineup using its all-new Electric-Global Modular Platform, dubbed E-GMP.

The automaker believes that the key to the E-GMP's success will be its modularity, something which becomes even more possible when using compact powerplants like electric motors. The platform will serve as the underpinnings for 23 of the upcoming Hyundai group EVs in the next five years. That includes offers from across the Hyundai, Genesis, Kia, and all-new standalone Ioniq brands.

To achieve such modularity, Hyundai has figured out something that many other automakers are also capitalizing on: the skateboard. This means that the automaker has chosen a unified underlying architecture that packages the batteries, powertrain, drivetrain, and suspension—one that can be stretched and sized to meet the various needs of cars, crossovers, and SUVs in the manufacturer's lineup.

Being an electric car, most people will immediately jump to the battery. Unlikely Tesla which uses cylindrical cells to make up its battery packs, Hyundai has chosen to use pouch-type cells in order to reduce complexity and maximize overall space. While Hyundai was fairly vague with pack size, the automaker says that it has targeted over 310 miles (500 kilometers) as the plausible range for vehicles built on the E-GMP platform.

But it's not just about the battery, it's also about how the vehicles can put the power to the ground. Hyundai also noted its tightly-packaged electric motors which used unique magnetic coiling designs to be ultra-efficient.

Hyundai's in-house built motor has allowed the automaker to take control of efficiency while still allowing it to build a platform capable of powering a performance vehicle. That begins by raising the overall motor speed by a whopping 70 percent compared to its existing EV offerings on the market today, allowing the vehicle to output as much as 600 horsepower from its system. Additionally, the automaker has worked some magic with its gearing to improve efficiency while allowing the vehicle to feel quite torquey on the road.

Each motor will be packaged together with a Hyundai-built inverter and transmission, allowing for both single and dual motor configurations in the platform. Single-motor vehicles will place the power down at the rear of the car, while dual motors can provide torque to all four corners. Hyundai says that its dual-motor cars can also uncouple its front wheels from power on demand for improved vehicle efficiency.

But it's not only about efficiency, it's also about fun and building a memorable vehicle that isn't just some econobox appliance. Hyundai will soon reveal a performance offering built on the E-GMP platform to showcase just how electrification can meet the need of every customer. The automaker says that its high-performance vehicle will be capable of sprinting from zero to 60 in less than 3.5 seconds and continue climbing to a top speed of nearly 162 mph.

Consumers will also care about how quickly it will take their vehicles to get from point A to B, but not just from a speed factor. Hyundai's capable system will still eventually need to be recharged, and that's where its 800-volt capable architecture comes into play.

Charging the vehicle from zero to 80 percent will take just 18 minutes, allegedly. Of course, if you don't have that time to spare, plugging the car in for a mere five minutes will result in about 60 miles of range, which should be enough to make a quick trip to the grocery store or hold most people off until they can charge their vehicle at home later that day.

A more interesting note is that the E-GMP platform doesn't just take a charge from the grid—it can also share that stored energy for other purposes. Hyundai says that its vehicles will also be able to be used as a large battery pack, inverting power for use with appliances on a campsite or even sharing its charge with other vehicles. In total, its vehicle-to-load feature supports around 3.5 kilowatt-hours of power, which is enough to power a medium-sized air conditioner or 55-inch television for about 24 hours.

Hyundai's E-GMP will make its first appearance in the sharp-styled Ioniq 5 crossover when it launches as early as 2021. The automaker says that it will provide the underpinnings for 23 total battery electric vehicles in the next five years, including at least 11 dedicated BEV-only models such as the Ioniq 5, 6, and 7.

It isn’t the ‘N’ model we were hoping for, but it leaves other Sonatas in the dust.

If the startup’s new “sport vehicle” is even half as fun as this looks, then hey, we’ll take it.