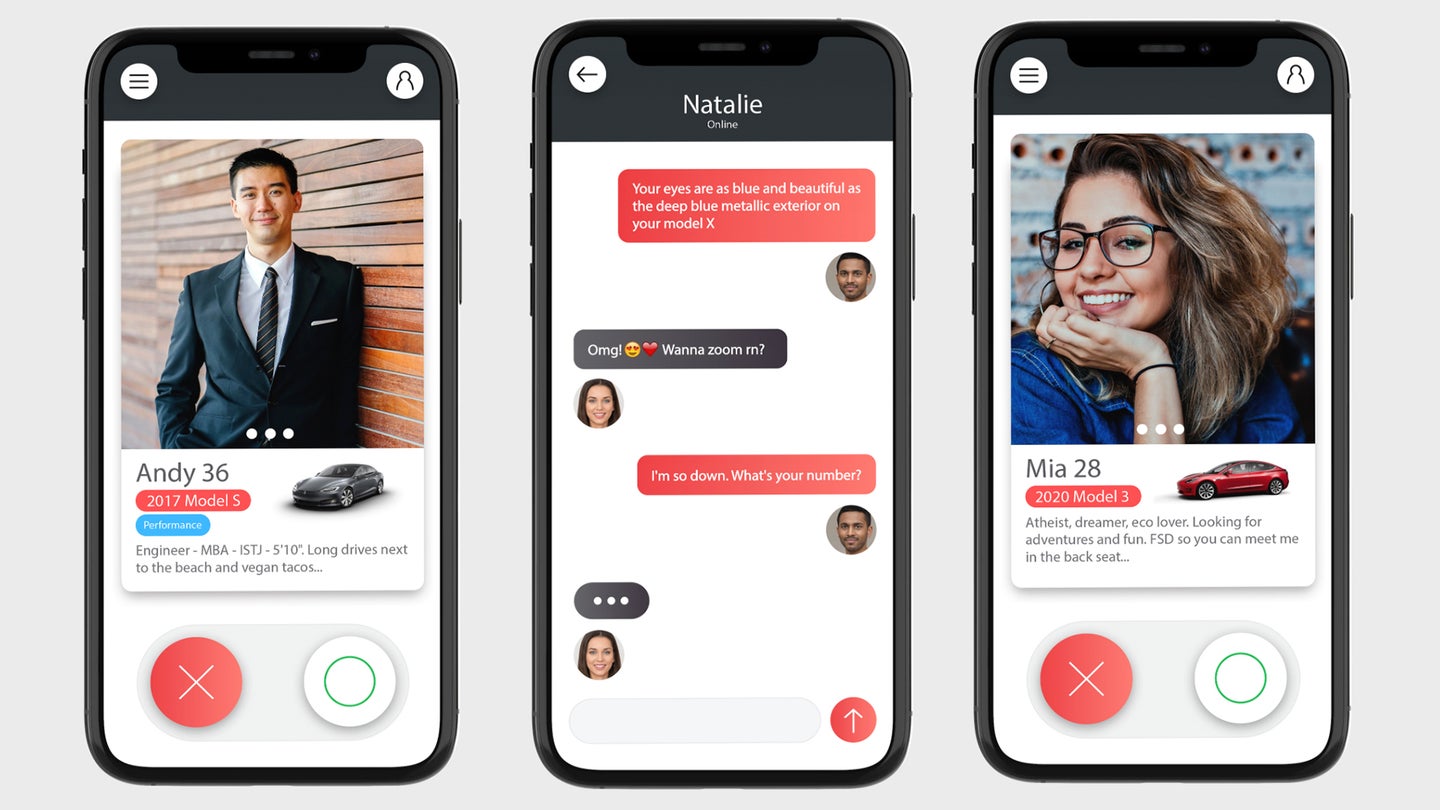 Even before the era of social distancing and closed bars, finding love online was no easy task. We can only imagine the struggle is magnified if you’re the type to only allow yourself to date those who drive the same car as you. Sound ridiculous? Say hello to the Tesla Dating app, a Tinder substitute for Tesla owners catering to, as the app’s official site puts it, "an exclusive community of like-minded Elon stans." Prospective users must provide photographic evidence that they do, in fact, own a Tesla car.

Yes, people, this is a thing. 2020 really is the gift that keeps on giving.

Created by Canadian self-proclaimed “e-commerce entrepreneur” and Tesla fan Ajitpal Grewal, Tesla Dating is still in the early stages of development, according to Business Insider, but is currently accepting signups for early access on its site. Grewal says the idea came to him when he realized Tesla fanatics really liked to talk about their Teslas…and, presumably, Supreme Leader Elon’s latest Twitter stunt.

"It became a big part of their identity, and they shared a lot of the same values, like wanting to reduce their impact on the environment, stanning Elon Musk, or appreciating high tech," he told BI. "Suddenly it hit me, these people would be perfect for each other."

A bit like how YouTube uses algorithms and math to show you videos it thinks you might be interested in, Tesla Dating takes the particular Tesla you own into account when recommending matches. "I believe your car tells a lot about you as a person," said Grewal.

Some outlets say it might all be a piece of satire, though Grewal sounds pretty gung-ho about it.

As delicious as this cake of hilarious obnoxiousness might already be, the real laughs come in the form of Tesla Dating’s sample screenshots, such as this ultra-realistic exchange with “Natalie.”

Or atheistic Model 3-owner Mia, 28, who is just looking for someone to meet her in the backseat of her Tesla while it doesn’t drive itself.

Also, engineer Andy over here (who owns a 2017 Model S Performance don’tcha know) would be an ISTJ. Ugh.

All joking aside, we sincerely hope lonely souls of all automotive leanings find love and happiness one day. If the path to your bliss involves a Tesla owners-only mobile app, then, y'know, we can't really judge ya. However, we can't make any promises on behalf of the guests at your inevitably Tesla-themed wedding.