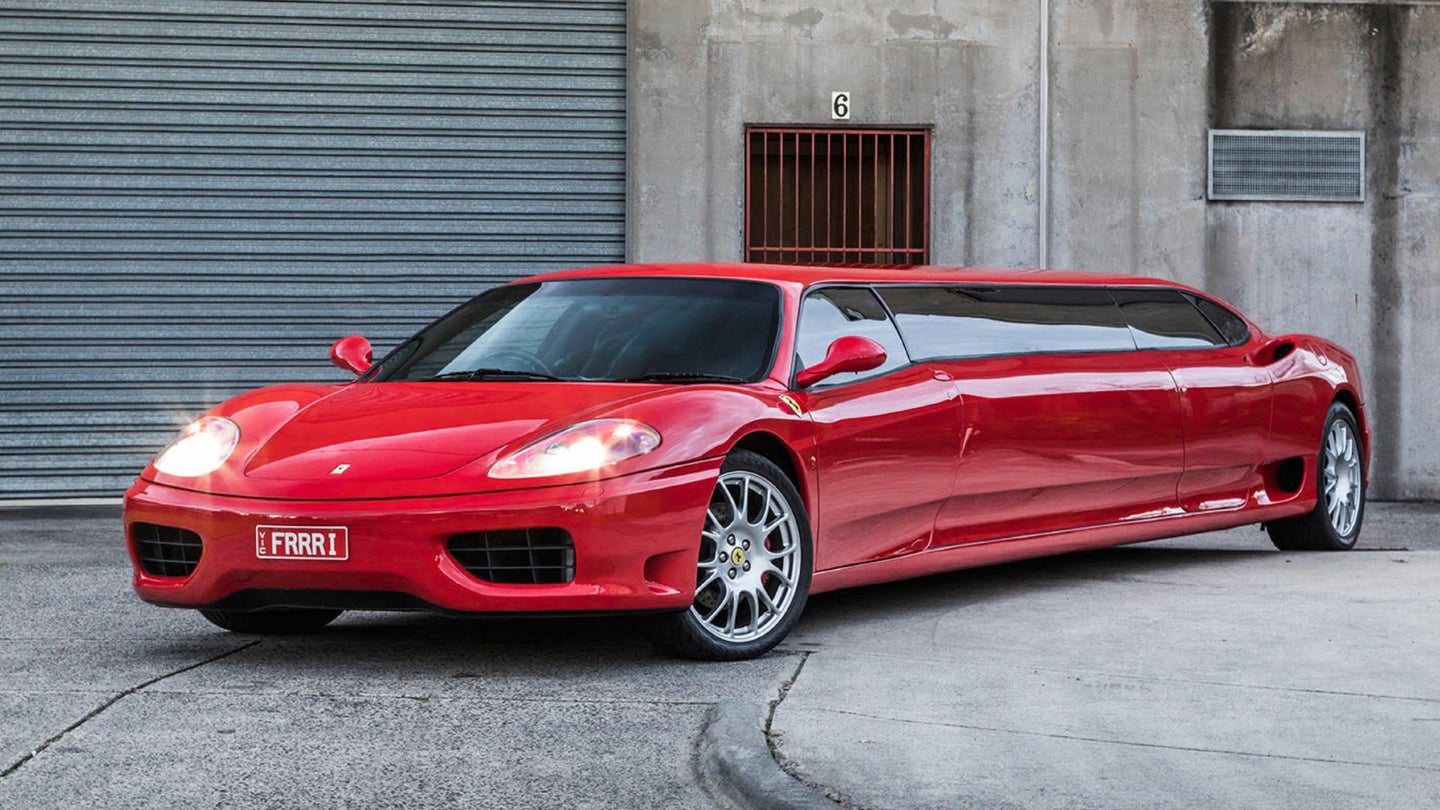 The Ferrari 360 Modena is lustful for many reasons—its pedigree, its speed and its near-perfect, mid-engined proportions. That last bit is what we're focusing on here, as the Modena in question has been stretched to fit six passengers behind the two front seats. It might sound strange, and that's because it is, but the seller is sure that someone out there will want it enough to dish out around $285,000 USD.

The Ferrari limo is listed on CarSales and located in Australia. It's not necessarily the first of its kind, though it's certainly designed to party. The Resale Red Prancing Horse lived the life of an exotic sports car for nine years in the United Kingdom before it was brought down under in 2012, where a man named Scott Marshall got his hands on it. In an interview with Street Machine, Marshall described using an air hacksaw to “cut the bastard in half” to turn this premium GT car into an eight-seater party-mobile. Nice.

Cutting it in half was the easy part. Then came adding the aluminum extension rails and the rest of the body sculpted out of fiberglass to keep the weight down. To improve the ride quality and prevent it from getting beached driving over speed bumps, the car was fitted with air-ride. Inside are genuine leather seats, two TVs and a minibar with LED accents. Passengers enter the limo via rear gullwing doors for an added touch of flash, as if it needed any more of that.

The limo conversion added over 2,400 pounds to the Ferrari’s original fighting weight. The 3.6-liter, 400-horsepower V8 remained unmodified during the build, and the manual was later ditched to make it easier for the chauffeur to maneuver. In its place, as Marshall explained to Street Machine, is the automatic from a Subaru Legacy GT. It sounds sacrilegious, but do you really want to be riding in the back and suddenly spill champagne on yourself because the chauffer’s foot slipped off the clutch?

Why would anyone want this car? For the money, of course. You can charge top hourly rates for a Ferrari limo because the odds are you’ll have the only one in town. It’s a limo that sounds like a Ferrari because it is. The car may no longer be able to gracefully clip an apex or launch off the line, but who cares when you’re on your way to a wedding, a bachelor party, or senior prom at 45 miles per hour. The only detail that matters is listening to that Italian V8 singing in the backdrop of a party playlist.

Give your credit score a real workout in the world of high-end auction leases.