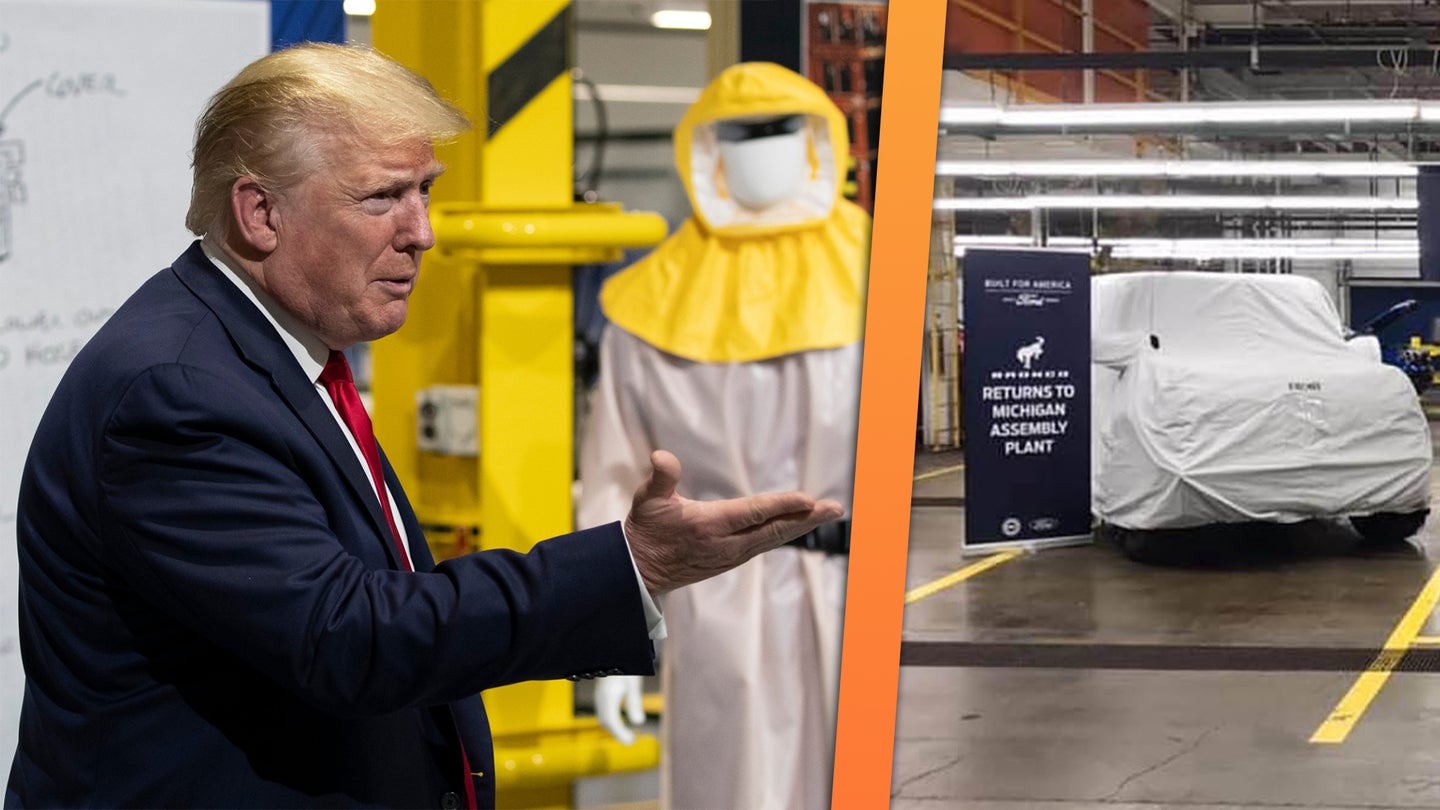 As we know, President Donald Trump paid a controversial visit to Ford's ventilator plant in Michigan last week. But we're not here to talk politics—today, we're digging into rumors that surfaced after the event, namely a report that company executives may have held an exclusive 2021 Ford Bronco reveal party for the commander in chief. As The Drive has since learned, though, it didn't happen.

A surreptitious photo posted to the Bronco6G forum last week depicts a Bronco under a sheet and parked next to its Ranger pickup platform-mate during Trump's Thursday trip to the Rawsonville facility. This is helpful for size comparison, as we've not seen a full-size Bronco alongside another model to this point. It looks slightly taller than the Ranger with a higher hood line; the rest of its boxy silhouette is as expected from previous leaks of the highly-hyped off-roader.

There was immediate speculation that this photo was taken shortly before or after President Trump got a sneak peek of the truck during the closed-door portion of his visit. A Ford spokesperson confirmed via email, however, that the camouflaged Bronco was brought in solely as a way to generate excitement for workers. While it might make sense for Ford CEO Jim Hackett and Chairman Bill Ford to court the president given their past differences on trade and foreign manufacturing, it appears they didn't use the new Bronco to do so.

Likewise, President Trump didn't mention any specific details about the Bronco during his speech at the Ypsilanti plant, but he did commend Ford for adding 2,000 jobs as part of the model's production. This news was actually announced in December, though he had several nice things to say about the Blue Oval, as well as General Electric, General Motors and Fiat-Chrysler. Detroit's Big Three restarted production just over a week ago in a significant boost to the country's recovering economy.

Trump did call the Bronco a "big winner" and a "great success," even though it isn't yet available to the public.

We've seen what we believe to be the real 2021 Bronco undisguised before, though we're still left guessing as far as powertrain specifics go. We expect it'll share the 2.3-liter EcoBoost four-cylinder with the Ranger, though it's possible that the SUV could also boast a 2.7-liter EcoBoost V6 from the F-150. The automaker's 10-speed automatic is essentially a shoo-in for production, while a seven-speed manual transmission could be introduced to help compete with its main rival, the Jeep Wrangler.