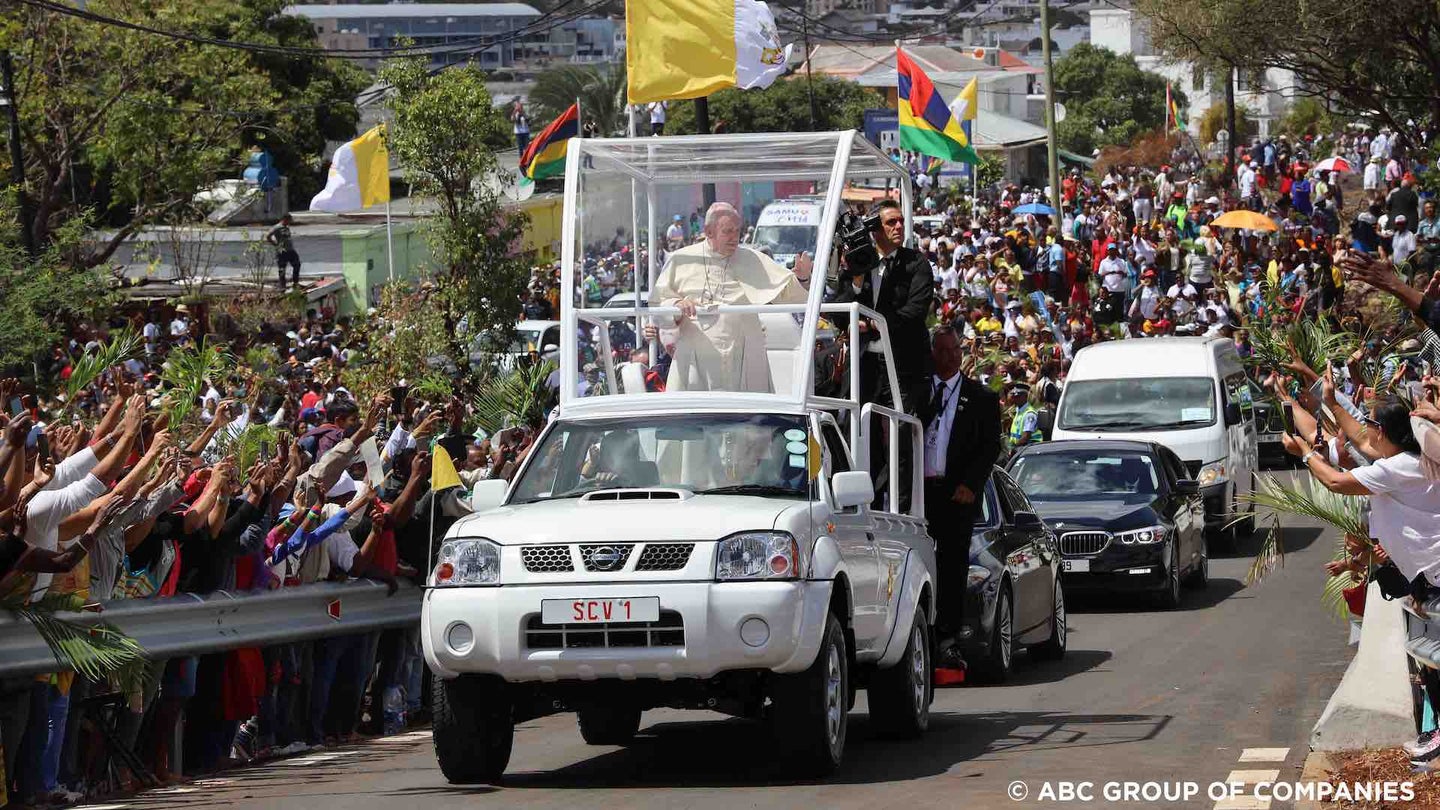 This past September, Pope Francis toured Mozambique, Madagascar, and the Indian Ocean island of Mauritius, where he finished his journey in yet another odd Popemobile: A first-generation Nissan Frontier.

The Vatican contracted local Nissan subsidiary to supply a one-off Popemobile for the Pope's eight-hour-long visit to the island nation. NSC ABC issued the base truck (sold locally as the NP300 Hardbody) to the company's coachbuilding wing, ABC Coachworks, which normally up-fits commercial vehicles such as fire engines, police cars, and buses, but relished the job of building the totally new class of vehicle under the watch of the diocese of Mauritius.

The truck bears a special "SCV 1" license plate; an acronym for "Status Civitatis Vaticanae," or Vatican City State reserved for His Holiness' rides. In its bed, ABC Coachworks mounted an elevated seat, which sits beneath a presumably shatter-resistant pane of glass. Since the Pope's visit, the island's diocese has had the truck put on permanent display as an exhibit for Mauritian islanders.

Unlike the Popemobile of Benedict XVI, Pope Francis doesn't travel in a fully enclosed, bulletproof Mercedes-Benz M-class, which he has described as a "sardine can" that distances him from his Catholic followers. Instead, he has a track record of preferring vehicles more pedestrian than those of his predecessor, which started in 2013, when he accepted an Italian priest's gift of a Renault 4 according to The Telegraph. Pope Francis alarmed the Swiss Guard by simply driving off in the vehicle almost unaccompanied, and before an inspection could be performed.

Since then, Pope Francis has also been seen puttering around in an older Ford Focus that belongs to the Vatican's motor pool. During his travels, the Pope has sometimes been spotted riding in a Fiat 500L. The only time Pope Francis ever owned a vehicle as high-status as himself—a Lamborghini Huracan offered as a gift—he had the supercar sold off for charity.

The iconic partnership began with the production of a 5.9-liter inline-six for the 1989 Dodge Ram.

The current Frontier has a loyal following. Will the new truck widen its appeal?