Take a Continental GT, add tank-style rubber tracks where the wheels used to be, and voilà! Mayhem, in car form. 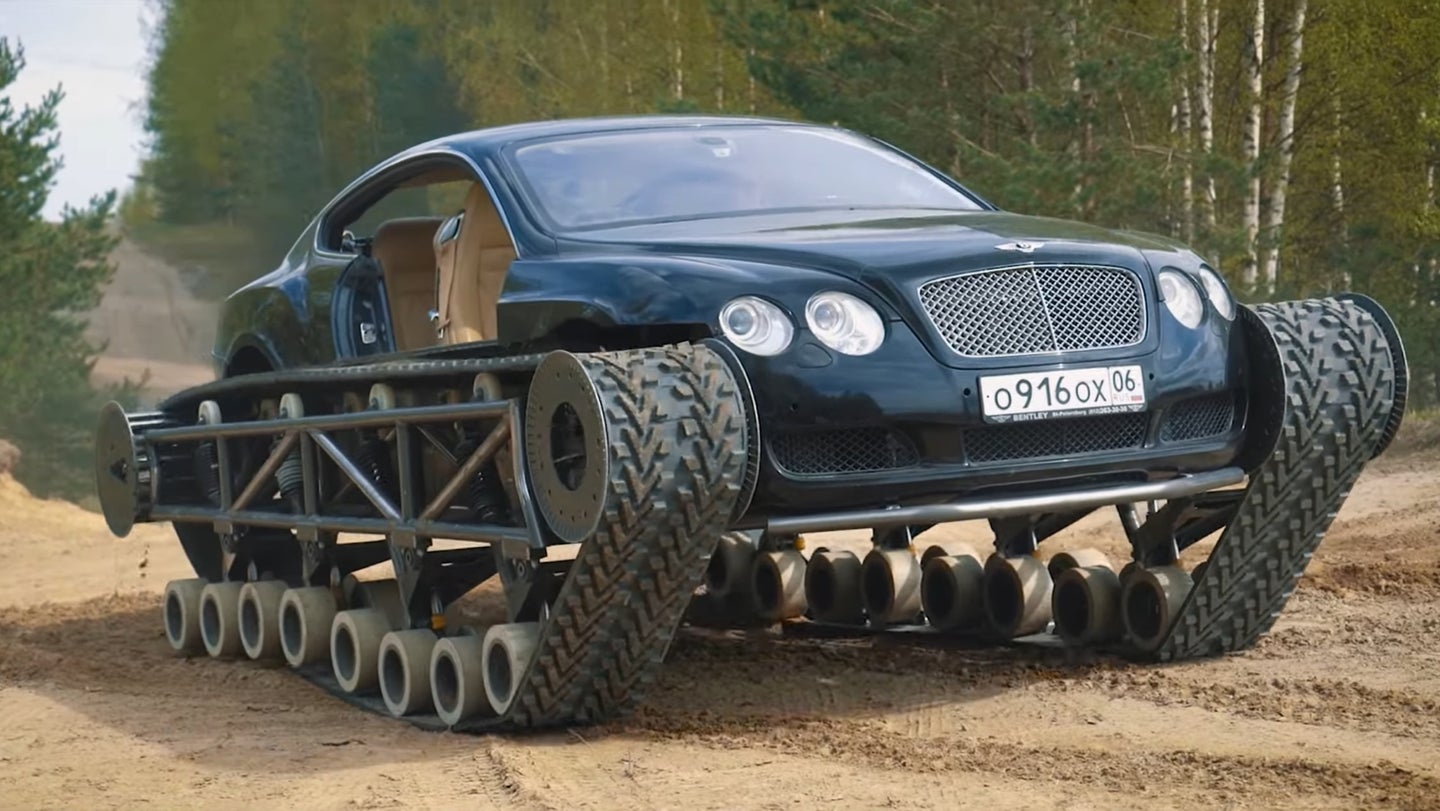 Was the Bentley Continental GT always just a bit too tame for you? Russian YouTubers AcademeG have your back, as they took a V8 example and added tank tracks where the wheels would usually go. The end result is something you should park on top of a lesser vehicle—just because you can.

[For those of us who don't know Russian, there are English subtitles to enable on their test video.]

The Bentley body was dropped onto a frame which includes two big tank-style tracks. While the original doors had to come off because they wouldn't clear the tracks, the interior is as luxurious as you'd expect. Eventually, AcademeG's host says they may look into a custom door that matches the car better but could open upwards like a Lambo door, but for this test drive, they've left the door space open.

They're still having some issues with the engine and the tracks working together, as the tracks work best with the engine's low RPM range. The tracks initially weren't on tight enough and fell off, and the project also doesn't have brakes yet. Its only working pedal is the gas pedal, which the host uses to keep the Ultratank's RPM down to usable speeds.

The steering wheel works fairly normally, though, directing the car's power in conjunction with an open differential. When the wheel turns, that open diff sends the car's power to the outer set of tracks, and the inside set is brought to a halt. This turns the whole vehicle just as a tank would, only using normal car-style inputs.

Best of all, the V8 was left unmuffled. This tank-car has the riotous roar the big Bentley always deserved to have. Remember, folks: loud pipes may or may not save lives, but they do at least alert anyone nearby that someone's about to send it.

AcademeG has a full playlist on YouTube of their adventures with this particular Continental GT, including their build process of the Ultratank. They'll no doubt be adding to this playlist in the future, as this test drive only saw speeds around 50 kilometers per hour (31 miles pere hour), and their goal is to make it do 100 kph (62 mph).

Honestly, this is the best possible use of a depreciated luxury car. You could plausibly daily drive a 62-mph Continental GT with tracks even in the harshest of Russian winters, provided they also work out the door situation.

Get a Load of the Unstoppable Tinger Track S500 Amphibious Vehicle

Ditch the ATV and figure out a way to get your hands on one of these puppies.