Watch a Turkey Survive Crashing Into Semi Truck at High Speed, Only to Escape and Get Hit by Other Car

It seemed that destiny had granted the large bird a second chance at life, but if so, that second chance lasted about three seconds. 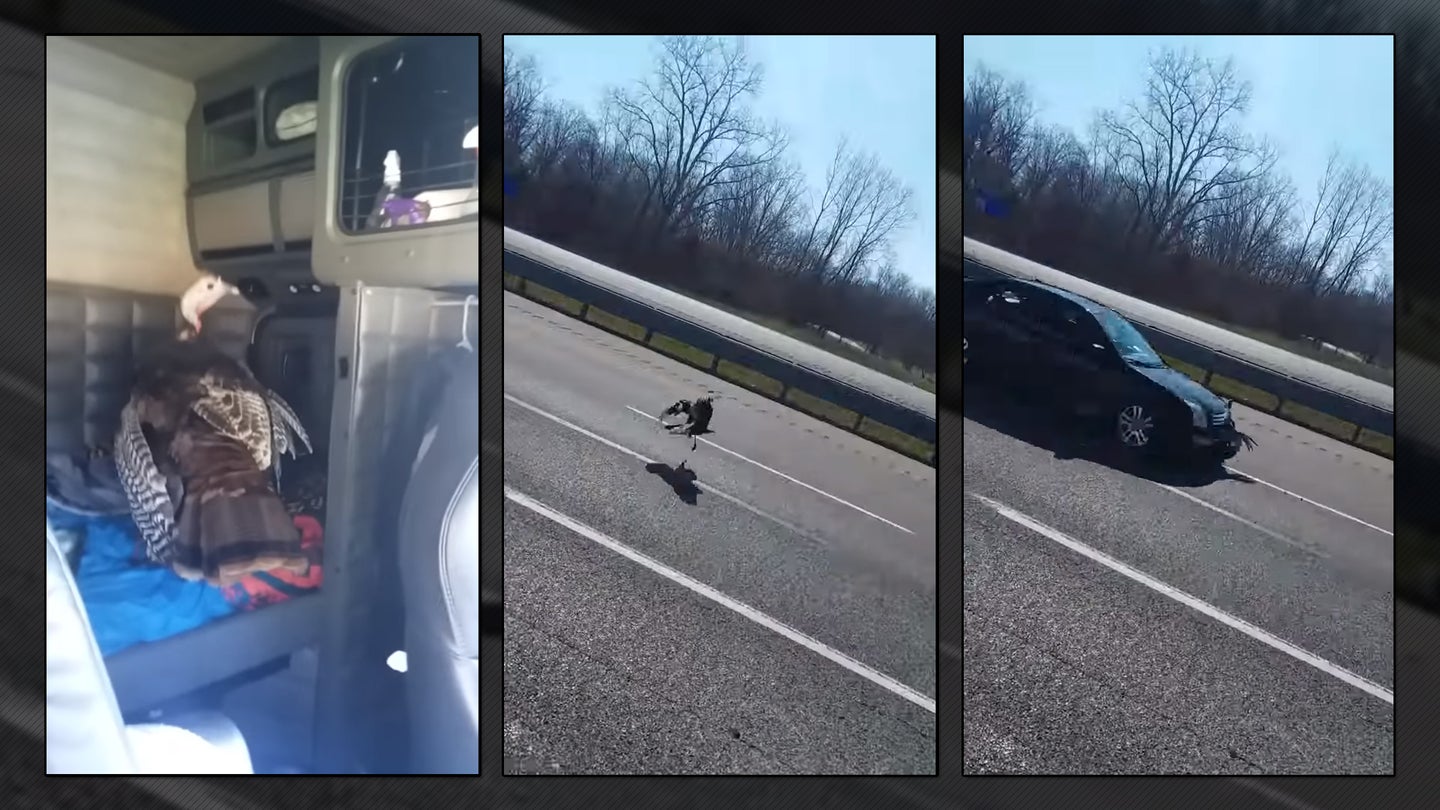 The driver of a semi truck recently found himself in a funky situation when a large turkey crashed through the windshield of his vehicle while traveling down the highway. Lucikly, no one was injured in the accident, but the turkey did make himself at home in the sleeper portion of the truck, forcing the driver to pull over and attempt to shoo him out. Well, let's just say that he succeeded at that, but the turkey not so much.

Kevin Bokelman, the trucker who uploaded this video showing the turkey in his semi, says that he made multiple attempts to shoo away the wild bird, but it wouldn't budge. The footage shows Bokelman shouting commands at the turkey, making noises and startling the bird in an attempt to have it leave through the passenger's side door. After a few seconds, he walks around to the driver's side of the truck and opens the sleeper cab's only door, which happens to be facing the interstate.

Finally, the bird decides to make its exit, immediately hopping into traffic like a terrible game of fowl-frogger. You can probably guess what happens next.

The turkey is immediately struck by another vehicle driving on the left-most lane, allowing for the tractor-trailer to have some space while parked on the side of the road. An audible thump from the collision can be heard, followed by a poof of feathers as the sedan continues down the highway.

An eight-second pause of disbelief by the cameraman follows the unfortunate turn of events. Eventually, Bokelman mustered up the words, "Well he didn't make it very far."

Lighthearted jokes aside, the trucker and the occupant of the Fusion are both very lucky that nothing worse happened in this scenario. A typical adult turkey can weigh between 20 and 25 pounds, meaning that it probably did some serious damage to the Fusion's bumper cover and under-car plastics. From a video still, it seems that the bird may have made contact with the grille and hood as well.

While I wouldn't drive with a feral bird in my back seat, I'm not sure that I would have taken the same steps and allowed the turkey to put others at risk.

How Many Turkeys Can a Modern Heavy-Duty Truck Haul? A Turk-Load

See how the Ford Super Duty, Chevrolet Silverado HD, and Ram Heavy Duty rank on this festive (and useless) challenge.