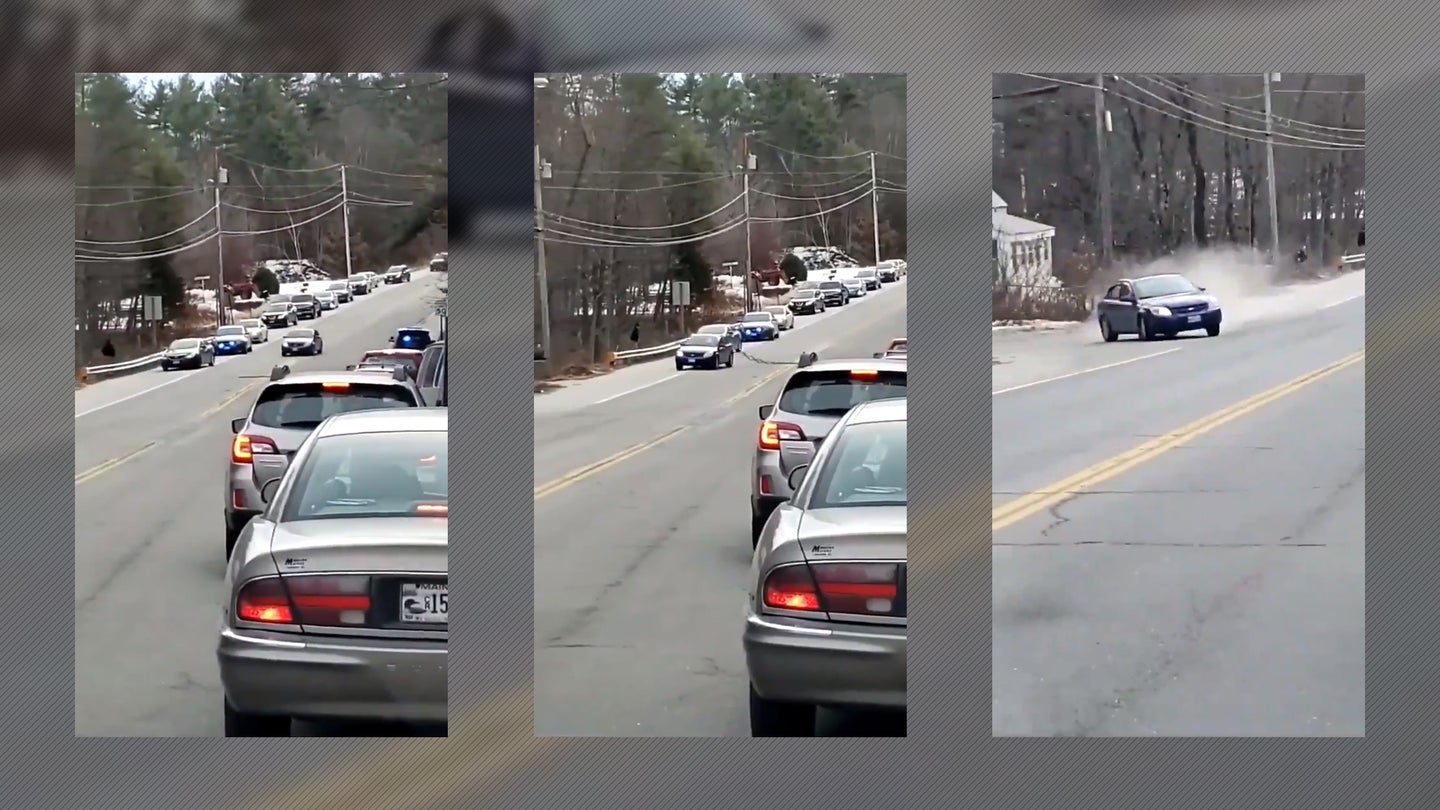 The dramatic conclusion to a police chase in Raymond, Maine was caught on camera, showing the exact moment a suspect's vehicle struck a spike strip and collided with two other cars that were ordered to stop along the side of the road.

According to news outlet the Press Herald, 29-year-old Dale Tucker was being sought by police over his involvement in a "domestic situation" earlier in the day when a police deputy attempted to perform a stop on his vehicle in a parking lot. Tucker sped off and officers began their pursuit in an attempt to stop the vehicle. After the chase escalated to high speeds, the officers stopped traffic on a densely populated road and set up spike strips to end the chase.

After Tucker made contact with the spike strips, he lost control of his Cobalt and struck two other vehicles, a 2000 Buick Park Avenue and a 2018 Chevrolet Silverado Z71, the latter of which was the camera car that filmed the entire ordeal.

Some news sources heavily criticized the way that the pursuit ended, suggesting that an attempt to stop the chase on the high-traffic road filled with cars was not likely the best choice. Police disagree, stating that Tucker colliding with the innocent bystanders was not due to the positioning of the cars and spike strips, but rather the driver of the disabled vehicle improperly over-correcting after he hit the tire deflation device.

“Usually, when spike mats are deployed, it is rapidly unfolding. We try to make it as safe as possible. If the suspect just drives over the strips, it is not a problem; if he tries to go around it or take other action, it becomes a problem.” said Lieutenant David Hall of the Cumberland County Sheriff's Office. “The spike strips [do not] cause someone to lose control of their vehicle; they deflate the tires very gradually so they can keep control over the vehicle. Him crashing was not caused by the spike strips, but was caused by him overcorrecting.”

According to police reports, four non-life-threatening injuries requiring hospitalization were reported, three of which were the occupants of the Buick who ranged in age from 60 to 91-years-old. The fourth injury, Tucker, was also brought to the hospital where he was to be treated and subsequently transported to jail on charges which included Aggravated Driving to Endanger, Aggravated Eluding a Law Enforcement Officer, Criminal Speed, Failure to Maintain Control of Vehicle, and several other traffic-related offenses.

The driver is suspected to have been under the influence, which would explain how anyone could do this to a car in the first place.