Despite the collapsible roof, Bentley's new GT Convertible is as quiet inside as the previous-gen coupe. 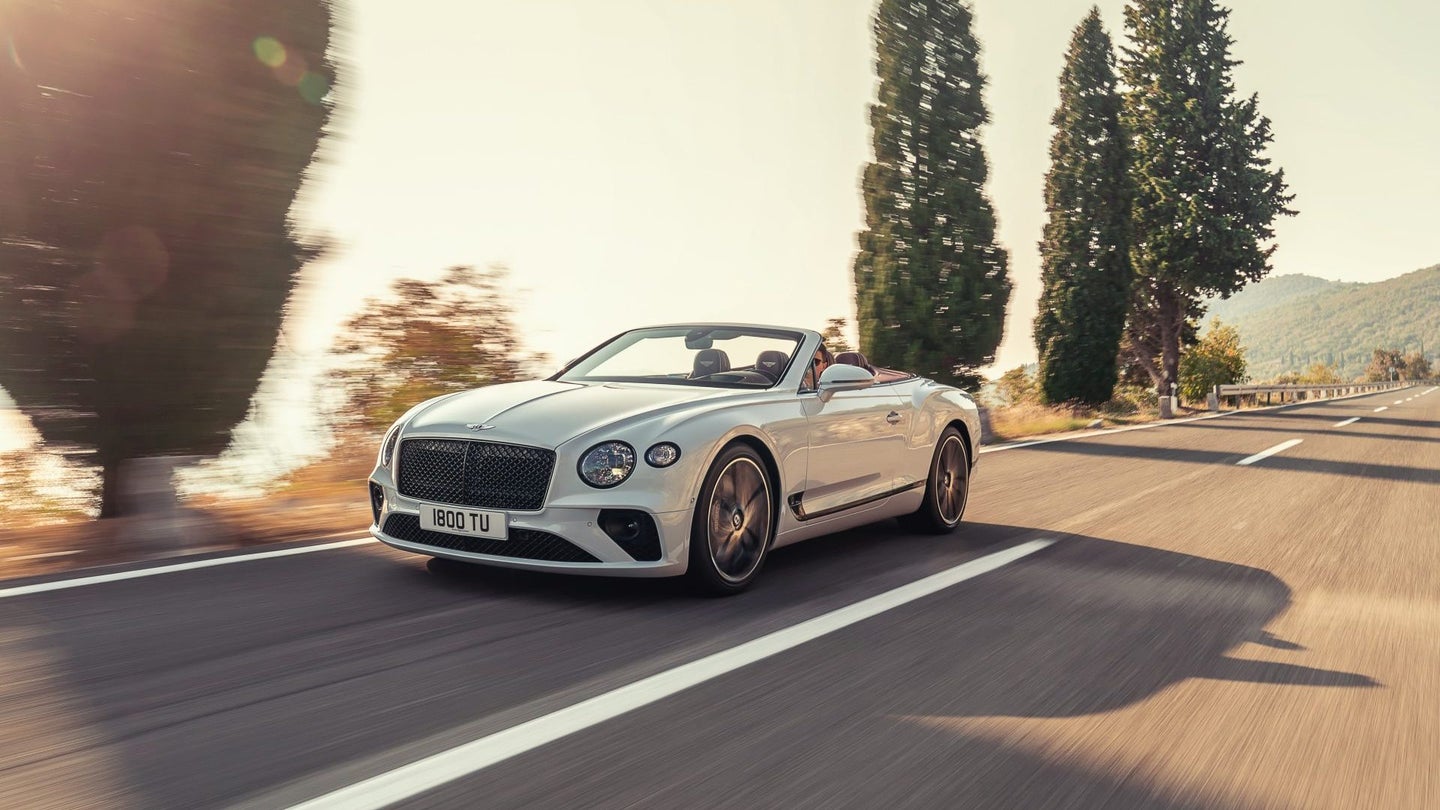 Topline: Bentley revealed the folding-roof variant of its new Continental GT on Monday, which features a nearly comical breadth of options, but a drop-dead gorgeous silhouette.

What's New: The defining feature of any convertible is its roof, and Bentley hasn't fudged around with the Continental GT's foldaway "Z" roof. It'll collapse itself in 19 seconds at speeds up to 30 miles per hour, and it's three decibels quieter than the last convertible Continental—so just as quiet as the last-gen coupe, to be specific. Said roof can be had with one of eight liner colors, and seven external colors, one of which is tweed. It seems Volkswagen is still taking Bentley's British heritage to a borderline pantomime extreme.

Many convertibles suffer lost chassis rigidity with their load-bearing roofs hacked off, but not the Continental. Its chassis is five percent stiffer than that of its predecessor, but also 20 percent lighter. Wrapping the chassis is bodywork available in 17 paint colors (and 70 hues), and cradled within is a cabin that features over 107 square feet of wood, which can be had in eight veneer finishes, or four dual-veneer finishes.

Standard audio equipment is a 650-watt, 10-speaker system, but audiophiles can upgrade to a 1,500-watt, 16-speaker Bang & Olufsen system, and acute audiophiles can take things further with a 2,200-watt, 18-speaker Naim setup with eight audio modes and active bass transducers. It'll presumably be an option for people who know what those are.

While its audio blows your eardrums, the Continental's 6.0-liter W-12 and eight-speed dual-clutch transmission will do the same to your vestibular system. Its 626 horsepower and 664 pound-feet of torque can whip your neck back with a 3.7-second zero-to-60 time, and charge onward to a top speed of 207 mph. The GT is equally good at managing the mundanity of traffic, with cylinder deactivation turning the W-12 into a VR-6 while cruising, and stop-start killing idle, sometimes even while coasting. Combined port and direct injection will prevent intake valve coking.

Quotable: "Elegant understatement that forces you to look; engineering excellence you'll take for granted—the extraordinary breadth of capabilities offered by the new Continental GT Convertible is unique and can only be offered by our noble British brand," said Bentley CEO and chairman Adrian Hallmark.

What You Need to Know: As the CEO of rival ultra-luxury automaker Aston Martin stated Sunday, the rich are getting richer, and that means automakers are trying to cash in on the booming bourgeoisie. One convincing alternative to the Bentley Continental GT Convertible could be the BMW 8 Series convertible, which looks to be 80 percent the car at likely half the price. The $215,000 hardtop Continental impressed but also bothered The Drive's editor Mike Guy on a test drive, and the latter shouldn't be something one can say about a car that costs as much as real estate.