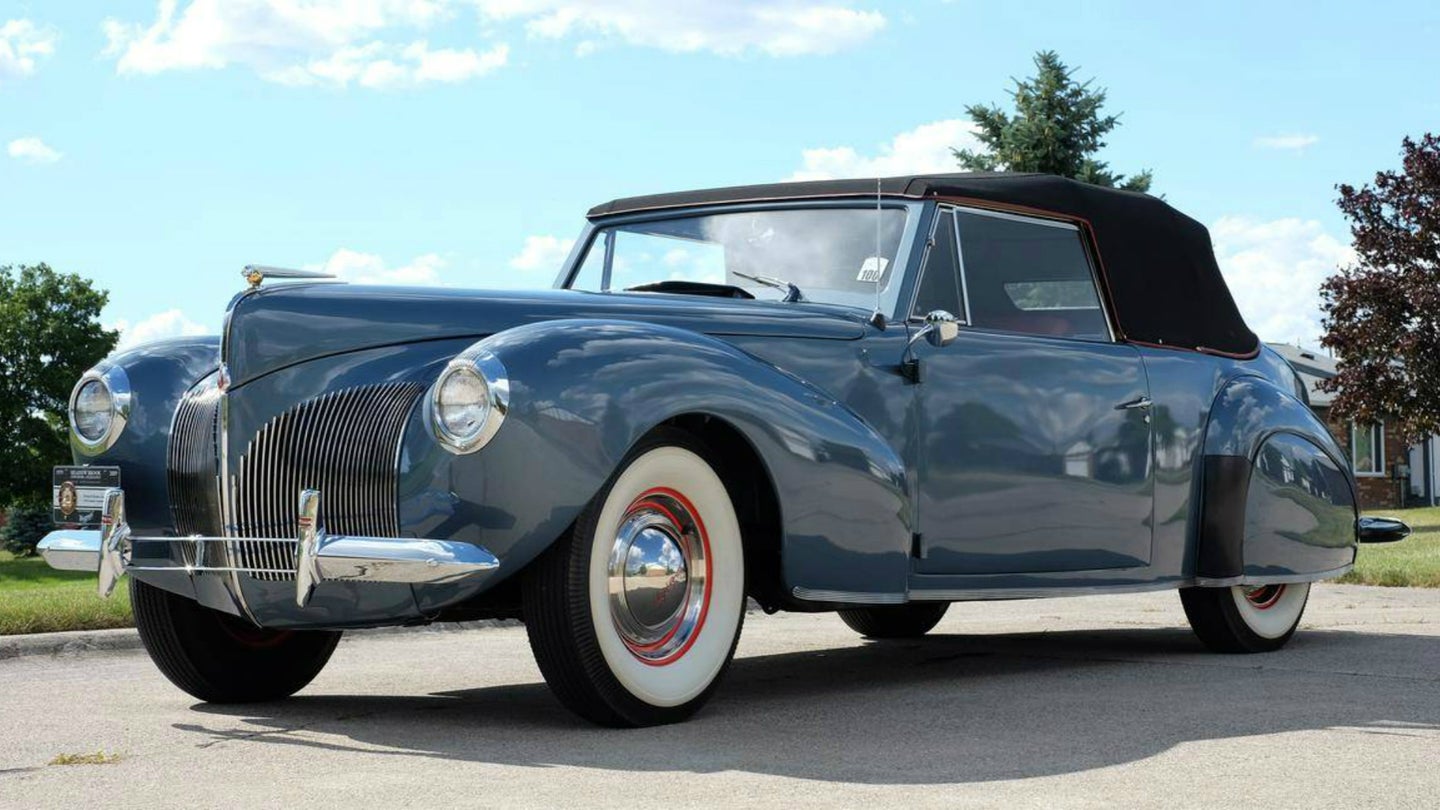 A stunning 1940 Lincoln Continental convertible is on offer for $100,000 in Bloomfield Hills, Michigan, from a private seller and is listed on Hemmings.

This rare and largely hand-built car is from the Continental's first generation, which ran from 1939 to 1948, with an interruption from 1942 to 1945 when American car production took a back seat to fighting Nazis.

The Continental was willed into being by Edsel Ford, Henry's son, and the second president of the eponymous Ford Motor Company. Edsel acquired the Lincoln brand in 1922 with big plans in mind. "Father made the most popular car in the world," Edsel is reported to have said, "and I would like to make the best car in the world."

After taking an inspiring trip to Europe in the '30s, the younger Ford worked with designer E.T. Gregorie to create a sleek Lincoln prototype for his personal use. The car featured a spare tire mounted behind the trunk, a styling element he admired on cars in the Old Continent. Edsel garnered so much attention driving his handmade one-off that he commissioned the car to be built as Lincoln's flagship starting in the 1940 model year, naming it the Continental after the land that inspired it.

When the Continental first came out, famed architect Frank Lloyd Wright called it "the most beautiful car of all time." He was an avid automotive collector and—trivia time—invented the carport, so who'd argue with him?

The Continental competed with the Cadillac Series 62 which helped usher in a style trend in 1948 when famed GM designer Harley Earl decided to mount their taillights on small fins. All of Detroit eventually caught tailfin fever as the designs grew increasingly flamboyant and aesthetically questionable through the late '50s.

Where the Continental trumped the Series 62 was in cylinder count. It served up a compact V12 in place of the Caddy's big V8. By the end of the Continental's run, in 1948, Lincoln's 292-cubic-inch mill produced 125 horsepower, which was adequate for the time. It was a smooth, if not entirely reliable, powerplant.

The 1948 Lincolns are the last mainstream American cars fitted with V12s.

The Michigan car is finished in a medium blue with red leather seats and a black top. The seller states it was "fully restored to original factory order for over seven years" and photos seem to bear this out. Grand V12 convertibles such as the first generation Continental have a presence few modern cars can match. The current 10th generation Lincoln Continental is stately and handsome, but it's nearly dwarfed by its 18-foot-long forebear.

Do you have 100 large and a big garage that needs classing up? If so, check out this option and send us photos once you've signed your name to the title—we'd love to see it then, even if we can't take it home ourselves.

Most of the American luxury brand’s sales growth in recent years has come from its standalone stores.