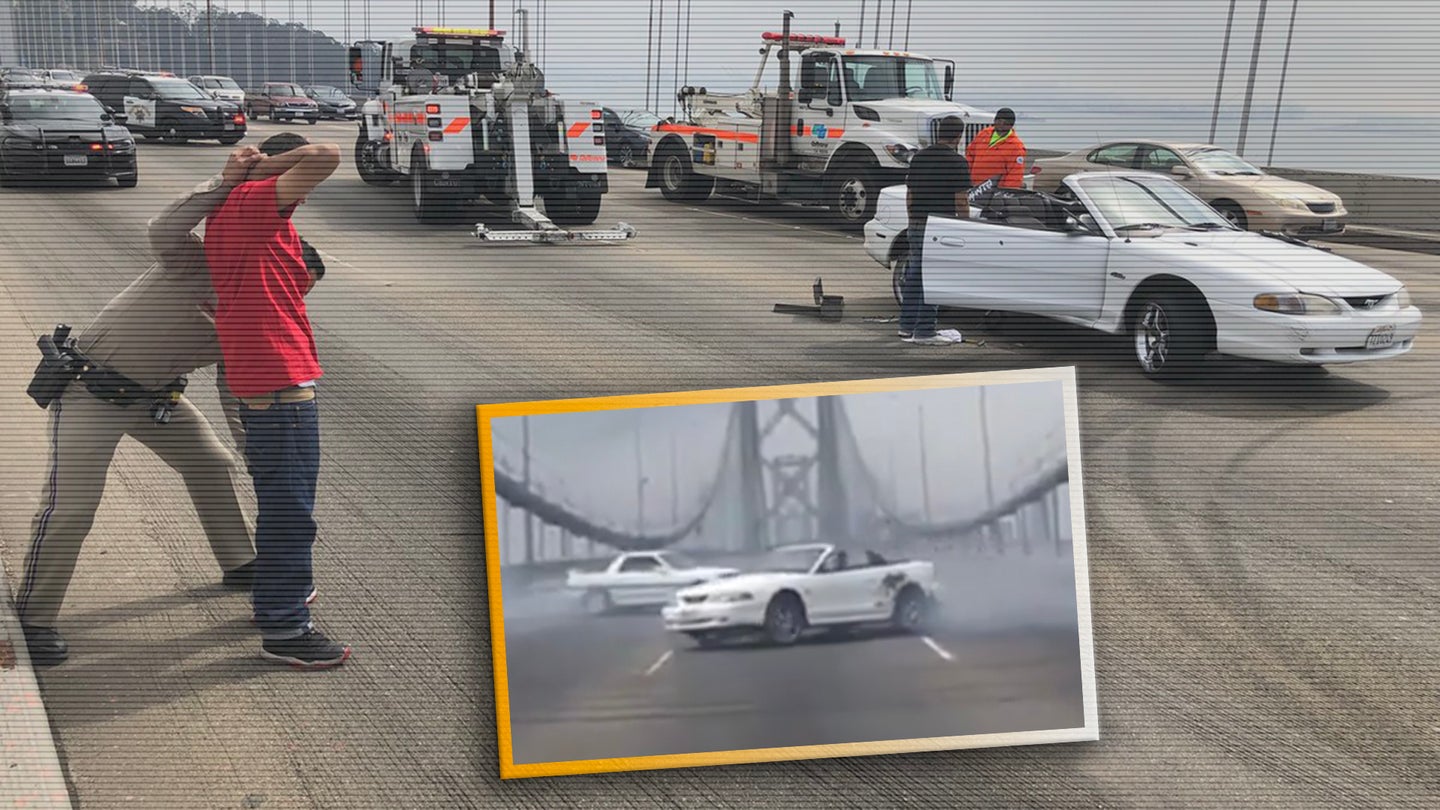 In what's become a surprisingly regular occurrence in the tech capital of America, a small crew of wannabe pro drifters in a couple of Ford Mustangs blocked traffic on San Francisco's vital Bay Bridge and staged an illegal, smoke-filled sideshow on Sunday—much to the delight of absolutely no one stuck in the growing jam behind them. That is, until the cops showed up and arrested one of the participants who was unable to flee after his Mustang lost a wheel while drifting.

According to the California Highway Patrol, authorities received multiple 911 calls from area freeways on Sunday morning as the renegade crew made their way toward San Francisco. Around 10:45am, the group reached the Bay Bridge and managed to halt traffic on the upper deck halfway across the span so the drivers of two older Ford Mustangs and a late-80's Toyota Supra could showcase their sick skills.

Video from a witness shows the three pirouetting across the empty roadway as people in the front row of stopped cars—who presumably aided in blocking traffic—exit their vehicles and record the show. A chorus of horns can be heard bleating plaintively in the background as everyone is forced to wait for the madness to end.

Thankfully, it does. Another video shows the white convertible SN95 Mustang eventually lose one of its rear wheels just before police arrive to provide the grand finale, arresting the driver while his two friends and their accomplices flee the scene. We don't get to see the arrest take place, but this perfectly-framed picture provided by the CHP more than makes up for that. The driver getting booked, the Mustang still stopped in its tire tracks, the tow truck operators figuring out how to haul the hunk of junk out of the way...frame this and put it in the SFMOMA.

Police posted on Facebook that the driver was charged with reckless driving and exhibition of speed, while his noble steed has been impounded for a month. The other two drivers are still at large. Authorities also stopped several other vehicles for illegal modifications as the traffic flow resumed on the bridge.