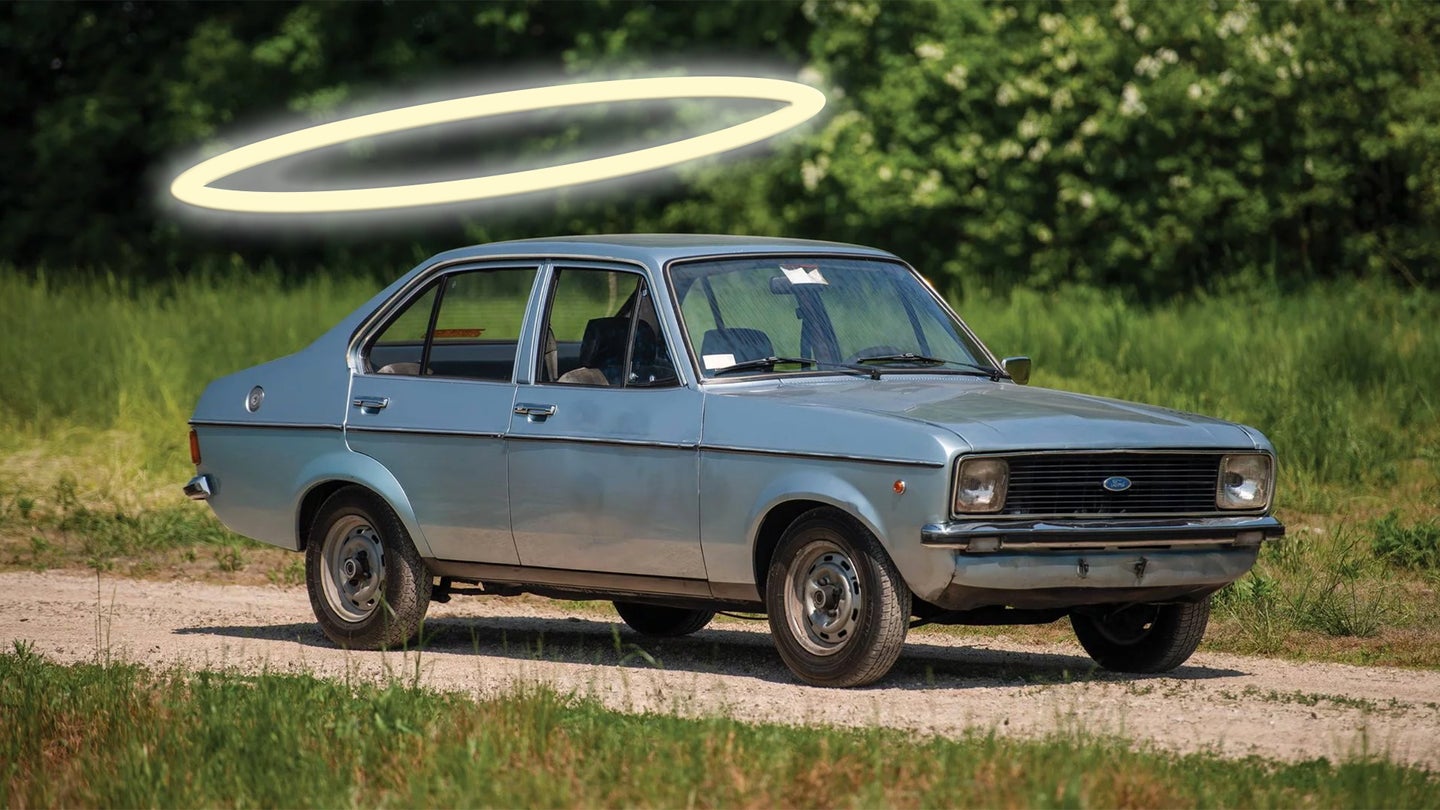 It's not every day that a dumpy 1976 Ford Escort GL crosses the dais at one of the world's finest auction houses. But then again, it's not every day that such a car was once owned by a literal saint, and RM Sotheby's expects Pope John Paul II's former Ford could sell for up to $300,000 when the hammer falls later this summer.

As the second-longest-serving pope in the modern era from 1978 until his death in 2005, Pope John Paul II was one of the most iconic figures of the late 20th century. His influence helped bring down apartheid in South Africa and communism in Eastern Europe, and his extensive travels made him a global presence outside the Catholic Church. In 2014, he was officially canonized and made a saint by Pope Francis.

Before all that, though, Karol Józef Wojtyła was just another cardinal in the Vatican, and thus without a popemobile to get around. So he bought the most honest and basic little box he could find: a base-model 1976 Ford Escort GL with a 1.1-liter inline-four engine. No air conditioning, no radio—just Cardinal Wojtyła, his heavenly thoughts, and a four-speed manual. It looks well loved, with a bumper full of dings and a well-worn driver's seat.

Wojtyła was forced to part ways with the car when he became Pope John Paul II two years later. In 1981, he was nearly assassinated when a gunman shot him while he was riding in an open-topped Fiat Campagnola, leading to a succession of enclosed popemobiles that carried him around the world throughout the rest of his life.

But evidently, he still thought about simpler times. The Ford remained parked at the Vatican for decades until it was sold at a charity auction in 1995 for $102,000, and buyer Jim Rich told the Associated Press that he promised Pope John Paul II that he'd take good care of the old Mark II Escort. It was later sold at auction for almost $700,000 when the pope passed away in 2005.

That same story details new owner John O'Quinn's plans to house the holy Escort in an as-yet-unbuilt car museum, the plans for which stalled back in 2010 after O'Quinn died in a wreck amid mounting legal troubles related to his work as a personal injury attorney. With no children, his substantial estate that included over 1,200 classic cars has ended up in a back-and-forth between the executor of his will and the head of his personal foundation—and meanwhile, over 850 vehicles have been sold off.

And so it appears that the number for the Pope's old Ford Escort has finally come up. Chances are it won't get anywhere near that $700,000 mark, which came in the peak of the usual postmortem collector frenzy. But chances are it will sell in the expected range of $150,000 to $300,000 when it hits the auction block at RM Sotheby's Auburn Fall event at the end of August, likely making it the most expensive stock Escort in the world.