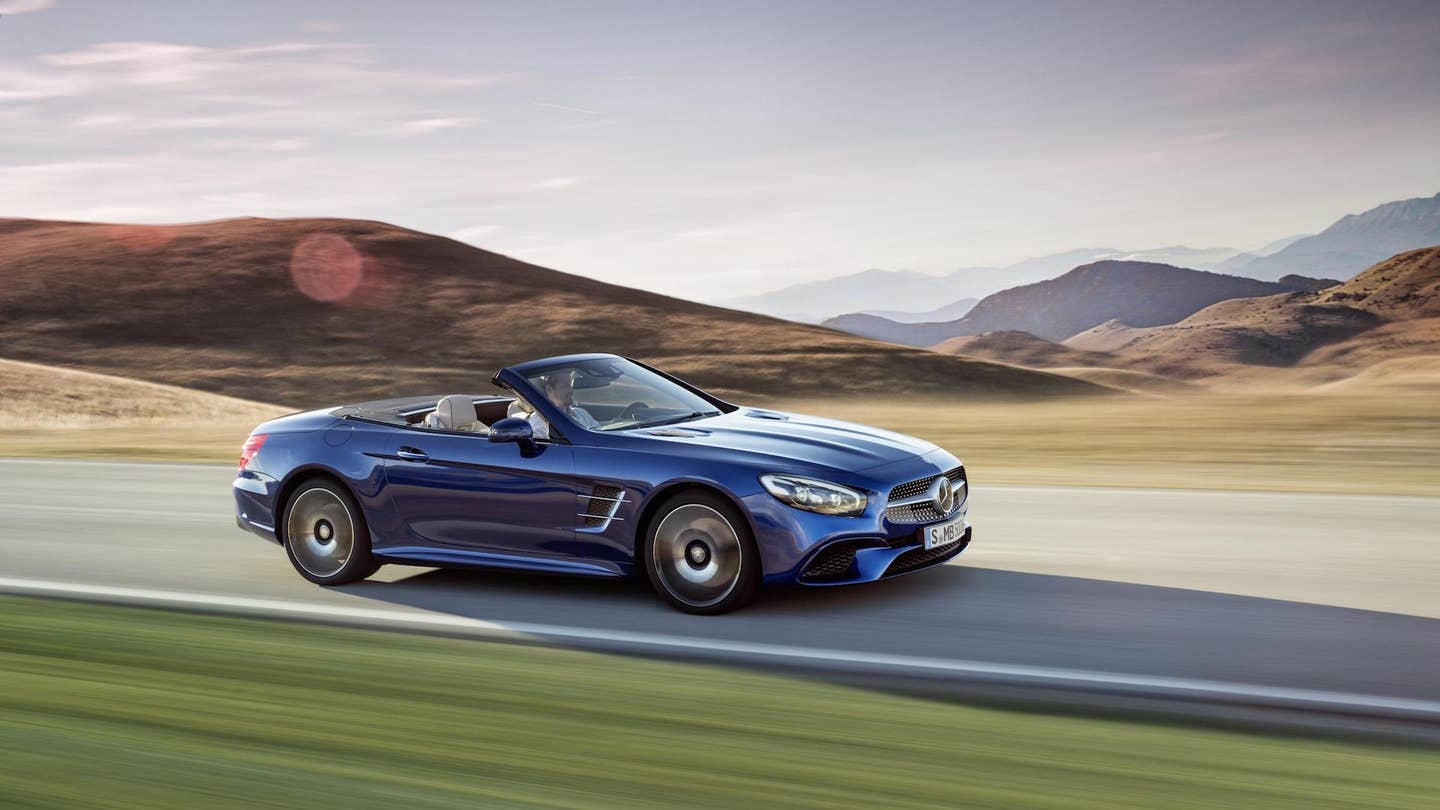 The Mercedes-Benz SL roadster is one of the longest running nameplates in the automotive world, tracing its existence back in one continuous and (mostly) elegant genealogical root-thread to the mid-Fifties. Yet, when one looks at the brand’s almost metastatic contemporary model proliferation, it becomes increasingly difficult to figure out exactly how and where the SL plays.

The logic of the sedan and SUV lineups is transparent. Sizes XS, S, M, and L as represented by the A, C, E, and S-Classes, respectively. But the advent of the new AMG GT coupe, a pure two-seat sports car hardtop, and the new S-Class Cabriolet, a pure luxury grand tourer convertible, has seemingly given the SL a squeeze from its own maker. This marketplace problem has been enhanced by the release of new competitors, like the Jaguar F-type, and the SL’s price creep up alongside downmarket movement by boutique players like Aston Martin’s Vantage.

These issues are further compounded by the relative un-loveliness of the current SL, contrasting Benz’s otherwise stellar exteriors and interiors. Sales reflect all of this. Purchases of the brand’s flagship roadster were down 30 percent in the U.S. from 2013 to 2014; this year, they’re down a further 17 percent. So far.

Like a fading Teutonic action hero (Expendables 3… Why, Arnold? Why?) the SL is still a solid and muscular draw. But it’s starting to sag. Time to call in the plastic surgeons, and the script doctors, and maybe the CGI magicians, and re-launch the franchise.

Just unveiled at the Los Angeles Auto Show, the refreshed 2017 SL is more than a headlight and taillight revision

“I took the initiative to make this almost a new SL because we redid major parts of the car,” says Gorden Wagener, head of design for Mercedes-Benz. “We really modified the proportions, so the car is two inches lower at the front which is really quite something in sports cars. Very thin, slim lights. And most importantly we reversed the grille, and that is inspired by the 1952 SL Mercedes Panamericana, which is a key design that again goes back to the pre-war Silver Arrows. It brings it more into the league of exotic supercars.”

Exotic supercars may be an overstatement. The design is certainly more cohesive—it could hardly have been less—and a step in the right direction, especially in this lofty category. But we still wonder if this will suffice to make the SL relevant, as all segments of consumers seek more comfort, practicality, and functionality.

“I think the SL is a car, similar to S-Class, that embodies the brand at its most, at its best,” Wagener says. “It has such a long tradition. And it’s an icon. It’s kind of different from, let’s say, the 911 at Porsche, which is not as long in heritage as the SL, but has never changed. The SL very much mirrors the decade it’s in. The Fifties SL is more in line with the beauty icon of that time. The Sixties pagoda was lighter, more in line with its time. Actually, it’s very similar to the Corvette. The Corvette made similar changes to its era. So, yeah, this brings this car into pretty much the next decade.”

That last bit is a literal statement. It seems unlikely that the brand will give up a model that has such history and relevance. But if the SL is to be revised for a seventh generation, it will not be released until model year 2020, the year by which Benz and other automakers are promising fully autonomous vehicles.

Will the next SL drive itself off showroom floors? That’s a figurative question as well as a literal one.