Worried about the death of fun cars? At least Honda hasn't screwed that up yet. 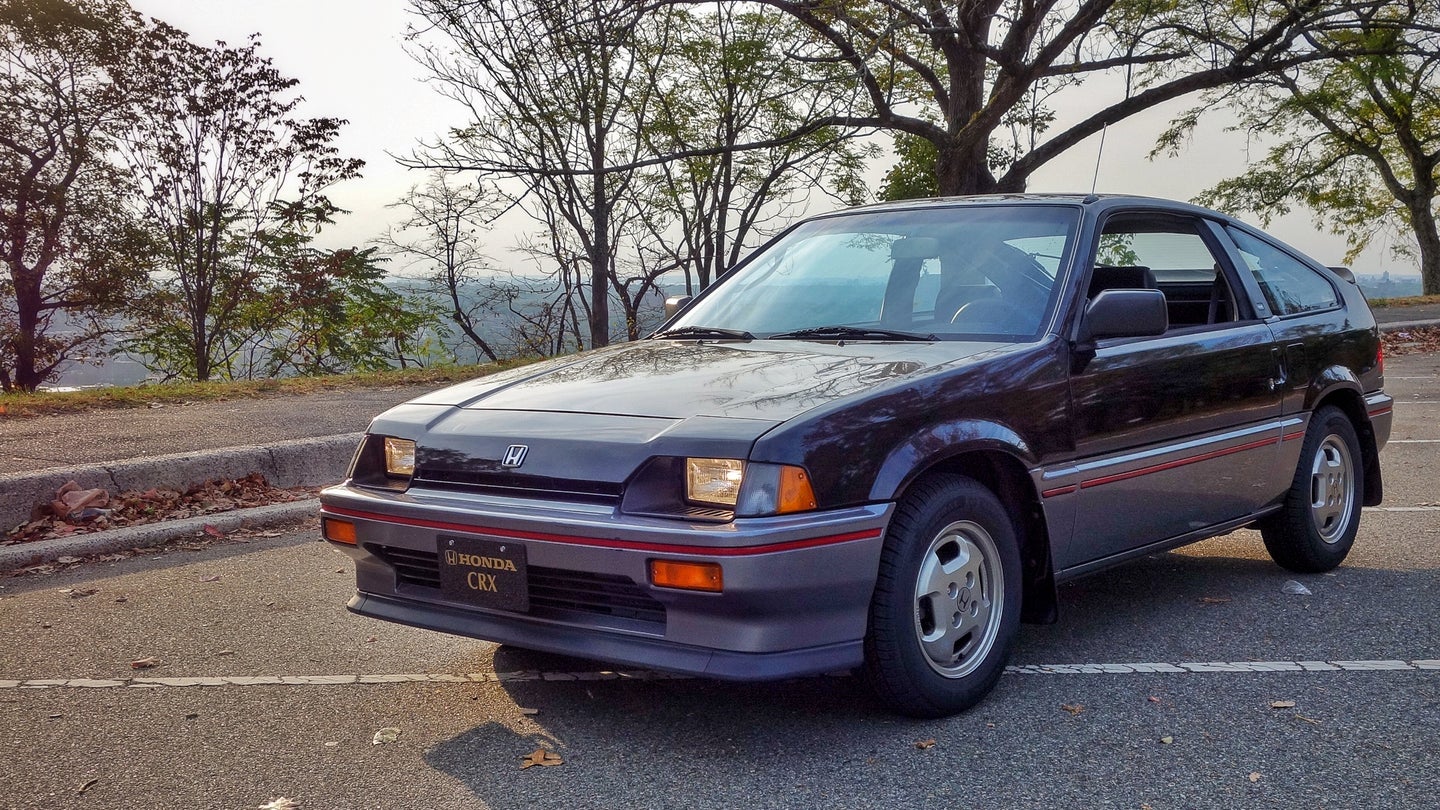 Every day brings us news of a new crossover, another axed manual transmission, the latest downsized engine or some advancement in autonomous technology. It's easy to worry that the future of cars will only mean transportation appliances instead of things that are actually fun to drive, let alone meant to be driven by humans instead of an algorithm.

But when you really look at the actual march of technology in cars, you start to see that it's generally made things better; faster, cleaner, safer, more efficient, and built better than at any point in history. And while cars are more electrified and high-tech, we still have more and better performance options than we've ever had.

Things are changing, but we—automakers, the car-buying public, the tuner scene, car culture writ large, all of it—haven't completely screwed this up yet. I had to go back in time to really understand this. A long weekend in a pristine 1985 Honda CRX Si—the very definition of "they don't make 'em like they used to"—taught me that if we haven't lost fun cars 35 years on from this CRX, there's a very strong chance we could have many more decades of driving thrills ahead of us.

It also taught me that the CRX Si deserves every ounce of its iconic status when you drive it today.

More than any vintage muscle car, the CRX feels like something that could just never happen today. It’s a two-door hatchback with only two seats. And yet it was a wildly successful and popular car in its time, with both mainstream buyers and enthusiasts.

Can you even imagine a car like that being a hit today, when everyone in America seems to have decided they need three rows of seats, eight inches of ground clearance and enough torque to tow a school bus out of a ditch? Nobody buys cars even close to this size anymore. Honda had to kill the Fit over slow sales. The modern Civic Si coupe got the ax, too. Hell, even Volkswagen has opted not to sell the ubiquitous Golf in America, except in hotter GTI and R forms. We're living in a different era for sure.

But in its time, the CRX (or CR-X in some markets) was a big deal for a small car. Launched in 1983 as a variation on the perpetually popular Civic, it came in fuel-sipping FE and DX models but added fuel injection and some badly needed extra power in 1985 with the Si model. The “sport injection” SOHC 1.5-liter model for the American market—where the FE module is prominently highlighted in the engine bay, and given its own proper name—added more than 30 horses over the base CRX. (Read Ate Up With Motor for a much deeper dive into the model's history.) It is the O.G. Honda hot hatch; though VTEC would come later, it set the template for what was to be down the line.

A second-generation CRX debuted in 1988, which kept the tidy kammback looks and had its own Si version dialed all the way up to 105 HP. Japanese and European versions of both cars had more powerful DOHC engines, often coveted by tuners. The CRX later mutated into the not-as-popular Del Sol in 1992, a decision I never quite understood, and the less said about the hybrid CR-Z of the 2000s, the better.

But the original Si was a hit right off the bat, especially with club racers, autocrossers and, eventually, tuners. That’s why it’s so rare to find one as clean as this example today—most CRX Si examples had cheap racing bucket seats, fart-pipe exhausts and underbody neon by the turn of the century. And a lot of rust, too, depending on where they lived. (By the way, this car got a ton of attention when I had it. I frequently heard "I used to own one of those!" from passersby and drivers with their windows down, usually followed by, "And I never should've sold it!")

This particular example came from Honda’s private collection on the West Coast, and with just about 10,500 miles on the clock, it was a rare chance to experience what a 1980s car felt like when it was basically new. Save for some dings, scratches and stains on the seats and a bit of paint repair here and there, this car looks and drives like it’s in the first year of its lease. Cloth bucket seats, five-speed manual, cassette deck with manual equalizer sliders, rear drum brakes, power sunroof—it’s an affordable, efficient, fun economy car with some nice extras.

And it all ran and drove with mostly zero drama, too. Far better than any of the dumpster fire 1980s BMWs I have personally owned. I asked the press fleet guy if there was anything unusual I should know about it, something I always ask when driving an older car.

“Nah,” he said. “It’s a Honda.” And he was right. Honda has kept this thing in phenomenal shape and running condition.

Having said that, it’s 35 years old, so like my knees when I try to run more than three times a week, there were some “Is it like this now or was it like this always?” issues:

That was it. The rest was smooth sailing. Besides professional-grade upkeep, it’s a testament to the build quality, which was obviously and undeniably great here.

That's still readily apparent today, even when the interior is full-throttle '80s with its manual equalizer sliders and gray plastics everywhere. This car came out right when companies like Honda and Toyota were starting to eat Detroit’s lunch with gusto. Fit and finish is impeccable, interior noises are minimal and visibility is outstanding. 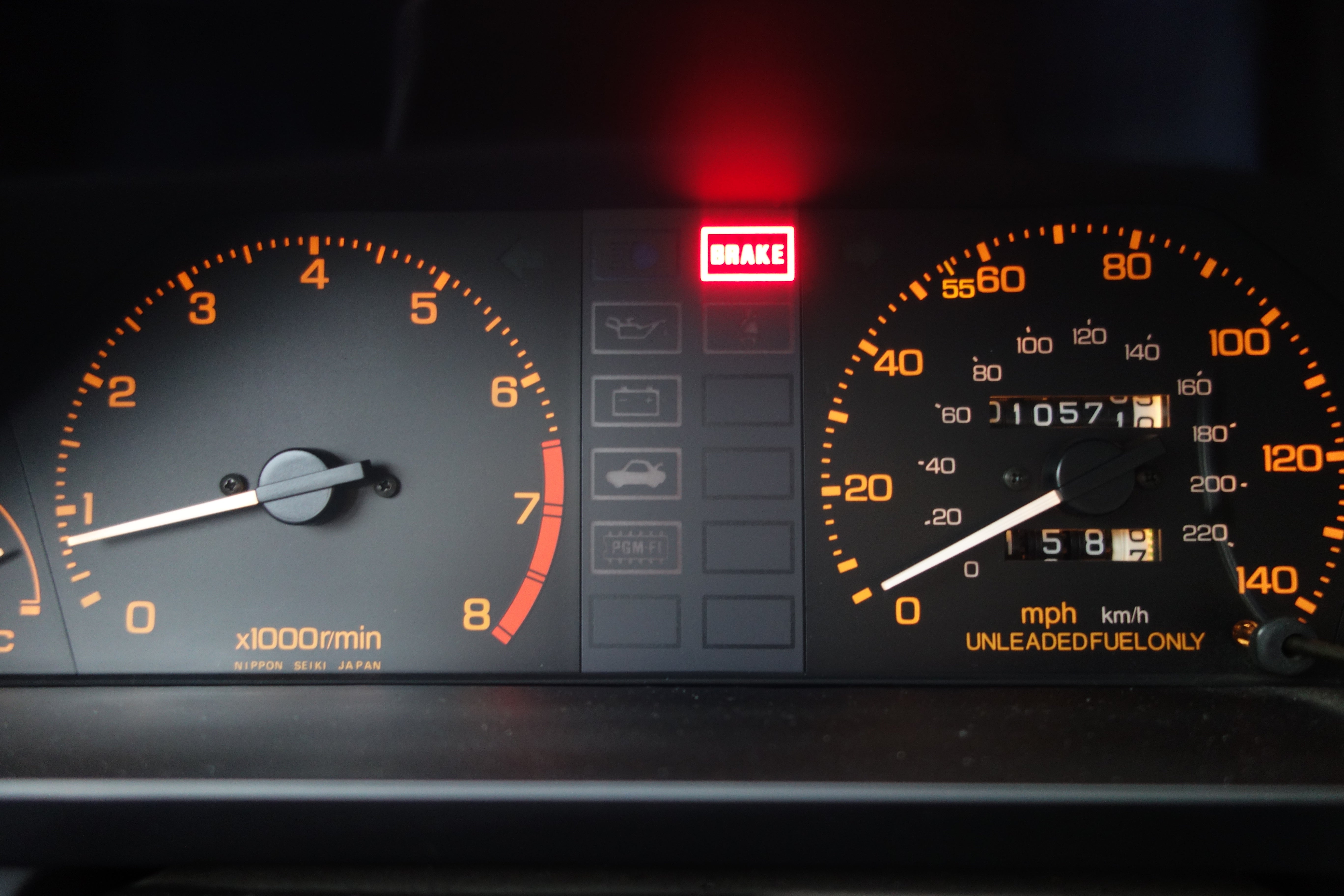 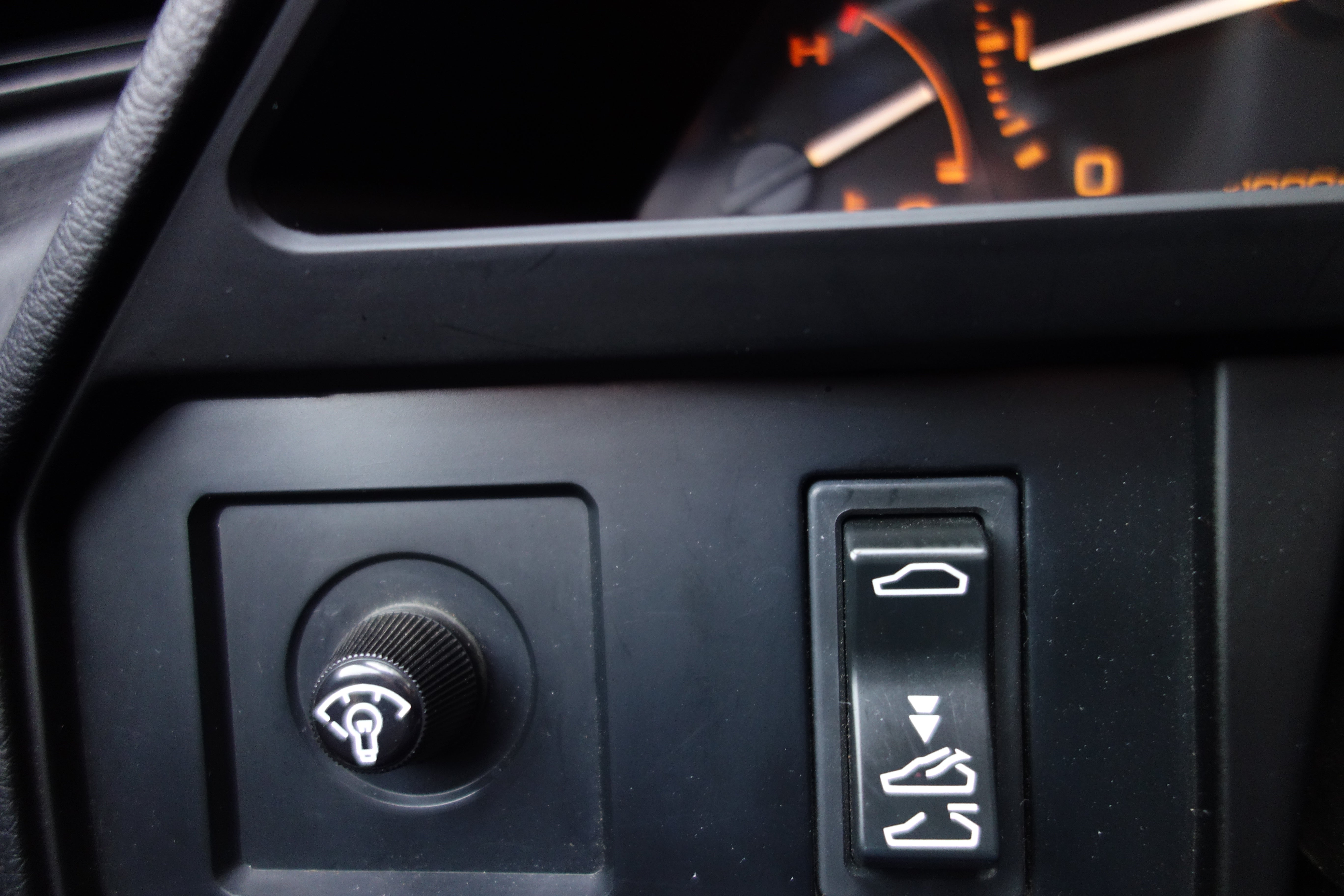 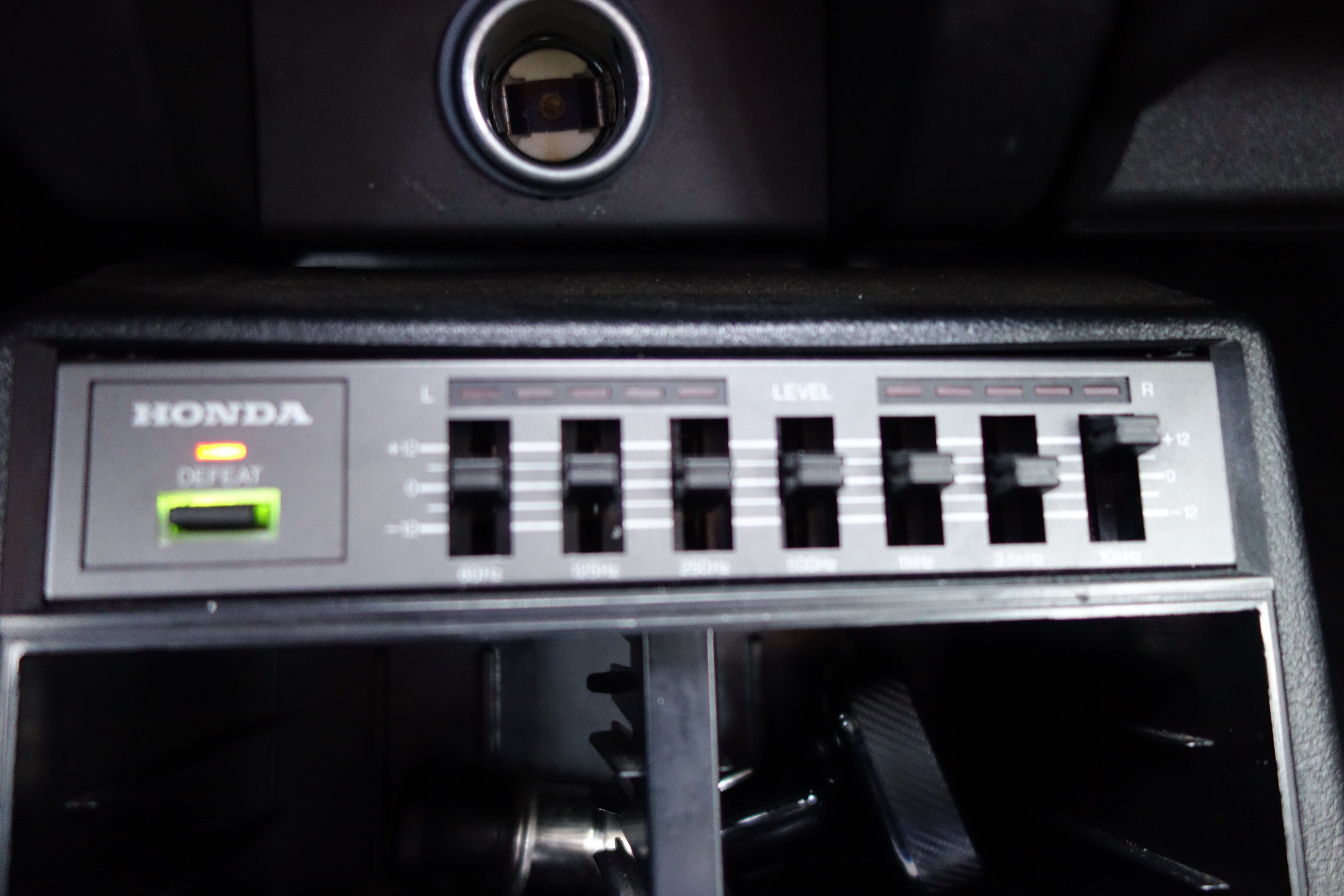 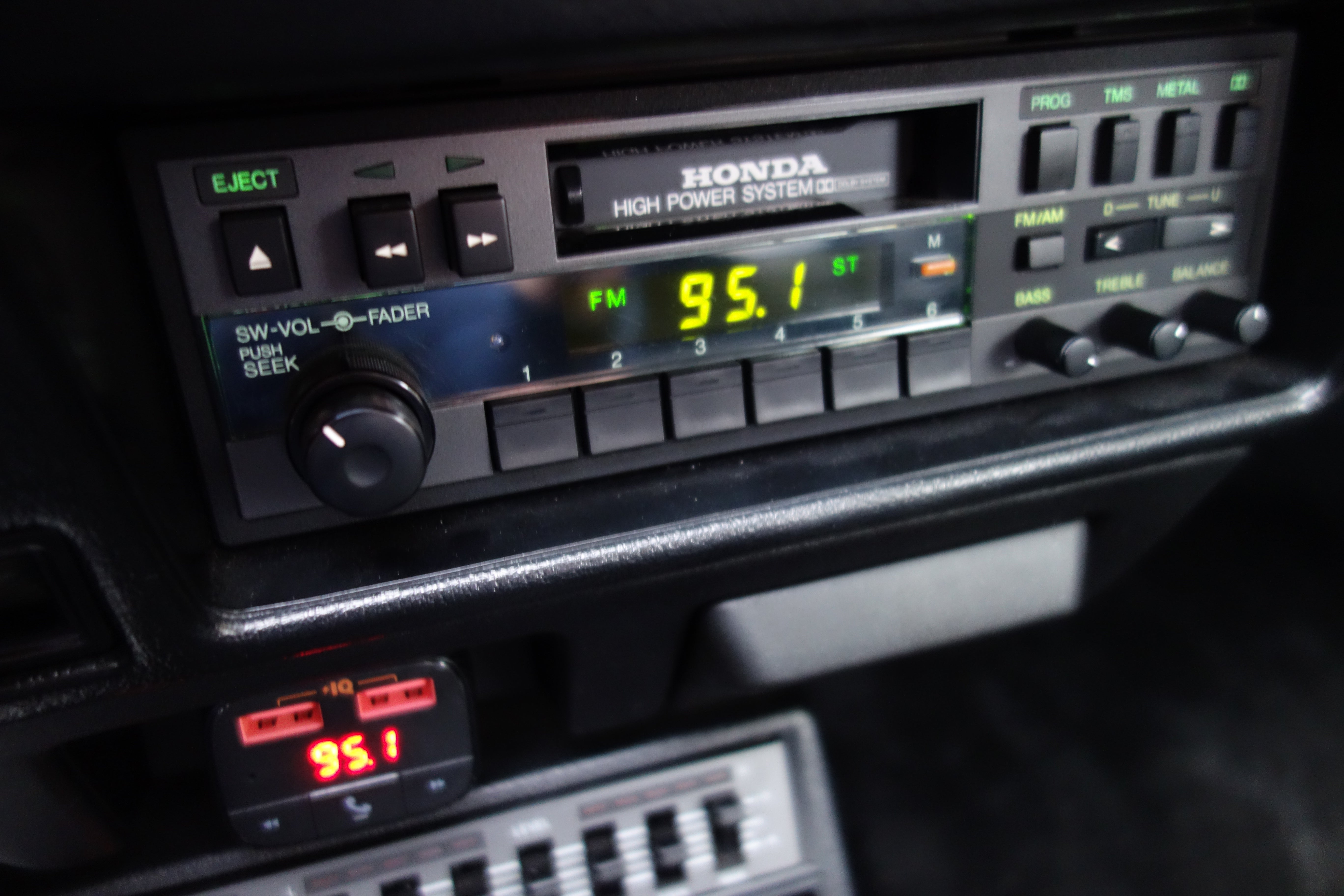 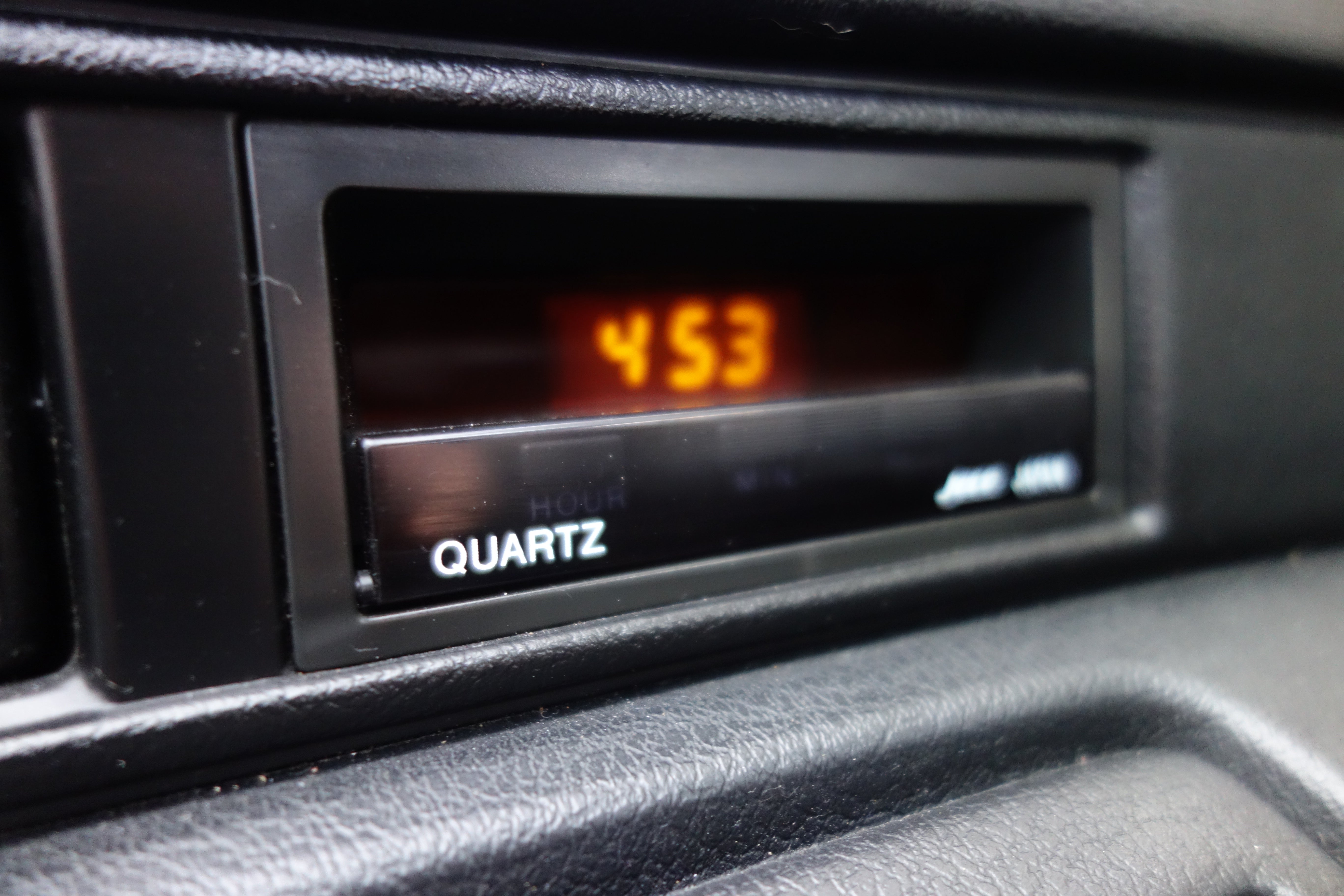 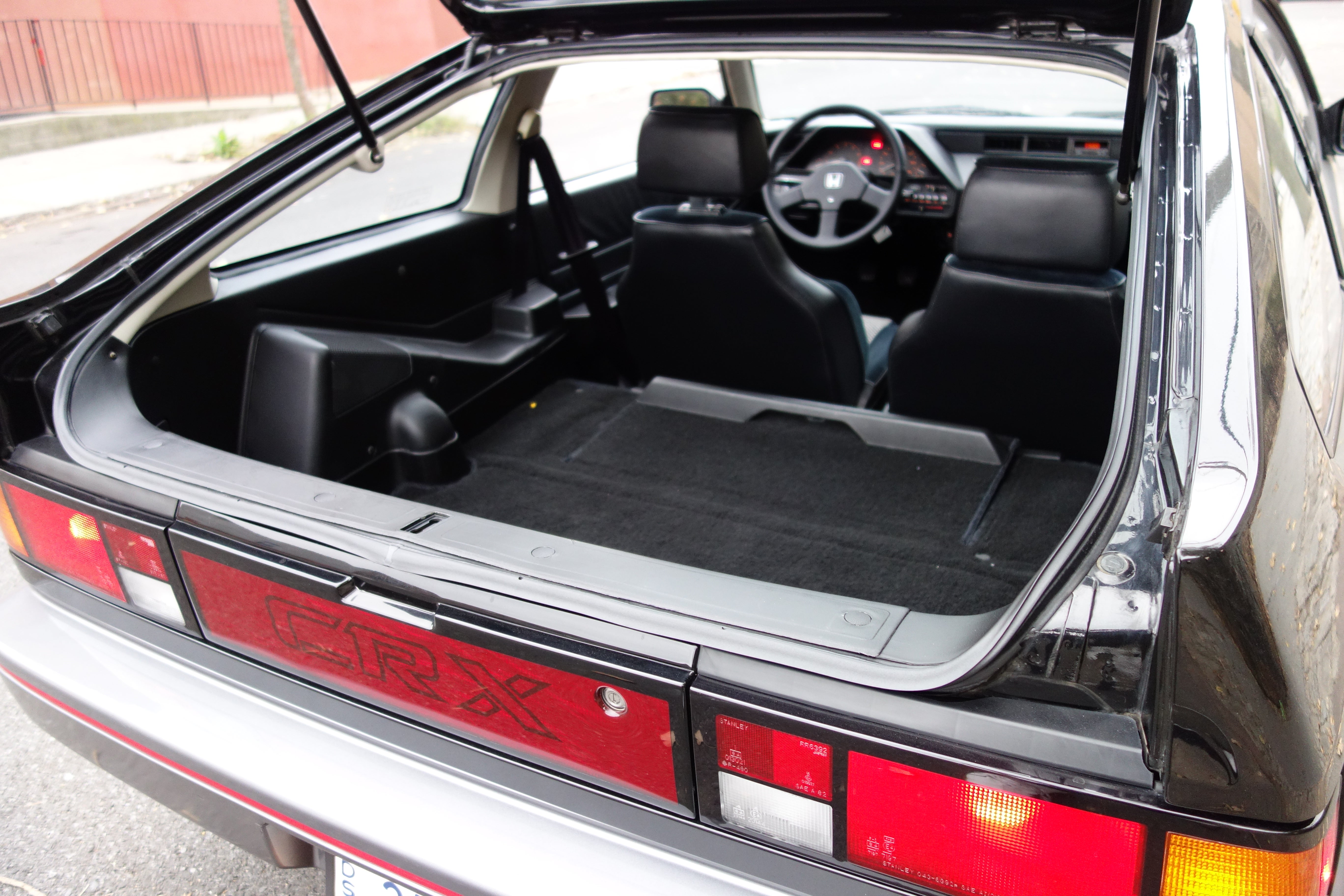 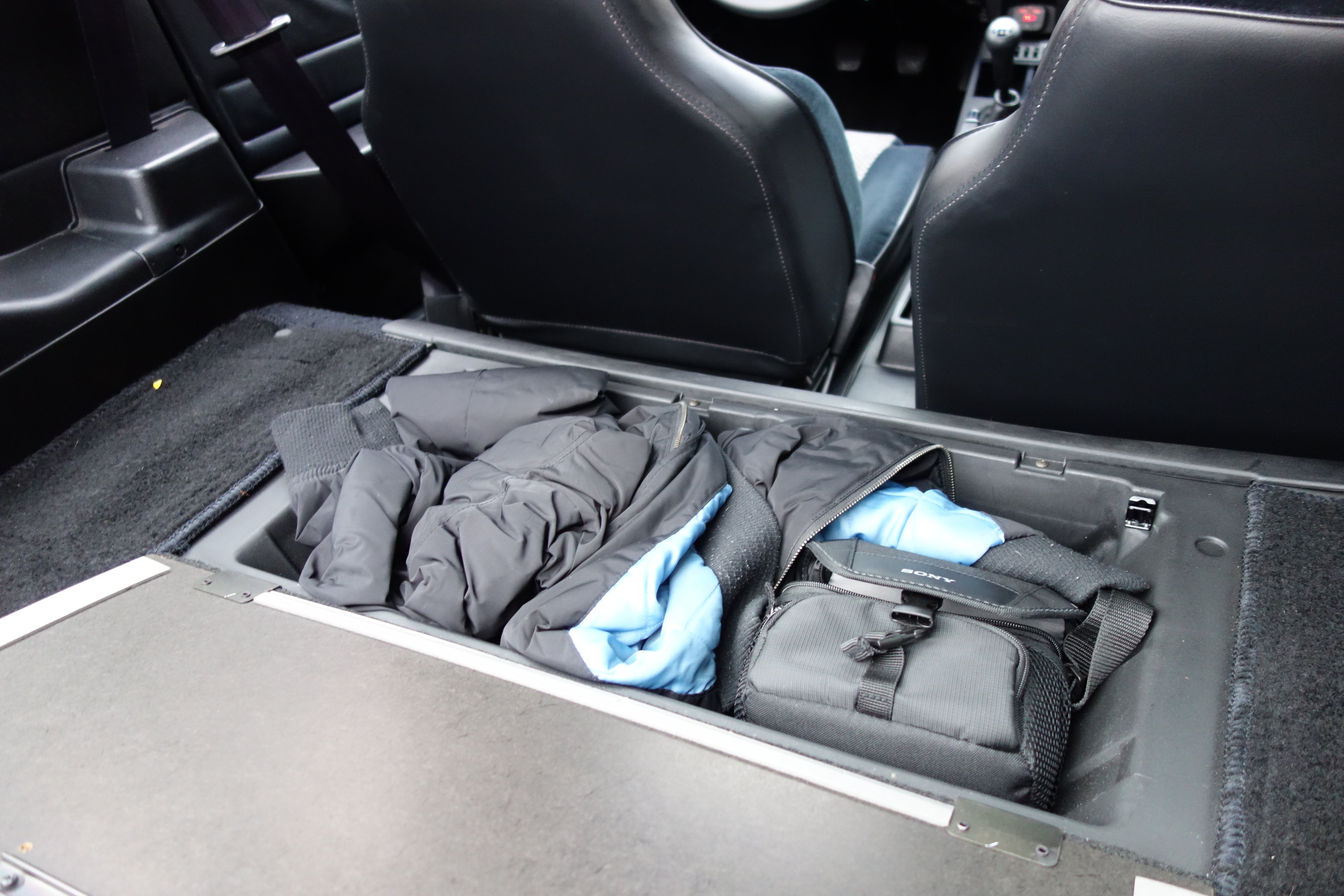 There's also more room inside than you might expect from its exterior size. Like a classic Mini, the CRX maximizes space within, with an extremely practical hatch area and even a hidden, lockable compartment built into the trunk floor.

Beyond that, it's fairly minimal as far as quirks go for a 35-year-old car. Analog gauges, AM/FM radio, stick shift—all very straightforward for any modern driver. The seats are remarkably comfortable and well-bolstered. The factory electric sliding sunroof even worked perfectly. Granted, the factory stereo is crappier than a cheap Bluetooth speaker is a today, but premium car audio systems on econo-boxes just weren't a thing back then. Not like they are today, at least.

It's exactly what you'd think it is: a well-made economy car with a few extra touches and flourishes for the sporting driver who wanted a little more than a standard Civic could offer back then.

So what's it like to drive a manual transmission, two-door, two-seat, front-drive compact that weighs 1,800 pounds with rear drum brakes and less than 100 HP in a world of twin-turbo V8 SUVs that all weigh as much as an apartment building? In a word: thrilling.

As such, motorcycle rules apply here. Driving it effectively means keeping a close eye on other cars (which is easy, since the thin pillars make visibility great), using its tiny size to your advantage, and wringing those 91 ponies out for all they're worth using the stellar five-speed.

While that power rating is underwhelming by any standard, it goes a long way when the rest of the car weighs so little. I never found the CRX Si to be slow; if you're willing to really beat on it, to squeeze it to the upper part of the rpm range every time, it can keep up with modern traffic just fine. More than a few third- or second-gear highway pulls surprised me. It's meant to be a fun car; to get the most out of it, you have to drive it in a fun way. And like any good Honda, that means living in the upper range of the powerband as much as you can.

I'm not sure I'd recommend the claimed 112 mph top speed, but I still found the car to be quite stable at higher speeds. The ride quality is certainly more brittle than any modern car, but never too upsetting for the sporty compact it’s trying to be. As for coming up against Suburbans and G-Wagens and 18-wheelers in something that small: I didn't find it scary, but I enjoy that sort of thing. I would not describe the experience as "chill" or "relaxing," however.

The five-speed manual is a joy to use. It's not quite as tight and short as the Hondas that would come later, but for a car with economy roots it's a fantastic partner for spirited driving—something that, unfortunately, we do see less and less of each year.

If you've ever driven the aforementioned classic Mini or an NA Mazda Miata, imagine the two having an illegitimate child together. That's how a CRX Si drives. You get super-compact dimensions, an '80s-basic interior, tight handling, a great gearbox and very little understeer to speak of. It revs high, parks tight, tackles corners like it's being paid overtime when the roads get twisty, and it sips gasoline.

Right now, in the year 2020, the new Honda I want to drive most is the Honda E. Electric power, charming looks, solid electric range for a city car, a 50:50 weight distribution and an adept chassis—on paper, it all seems great. But above all else, I'm curious about what it means for Honda's future. If this is the way the company is going, will their cars stay fun to drive, or are they doomed to become soulless transportation appliances?

It's perfectly understandable to worry about the future of enjoyable cars. Today's cars are, on the whole, faster, cleaner, safer, more efficient and more high-tech than at any point in history. They're also bigger, more expensive, utterly dominated by SUVs and trucks, and we can't expect every EV to have breakneck acceleration like a top-shelf Tesla.

But driving this near-perfect CRX Si today doesn't just reaffirm that car's legendary status in my mind. It also gives me some hope for the future. (The future of fun driving, at least—other stuff lately, not so much.) While it wasn't on the level of, say, a Porsche 928 in its time, the CRX Si was a fairly high-tech car in its day—certainly at this price tag. Electronic fuel injection unlocked a lot of performance for this little car, and tech like that helped the entire auto industry move past the malaise of the late '70s.

It's 2020, and at the very least, Honda hasn't made a mess of things yet. The current Civic Si is a first-rate machine, such a blast that we've declared it the best $26,000 car you can buy. The Civic Type R is far and away the greatest hot hatch currently in existence. Acura's getting back to the performance game, and the current NSX is stellar, even if it's proving to be just as misunderstood as the original was in its time.

Yes, all of those cars are bigger and heavier than the CRX was. Thank crash safety standards that have ensured car crashes kill fewer people than they did in 1985. And it's true that the CRX line didn't fare very well after its second generation. But beyond that, we haven't all lost the spirit of fun yet. In another 35 years, the CRX will still be a thrill to drive, and so will most of the Hondas from today—provided you can find gasoline for them.

I choose to take all that as evidence that we have good things in the pipeline. At the very least, this one manufacturer hasn't let us down yet.

Email the author at patrick@thedrive.com