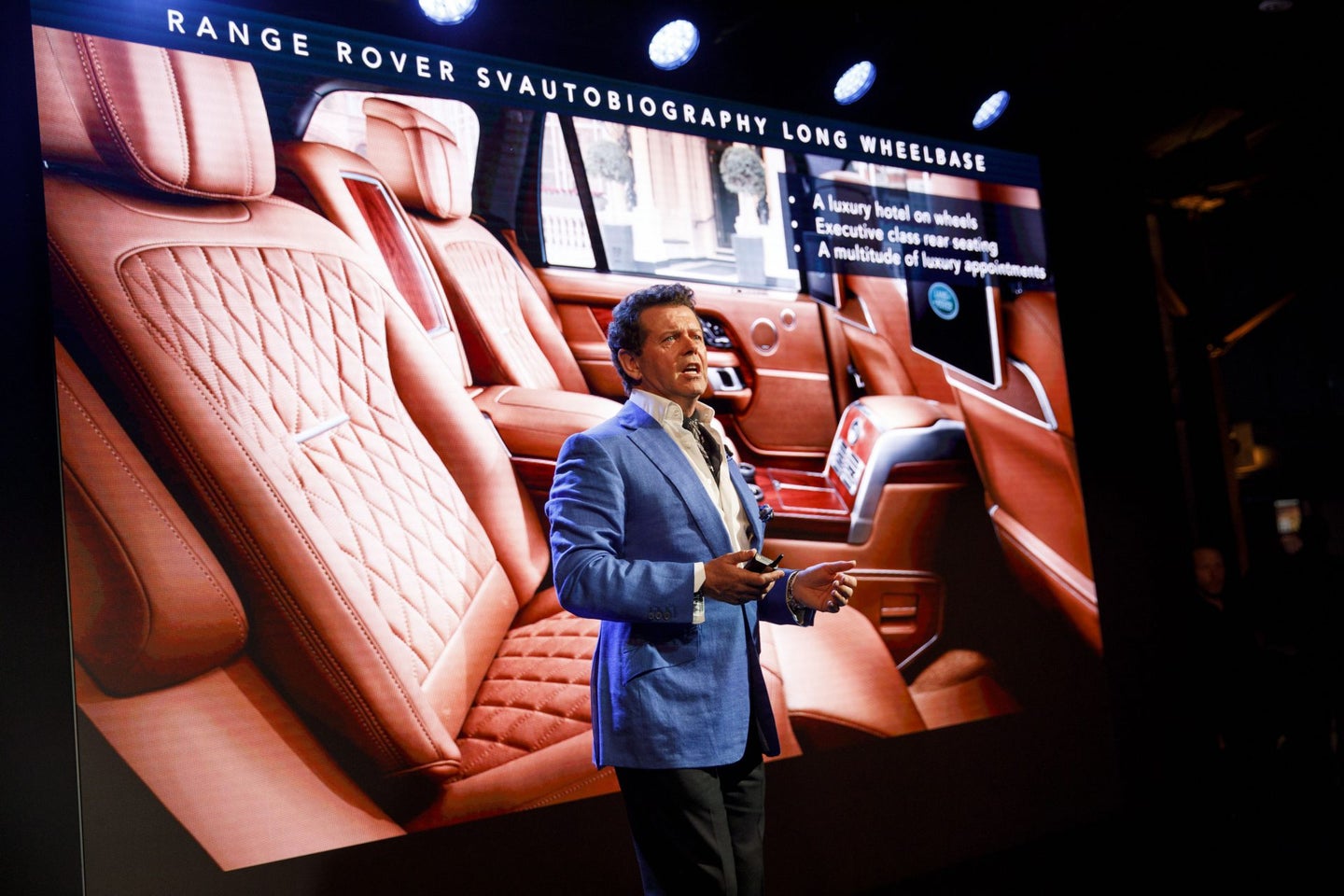 At the 2017 LA Auto Show I had the chance to sit down with Land Rover chief design officer Gerry McGovern to discuss the past, present, and future of the Land Rover brand, including its Range Rover family and its redesigned 2019 model-year Land Rover Range Rover SVAutobiography, which debuted at LAAS. Below is a partial transcription of that far-ranging interview, edited for flow and clarity, with Mr. McGovern.

On all the new brands getting into the luxury-SUV game:

"Good luck to them. If you compare Bentley to Range Rover, the volume difference is massive. First of all—and, by the way, I respect Bentley as a brand—they're not known for their expertise in off-road capability, and they haven't got the heritage. More importantly, they have an organization I'm not sure is conducive towards creating truly distinctive designs, because I think the Bentayga is fundamentally flawed in its volume and proportion. They've engineered it before they've designed it; we don't do that. We design the vehicle first, and then we engineer it. We have very creative engineers who we engage with to make feasible the design, as opposed to engineering something and then trying to make the design work around that. And by the way, that's reconcilable—that's not compromising the engineering to have that approach."

On the importance of heritage:

"DNA is what differentiates you, because once technology, quality, sustainability—whatever it is, once those things become comparable from one manufacturer [to] another, what are you left with? You're left with the DNA, the essence of your brand. Design is the essence, the conduit that communicates what it's about, so it's fundamentally important."

And on the limitations of heritage:

"We talk about Defender, and there's a lot of debate over talking to the traditionalists: 'Will the new Defender satisfy the traditionalists?' Well, with the greatest respect to them, they're not going to buy the new one anyway! So it's irrelevant; this vehicle will have to appeal to a whole new generation of people. Young people, people who aren't as cognizant of the brand as the traditionalists or specialists. So, does it matter? I've had customers come up to me on the stand and say, 'You're ruining this brand!' And I say, 'Oh, really? I'm actually making it a lot of money.'"

"We have a particular angle towards modernism, in terms of being reductive, clean, not being over-complicated."

On the watershed design moment that was the Land Rover Range Rover Evoque:

"That changed everything for us. In terms of our financial position, in terms of our culture—it made people realize that, actually, if you can design something that's distinctive, has character, and has that emotional connection with people, you're going to be successful. When we did Evoque, there were a lot of people saying, 'This isn't a proper Range Rover, it doesn't have this, it doesn't have that.' There was one marketing man who said, when we did the LRX [concept], 'We'll not sell 20,000 of these.' We sell 135,000 a year—we consistently have [sold that many vehicles] for five or six years. And did that heritage matter to that car? No, because it was a very desirable car. The realities are, when people looked at that car, they loved its character, they loved its compact nature, that sort of falling-roof-rising-beltline, that wheel-to-body relationship. They fell for it, and it's become a success."

On paying attention to the competition (or not):

"From a design strategy or philosophy point of view, I tend not to take any notice of what the competition are doing from a design perspective. I think that's a slippery slope. I know what our DNA is, I know how to cook those ingredients in a way that's absolutely appropriate for today; that's relevant. I think that's the important thing."

On the unseen forces influencing the shape of vehicles right now:

"There are things that have dictated [the shape of cars], aerodynamics being one of them, weight being another one, legislation absolutely, pedestrian impact ... I always like to remind people, when they go on about cars evolving from the 60s—whether the E-Type or a Mini—[that] to design a vehicle like that now would be completely illegal. While we have those sorts of restrictions, and even more if you add the challenges that are coming at us, whether it be autonomous driving, full electrification, mass urbanization—which will affect the way we design our vehicles—taxation, legislation, all these things, we have to find a way of embracing them without restricting the desirability of our products. We need to get even more creative."

On Tata Group's embrace of the power of design:

"When Tata Group bought Land Rover, Mr. Tata himself, who came from a design background—he was an architect—he was very adamant that design needed to sit fundamentally at the top of the business, to have equality with the other disciplines. In other words, at a senior level—and you don't get that in other automotive brands."

On bringing Land Rover into the modern era:

"We at Land Rover do have a unique heritage that has evolved over many years, but we're not harnessed by that. We acknowledge that heritage, but it is a case of looking forward. When I went back to Land Rover many years ago, I inherited what was called the Design Bible—it literally was, it was like a bible, it was that thick. It was full of design cues and philosophies that had evolved over many years, and what I tried to do with that was go through it and filter it, and say, 'In terms of a modern context, what's actually relevant here?' And that was the start of of defining a design strategy that was all about trying to create vehicles that were more universally desirable, as opposed to what we were then, which was very much a specialist brand appealing to people who wanted that ultimate in off-road capability. And in order for us to grow and become more relevant to more people, we had to change our approach, and design was a component [through which] we did that."

On stylistic references outside the automotive world:

"I probably come from a background that's not your typical automotive designer. Don't get me wrong, I love cars, but I'm equally inspired by fashion, architecture, product design. From a very early age, I was always very visually aware of my surroundings. I grew up in Coventry, which was bombed in the second World War, so it was rebuilt in an international modernist style; from a very early age I was interested in things that look forward, the "built" environment as opposed to the natural environment—which most people might find disturbing, but I celebrate brutalism in all forms of modernist design. When it comes to furniture, I've got the classics: Eames, Saarinen, Montoya. But of late I've moved away from that a little bit, maybe because I've become a bit of a snob and I want something less predictable. I love Gio Ponti, the Italian designer [and] architect. I've got some interesting pieces from Cassina. In terms of artists, some of them mid-century, late 60s: Victor Passmore, Joseph Albers—he was the founding father of modern printmaking, for example—I'm a big fan of Sam Francis, who's an American abstract painter. Picasso. I'm a particular fan of an Italian artist called Nino Mustica, who's still alive and a personal friend; I've got a couple paintings by him. Generally midcentury modern or abstract impressionism—I'm not into realistic paintings of farm yards."

The 2018 Range Rover Gets a Facelift, New Toys and a Plug-In Hybrid Option

In this case, “stuff” is a placeholder for a much saltier word.