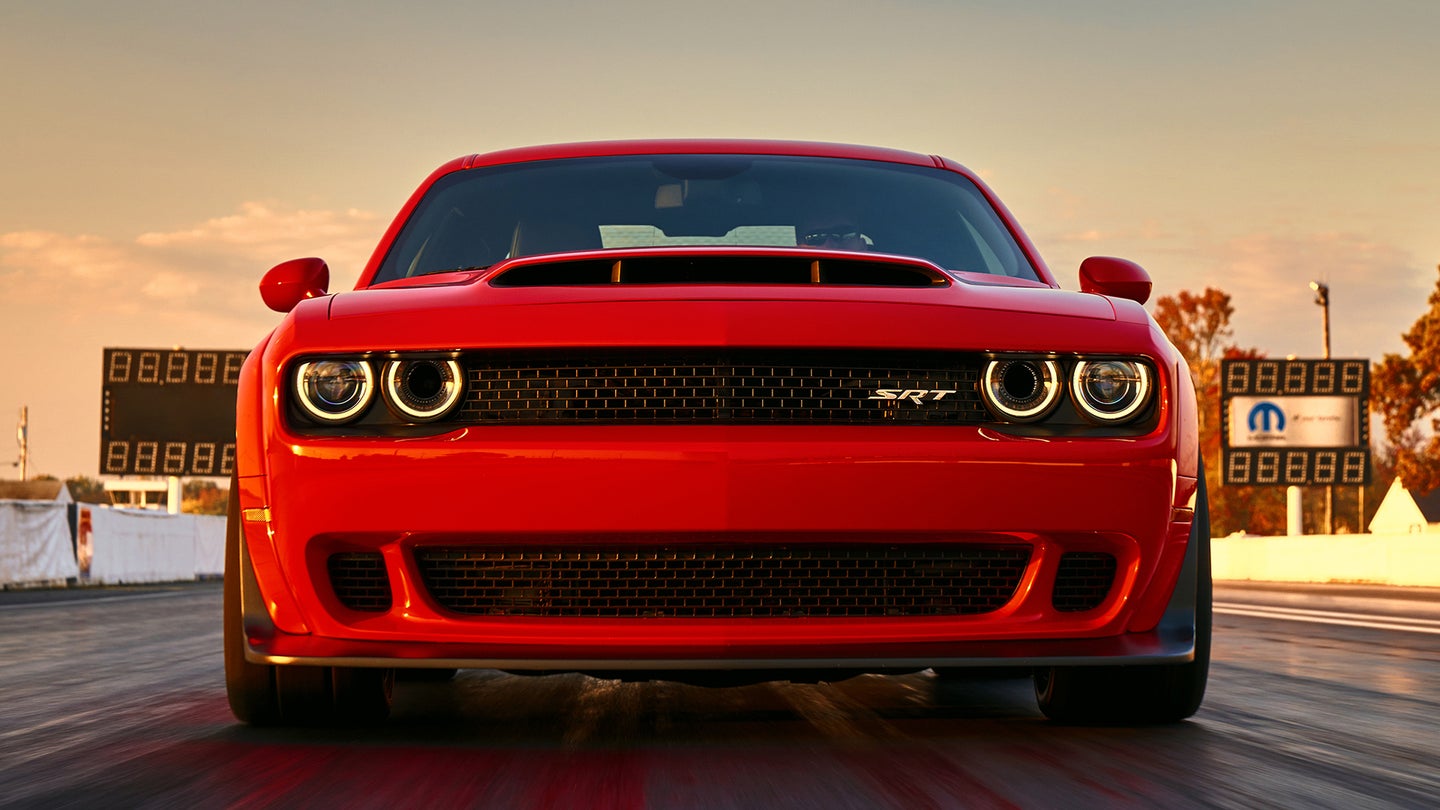 The Dodge Challenger Demon's 800-plus-horsepower supercharged Hemi may be the most obvious key to the car's hypercar-rivaling acceleration claims, but as any sprinter who's ever tried to run on an ice rink knows, all the power in the world won't do you a lick of good if you don't have traction. The Demon's sticky drag radial tires—specially-developed 315/40/18 units on all four corners, ostensibly to give drivers who opt for the Demon Crate and its skinny front tires a spare pair of drive wheels when they hit the strip—play a crucial role in helping the Dodge blast through the quarter-mile fast enough to force the NHRA to require it pack a roll cage before competing.

But those grippy tires and the wheels that wear them come with a caveat: They're too damn big for the Challenger's production line.

According to Fiat Chrysler Automobiles spokesperson Kristin Starnes, the 315 millimeter-wide drag radial tires are too wide for the assembly line where the Demon is made alongside other Challengers, as well as the Dodge Charger and the Chrysler 300. Instead, as captured in these photos posted on imgur, the car works its way through the assembly line on temporary SRT wheels; the production Demon rims and Nitto drag radials are then installed at the upfit center in Redford Township, Michigan, where the cars are readied for their journey to dealerships.

But as the folks on reddit's /r/cars pointed out, there's another potential problem with the drag radials that could affect the Demon: Those tires really, really don't like the cold weather. Not only do they lose grip as the mercury falls, the soft rubber can crack in below-freezing temperatures, effectively destroying the tires. Unfortunately, the Demon—like all Dodge Challengers—is made in Brampton, Ontario. As in Canada. As in, "The Great White North."

Luckily, the Demon is heading out into the world in the late spring, when such temperatures are less of a problem...but just because it's nearly June doesn't mean the Canadian weather will turn toasty. After all, the record low temperature for May for the Brampton-area airport is 22º Fahrenheit.