Some footnotes and details on the beastly Demon. 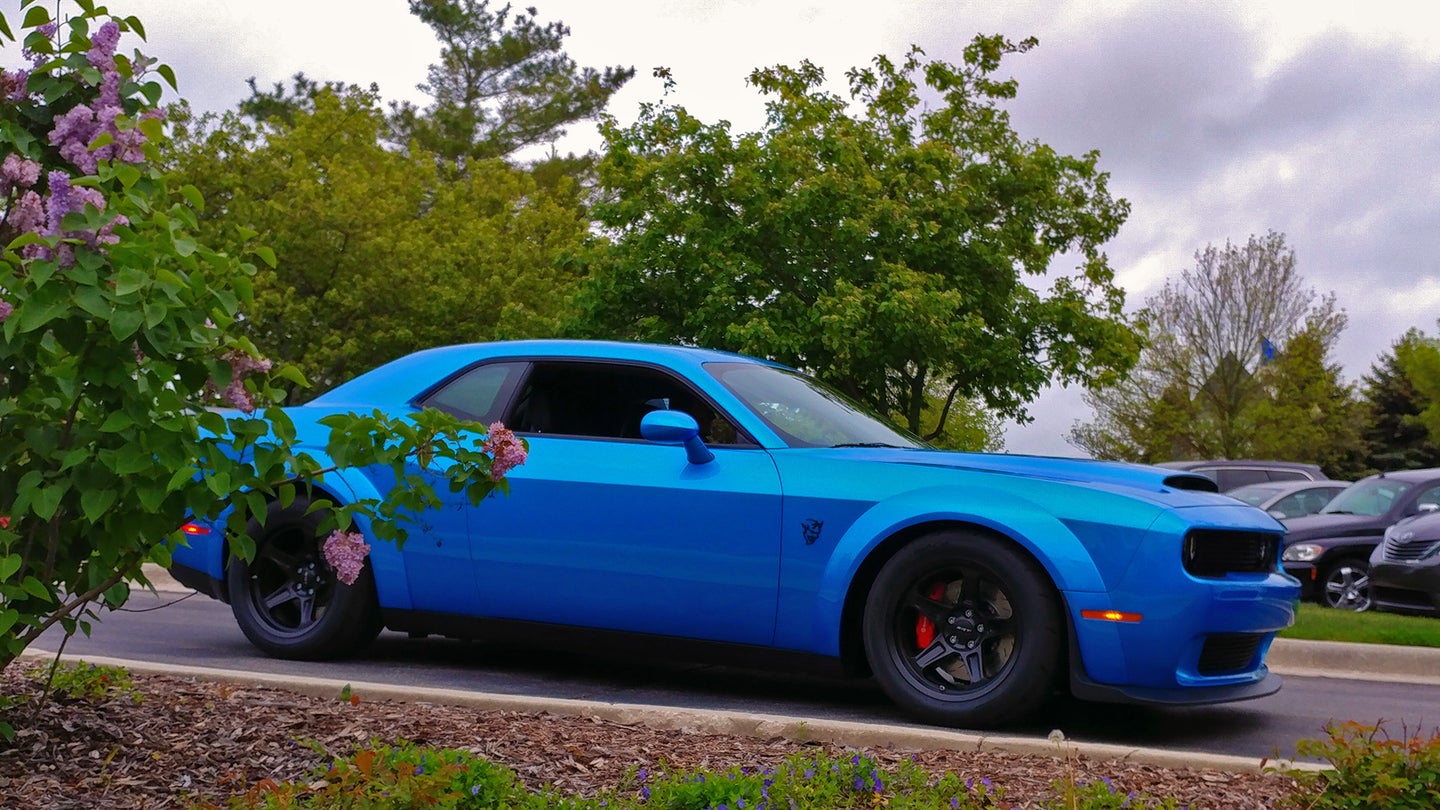 After spending time with the Charger Hellcat, I imagine that it would become a future classic due to the extreme nature of its performance.  With the announcement of the Dodge Demon pricing FCA is doing something slightly different: not charging absurd amounts for options. If an owner decides to add a rear seat or tuner crate each option only costs $1. It is more impressive considering what brands like BMW, Porsche and Ferrari charge for creature comforts on their higher end models.

Recently, I had an opportunity to visit the MAMA Spring Rally at Road America where Midwest journalists get to interact with brands, press, and a massive amount of vehicles.  This year at the annual dinner, SRT was on hand to unload a brand new Dodge Demon—along with Erich Heuschele, manager of SRT vehicle dynamics.  I took some time to ask him a ton of questions about the Demon while everyone was rushing the buffet tables.

The point of the Demon is to be an extreme production drag race vehicle, something rarely focused on in the industry. Tires are a hybrid Nitto compound that was developed specifically for the vehicle, which includes a proprietary compound and side wall changes.  The tires do not have a progressive compound change as depth wears, and should remain sticky until heat cycled out or dripping onto the pavement.

The suspension is identical to the Hellcat; there were no changes to bushings, wheel bearings, carriers, or much else, as the Hellcat was already over-engineered to be a capable road course car.  There are changes to rear control arms which were reinforced as well as re-tuning of the adjustable dampers to accommodate softer spring rates than the Hellcat.  The primary changes were to body structure to fit 315-series tires and wider wheels. There are heavy changes to engine, supercharger and cooling strategies.

The Demon is not designed for road course use; the cooling system will not hold up to high engine loads for long periods.  However, the vehicle is capable to running back-to-back quarter mile runs for 20 minutes straight with typical return-to-grid cool downs with no performance loss.

The interior space was designed for a single driver; additional seats are optional, as weight reduction was the key to the best run times.

The architecture of the Demon is a carry over and when I asked Eric about how they were going to handle the switch over to the Alfa Giorgio platform, I got the canned, "can't comment on future products," however:

When you have a solid architecture it can be modified over the years and improved upon. That is evident with the current generation chassis, which has undergone major upgrades since it was first used in the early 2000s.

Eric's point was that they have been able to do amazing things with the existing chassis, and it shares very little with the original design.  He was implying that it will be the same story in the future.

We also talked about price, and he made a point of saying FCA went to lengths to make the vehicle affordable.  The SRT team knows this is a toy, and at 3,300 units it will be treated as such.  He mentioned it would be nice to have aluminum sub-structures and suspension, but they were able to get the strength and performance in the Demon without it—and the benefit is cost savings.  Finally, I asked if there was anything off the table that he wished that could have been included:

If the engine guys could give us more power, we would take it.