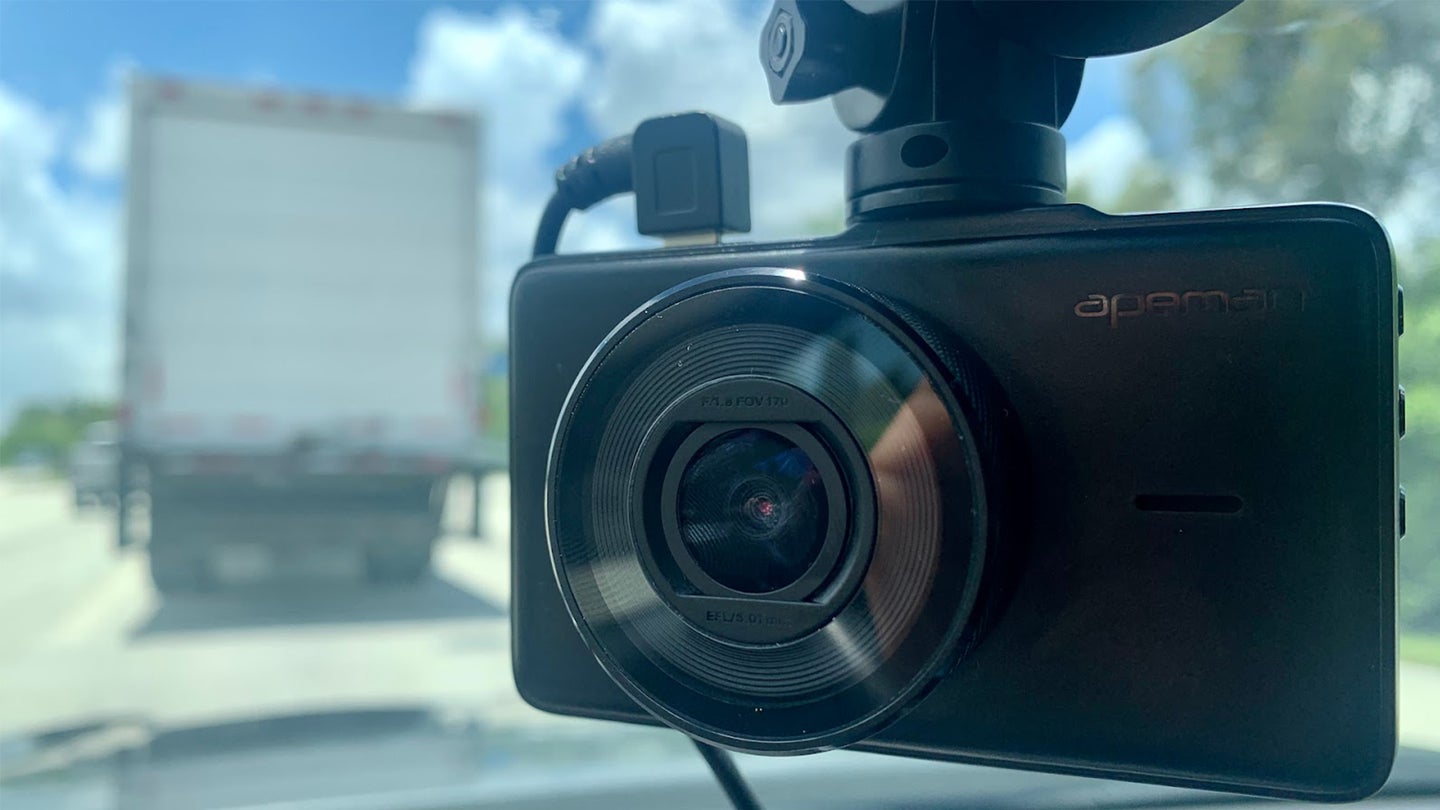 At first glance, dash cams aren’t immediately distinguishable from each other with the usual 1080p resolution, 170-degree wide angles, and 3-inch LCD screens. Blocky, minimalist cameras with nothing but a lens and four buttons are a dime a dozen. And without the name recognition of high-powered players like Garmin, lesser-known brands can be easy to dismiss.

The curiously named Apeman C450 breaks the mold in more ways than one. It is an inexpensive option offering no bells and whistles and providing occasionally orange-tinted and slightly pixelated footage rather than a high-resolution view of the road. It’s a passable, sub-$50 player in a space that sees top-of-the-line cameras go for hundreds.

The Apeman C450 is marketed as a budget cam, offering 1080p HD coverage, a variety of mounting options, and a decent 3-inch screen. It offers basic functionality with a few design and usability flaws.

How does a value option like the Apeman C450 perform in the real world? Does the low price point eliminate it from serious contention? To answer these questions, we put this dash cam through the wringer.

Even though it costs a bit more than a gallon of milk, unboxing the Apeman C450 offers as much excitement as uncapping a jug. It comes enclosed in a gray, 5-by-4-by-4-inch box with futuristic-looking white lettering, a 1080p logo emblazoned against an orange background, and a simple, low-resolution front image of the camera.

Upon opening the box, you are presented with an Apple-style welcome card with “Hello!” on the front cover. Behind that is an offer to order a free 32GB micro SD card. Strangely, Apeman doesn’t just package a card with the camera. Finally, there’s a 110-page user manual. Encased within a smaller box is the camera, wrapped in paper with a protective sticker over the lens. Beneath the box are all connectors, including the power cable, USB cable, and a strong, adhesive-backed suction cup. Consider this a no-frills presentation, with none of the heavy branding and excessive packaging of more expensive dash cams.

Getting After It With the Apeman C450

For this dash-cam review, we used a 2020 Genesis G70 and zipped around a leafy west Miami suburb. After unboxing, inserting a micro SD card, attaching the suction cup to the windshield, and installing the cameras, we were ready to go. The dash cam is lightweight with a simplistic layout. It has four buttons (OK, Mode, Lock, and Power) with up and down arrows, a Settings button, and the micro-SD card slot on the opposite side.

After pressing and holding the Power button for three seconds, you are presented with a low-resolution menu, heavy on black and teal, with options to set and adjust the date/time, auto power off, language selection, LCD brightness adjustment, and the ability to set a cyclic recording loop that allows it to keep recording when the micro SD card is full. This is set to 3-, 5-, and 10-minute increments.

From there, starting the dash cam for regular use is simple enough: Just press the OK button. To take or view pictures or takeoff watch videos, simply press the Mode button to toggle between the different modes.

You are also able to set Gravity Sensing to low, medium, or high, allowing drivers to adjust the sensitivity with vehicle movement. Its G sensor is able to detect movement in three ways: up/down, left/right, and forward/backward. The higher the Apeman C450 G sensor’s sensitivity, the more likely it will switch to Event mode, saving all footage for any incident that triggers the sensors.

Once we were on the road, the Apeman C450's video processing was pretty responsive. It produced a nice, fluid-moving picture with no lags or hiccups, albeit in a lower resolution than originally anticipated. On an overcast day, video quality was clear enough to make out the road but not much else with any precision.

What’s Good About the Apeman C450

Our favorite feature with the Apeman C450 is its price. It performs all of the bare-bones essentials, beginning with responsive automatic recording upon starting your vehicle. It has a zippy G sensor that does an excellent job of anticipating and recording trouble.

The Apeman C450's large, 3-inch screen does enough to serve most unfussy customers. The screen is large enough to toggle through settings and view footage well. The dash cam is also small enough to discreetly place it between the windshield and your rearview mirror, keeping your field of view open. If you don’t need high-level specs like 4K resolution, super-wide 170-degree field of view, and Wi-Fi connectivity, the Apeman C450 is an acceptable choice.

What’s Not Good About the Apeman C450

Our biggest gripe with the Apeman C450 is its image quality. Its 1080p resolution is respectable but may miss key details, such as vehicle license plates at night. Footage quality varied between decent and overly pixelated with no consistency no matter the lighting conditions. In bright lighting conditions, we found excess glare. We even noticed an occasional odd orange hue, especially with daytime footage.

One feature we would have liked on the Apeman C450 is a Wi-Fi connection. Downloading footage requires connecting the dash cam with a memory card to a computer using a standard USB cable, a labor-intensive interface for drivers who are constantly on the go.

Another major drawback with the Apeman C450 is the lack of an included memory card. It’s a necessity for recording functionality, but as with many off-brand dash-cam manufacturers we’ve seen lately, Apeman assumes the consumer knows this. There’s zero mention of that necessity on the package or in the instructions—other than the offer to have a free one sent to you. We’d prefer to see a micro SD included in the box and would be willing to spend a few extra bucks to have that plug-and-play functionality. Failing that, manufacturers should have it clearly spelled out on the packaging that a memory card is not included but is required for recording.

Our Verdict on the Apeman C450

With its value price point and limited features, the Apeman C450 is best for people who are not picky about high resolution, voice controls, an intuitive display screen, and other features found with high-end cameras.

If you regularly take road trips or shuffle between city and highway driving, we recommend higher-spec competitors like the Thinkware Q800Pro 2K QHD or the Garmin Dash Cam 56. But if you’re looking for a simple dash cam for occasional use and don’t want to spend a ton of money, the Apeman C450 is a solid option as a starter unit. Just don’t forget to bring your own micro SD card. 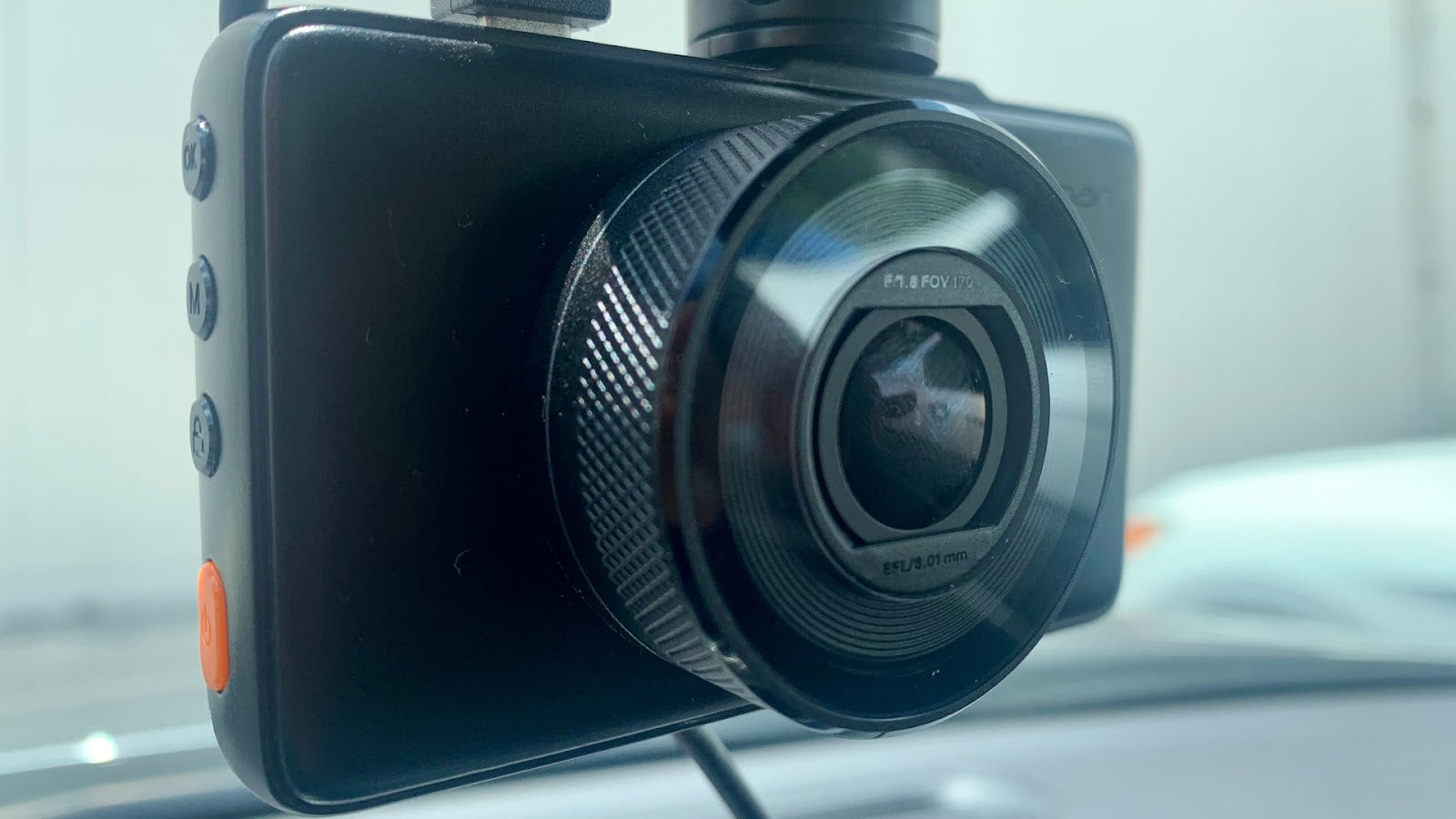 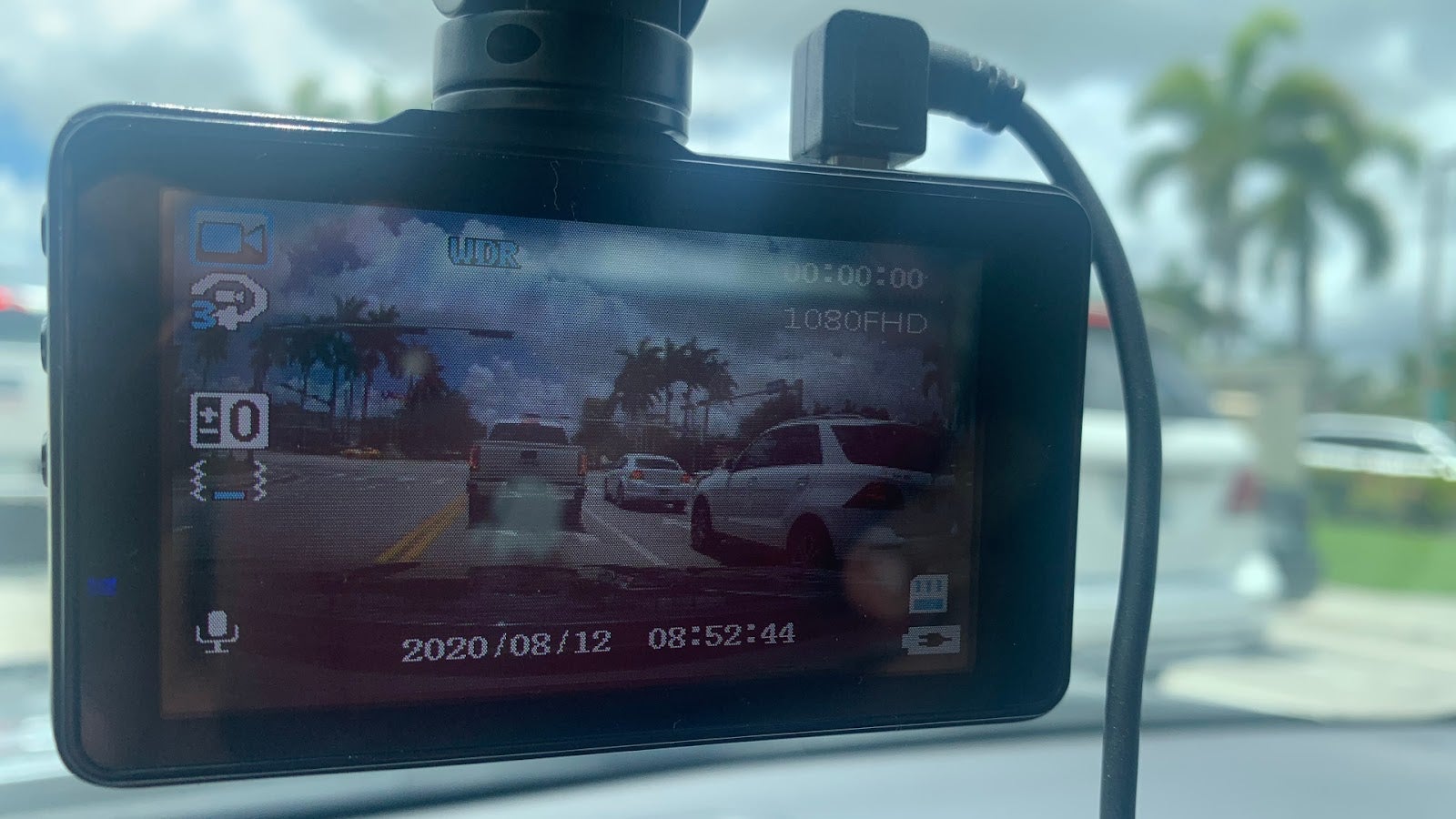 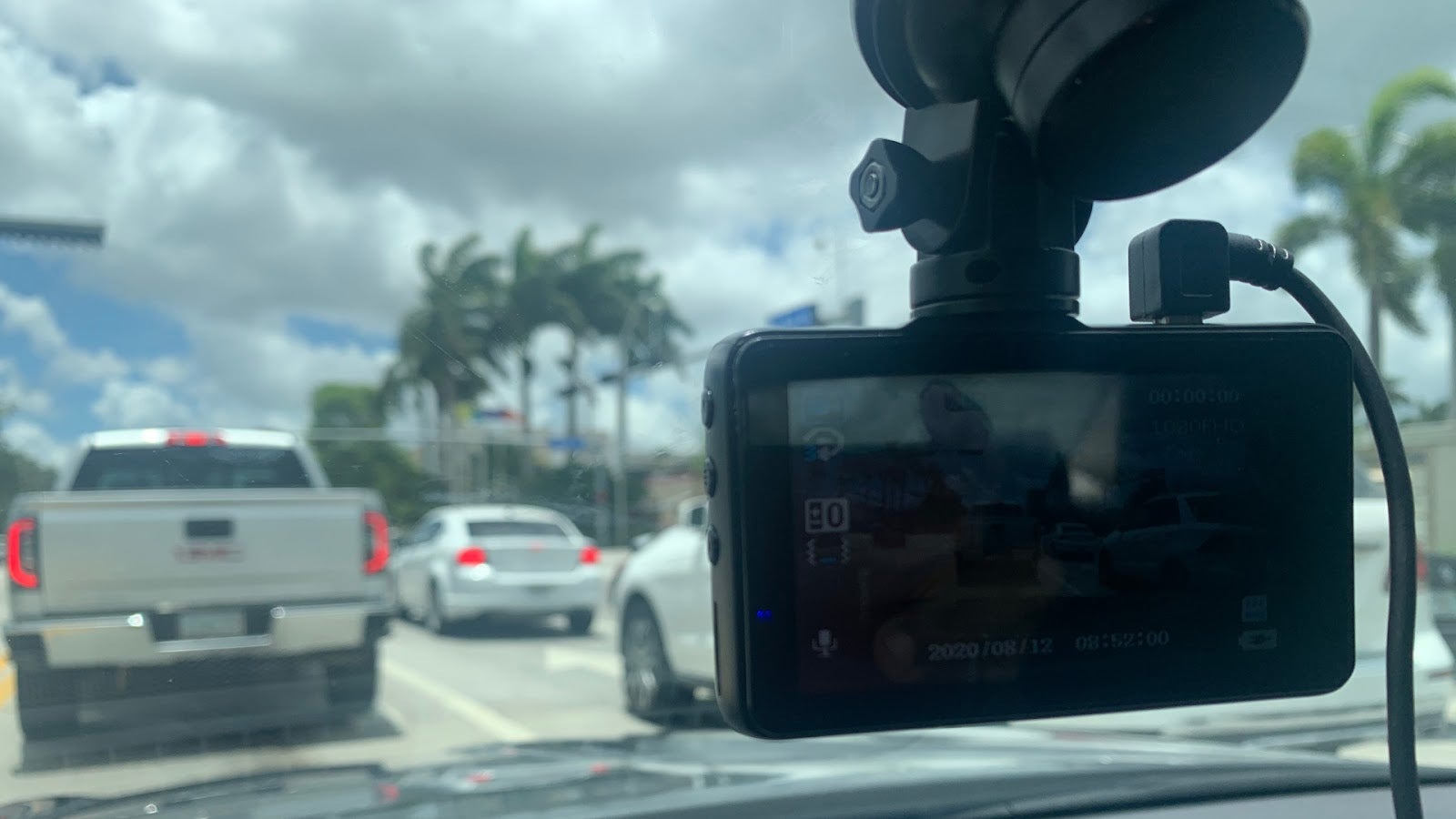 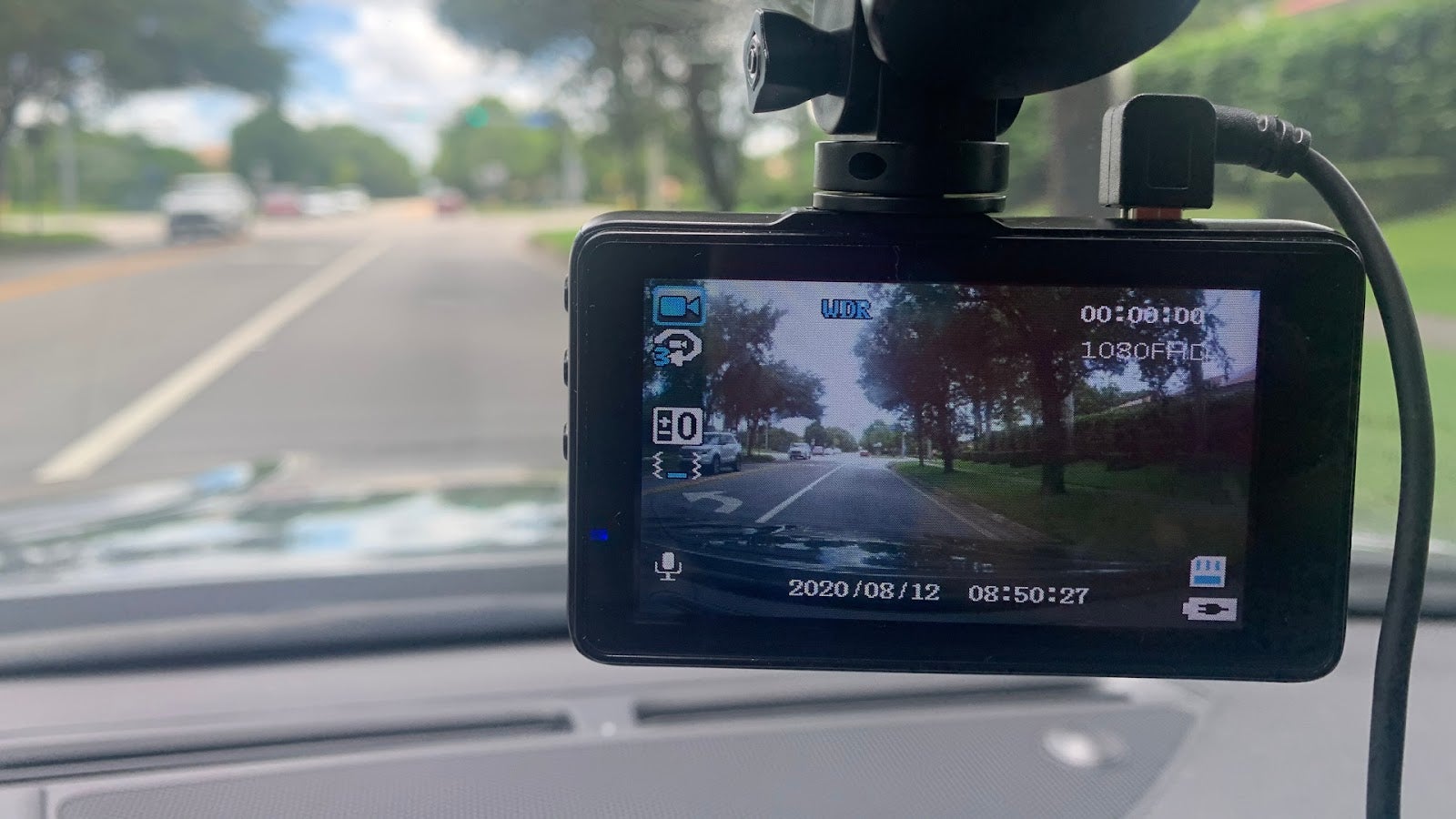 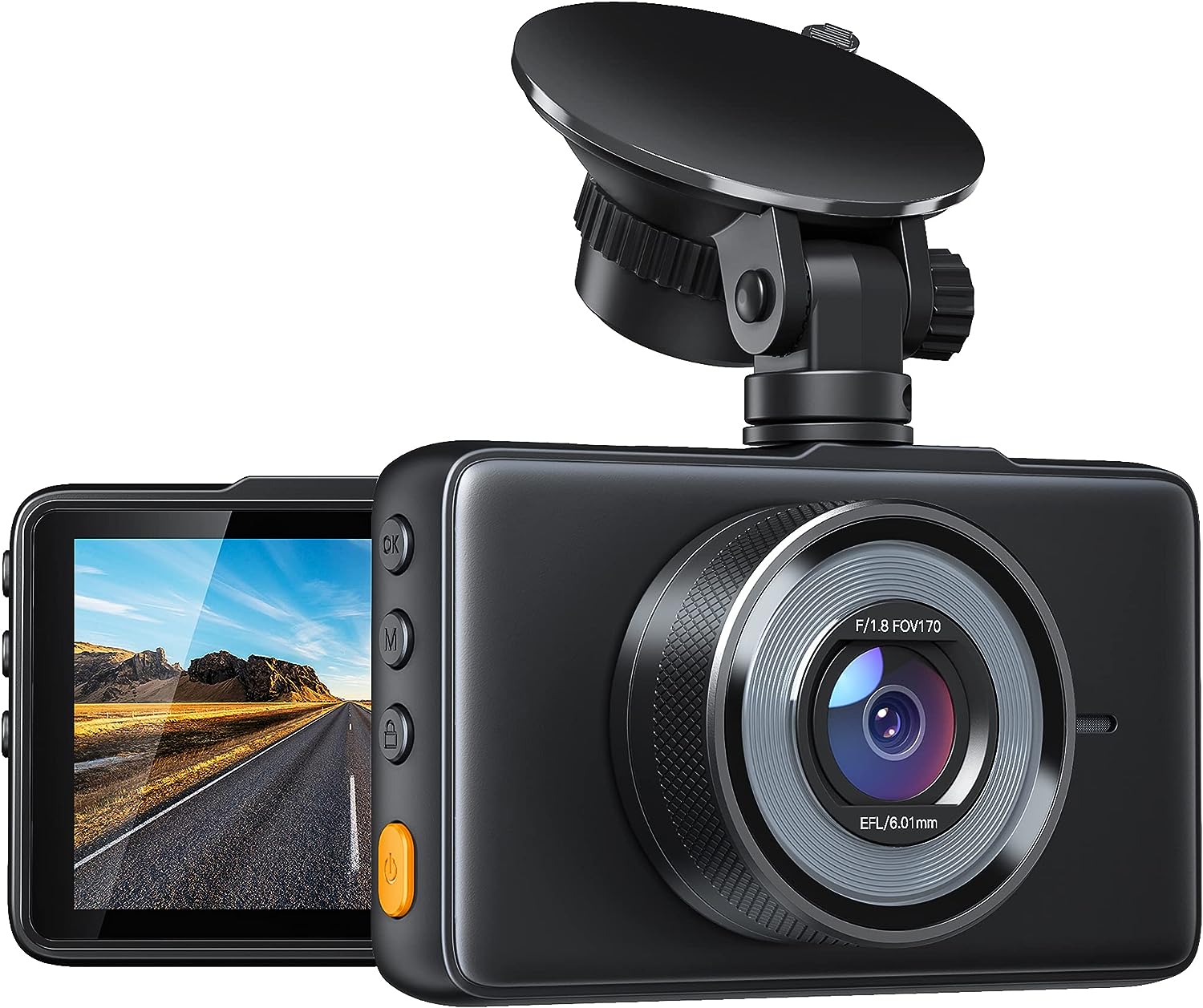 If you’re looking for a simple dash cam for occasional use and don’t want to spend a ton of money, the Apeman C450 is a solid option as a starter unit.

FAQs About the Apeman C450

The Drive’s editors aren’t psychic, so to answer other frequently asked questions, we scrolled through Google’s People also ask box for anything that may be lingering in your heads.

Q. How do I view footage on the Apeman dash cam?

A. First, acquire and insert a micro SD card. You can’t record footage or view it later without one. Then, simply turn on your dash cam, press the M button until you see the photo icon on the upper left side of the screen. Press the M button again to access your video recordings.

A. No, but the Apeman C450 does replicate night vision with a larger aperture and wide dynamic range. In our testing, however, the contrast between the street and the sky lacked detail in poorly and well-lit areas.

A. The Apeman dash cam is an acceptable choice for people who must have a cam but have little money to spend on one. If you can stretch the budget a bit, look at more advanced dash cams like the Thinkware Q800Pro 2K QHD or the Garmin Dash Cam 56 for a wider field of view, higher resolution screens, and Wi-FI connectivity.

The Drive independently evaluates gear by putting products in the hands of subject matter experts. The products we test may be purchased by The Drive, our staff, or provided for review by a manufacturer. No matter the source, our testing procedures and our assessments remain free from third-party influence.