EPAuto’s Tool Set Saves You Money, but How About Your Knuckles? Review

This set receives plenty of positive reviews, so it’s time to find out how honest they are. 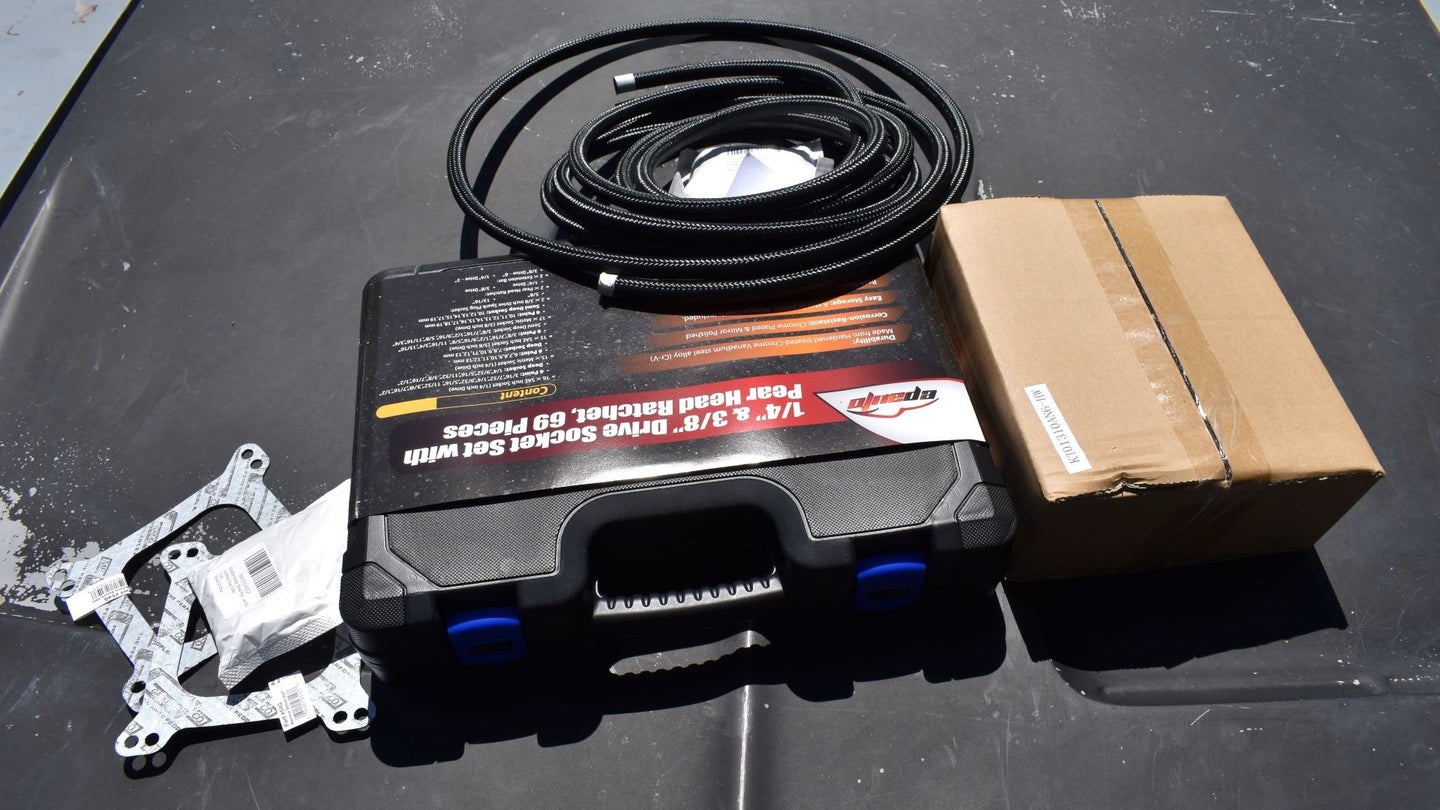 Are you better off saving money on tools or parts? Without talking about junkyard goodies and secondhand tools, we’d say you should invest your money in high-quality parts if your budget only allows for one or the other. It’s better to have your ratchet skip a couple of teeth than your timing gear. Knuckles heal, pistons don’t.

That doesn’t mean all budget-friendly tools are worth the trouble. If the tools are junk from the get-go, you won’t be able to properly install those shiny new parts. You just might blow something up anyway. There are plenty of tool brands dying to trade junk for your hard-earned cash, so homework is necessary to find out which are cut out for your garage.

Don’t sweat it; that’s what you’ve got us for. The Drive is all about testing tools so you don’t have to. Today, we’re taking a look at the EPAuto 1/4-inch and 3/8-inch Socket Set with Pear-Head Ratchet. It has thousands of positive reviews, comes from a more recognizable internet brand, and won’t break the bank. Let’s see if this set is something you can count on when parts eat into the money you’ve got to work with.

At first glance, the EPAuto mechanic’s tool set is OK. Scratch that. It’s pretty dang good. The first thing I noticed is that it comes equipped with 5/8-inch and 13/16-inch spark-plug sockets. I’ve tested 10 socket sets lately — you may have seen our coverage— and of the six I’ve tested so far, this is the first to feature both spark-plug sockets.

It’s fairly loaded for a set in this price range. You have a good collection of both metric and SAE sockets for the 3/8- and 1/4-inch ratchets (65 total: 31 SAE, 32 metric, two spark-plug sockets). You also get ratchets and extensions for both.

I can’t say I’m head over heels for the ratchets, though. They are packing 72-tooth mechanisms and have the rounded edges you’d expect of a mechanic’s tool today, but they sound and feel somewhat clunky. Regardless of my initial impression, I knew I had to reserve judgment until I started working.

The case that the tools come in isn’t half bad, either. It is yet another blow-molded case, however, it has some fancy latches and does a decent job at keeping all of the sockets in place. Unfortunately, that’s only if you hold onto that foam insert. The sockets sit somewhat loosely in their dedicated cavities.

After a brief time ogling the kit, I started up a project that’d put this set to the test.

Getting After It With the EPAuto Mechanic’s Set

Have you ever started a project thinking it shouldn’t take long, but it turns into a thrash session that lasts several hours? Unfortunately, that’s what I wound up with here, which is good (longer, harder test on the tools) and bad (I need a drink).

The project I wanted to use this set for was overhauling my 1969 Dodge Charger project car’s plumbing. What I originally thought to be a vapor-lock issue wound up being a system plugged with all kinds of gunk and sludge. I ended up cleaning parts of the fuel system I intended to reuse, replacing the fuel lines, cleaning my carburetor, replacing my spark plugs, and so on.

At the end of the day, I wound up spending more time with this set than any of the other sets I’ve tested so far. While it did hold up, the more in-depth test showed a few issues you’ll want to know about.

I’ll start by saying that I should have spent more time looking over the kit. When I picked up the 1/2-inch deep-well socket to remove my carburetor, I found out that it had been slaughtered in some horrendous manufacturing mishap. Maybe that’s an exaggeration, but the drive square was chewed up enough to prevent me from fitting it to the ratchet.

Thankfully, I was able to slip the shallow 1/2-inch socket over my studs. Those in the same boat could spend some time with a Dremel tool to remedy the issue, though you shouldn’t have to. That wasn’t the only annoyance I ran into. The directional switch on the 1/4-inch ratchet is extremely easy to accidentally engage, and I spent a lot of time just clicking it back into the direction I wanted.

After I finally wrapped things up, I decided to take things a step further and have a look inside the ratchets. Working with the somewhat dated twin-pawl ratcheting mechanism, the system isn’t that bad. It may not be as good as the newer single-pawl designs, and the lack of contact with the drive gear does limit the amount of stress this system can take, but it’s workable. However, I have seen the springs that engage the pawls with the drive gear fail on a few occasions.

The thing I like most about it is how well-equipped it is. Aside from the occasional combination wrench, screwdrivers, and cutoff tools, I didn’t need much other than what this tool kit has to offer.

The fact that nothing broke is a big plus, too. I mostly used the 1/4-inch ratchet for tightening band clamps, but even when dealing with the other bits of hardware over the course of a few hours, there were no hiccups. I also like that EPAuto is stamping the sizing into the sockets rather than setting us up with laser etching. A bigger font would be better, but at least it’s not going to wear away after a few uses.

This tool set sits well below the $100 mark at the time of this review. That's less than half the price of many other similarly sized kits on the market, making it a clear choice for someone on an extremely tight budget.

Even if this kit is decent, it’s far from perfect. Constantly having to change directions really was the biggest annoyance. I agree that it might seem like a minor issue, but it quickly becomes a major setback when working in awkward positions.

I found I’m not the only one to run into manufacturing defects. It seems that it’s a fairly common issue, and that doesn’t bode well for the set, even if EPAuto seems easy to work with and will send replacements. If you needed that exact socket to get your daily driver up and running and didn’t have backups, you might not have the option to wait several days for the new one to come in.

You should also know that these aren’t the most durable ratchets. I didn’t break anything, but the tasks I performed aren’t that demanding. From what I can tell from a visual inspection and via the reviews, applying any significant levels of torque quickly leads to stripped teeth. Again, these ratchets have a twin-pawl mechanism, and there isn’t much contact between the pawls and the drive gear, so the failure of these parts being relatively common isn’t a surprise.

Overall, I’d say that this is a pretty decent little kit to keep in the trunk of your car. For very little money, you get a tool set that’s fairly loaded. The range of socket sizes and ratchets is going to allow you to do quite a bit of work on your car. That’s really all that matters to some folks.

Despite having such good value, it wouldn’t be my first suggestion. Unless you’re on a shoestring budget, I’d have to recommend saving up for something of better quality. Even if I did rely on this kit to get a lot of things done, I wasn’t all that hard on the tools, and I can’t see them taking too much abuse.

Despite having such good value, it wouldn’t be my first suggestion.

Q. Is EPAuto made in the United States?

A. No, just like seemingly every other budget tool set, EPAuto’s tools are made in Taiwan. I don’t think we could expect to see anything different at such a low asking price.

Q. Are EPAuto tools any good?

A. EPAuto tools aren’t bad. They just aren’t as good as a lot of the others I’ve dealt with. You will be able to get plenty of projects done with this tool set, but I can’t say I have much faith in it holding up. I’d imagine a few stubborn bits of hardware will take quite a toll on the ratchets.

A. Yes, you need a socket set. Combination wrenches are very useful, but they can’t compare to sockets and ratchets in terms of efficiency. The amount of time you’ll save alone is well worth the investment.

The Drive's Gear section is our brand-new baby, and we want it to grow. In the interest of clarity, we want you, our dear readers, to know that the products we get in arrive from a variety of sources, including those we purchased ourselves and those we receive from manufacturers. No matter the source, we maintain our editorial independence and will always give you our honest assessment of any product we test.

Let’s Find Out if GearWrench’s Socket Set Is Truly Among the Best: Review

Maybe you should overhaul your arsenal with GearWrench tools.

Does the New Craftsman 40-Piece Mechanic’s Tool Set Live Up to Its Former Self?

Time to find out if Stanley restored Craftsman to its former glory.