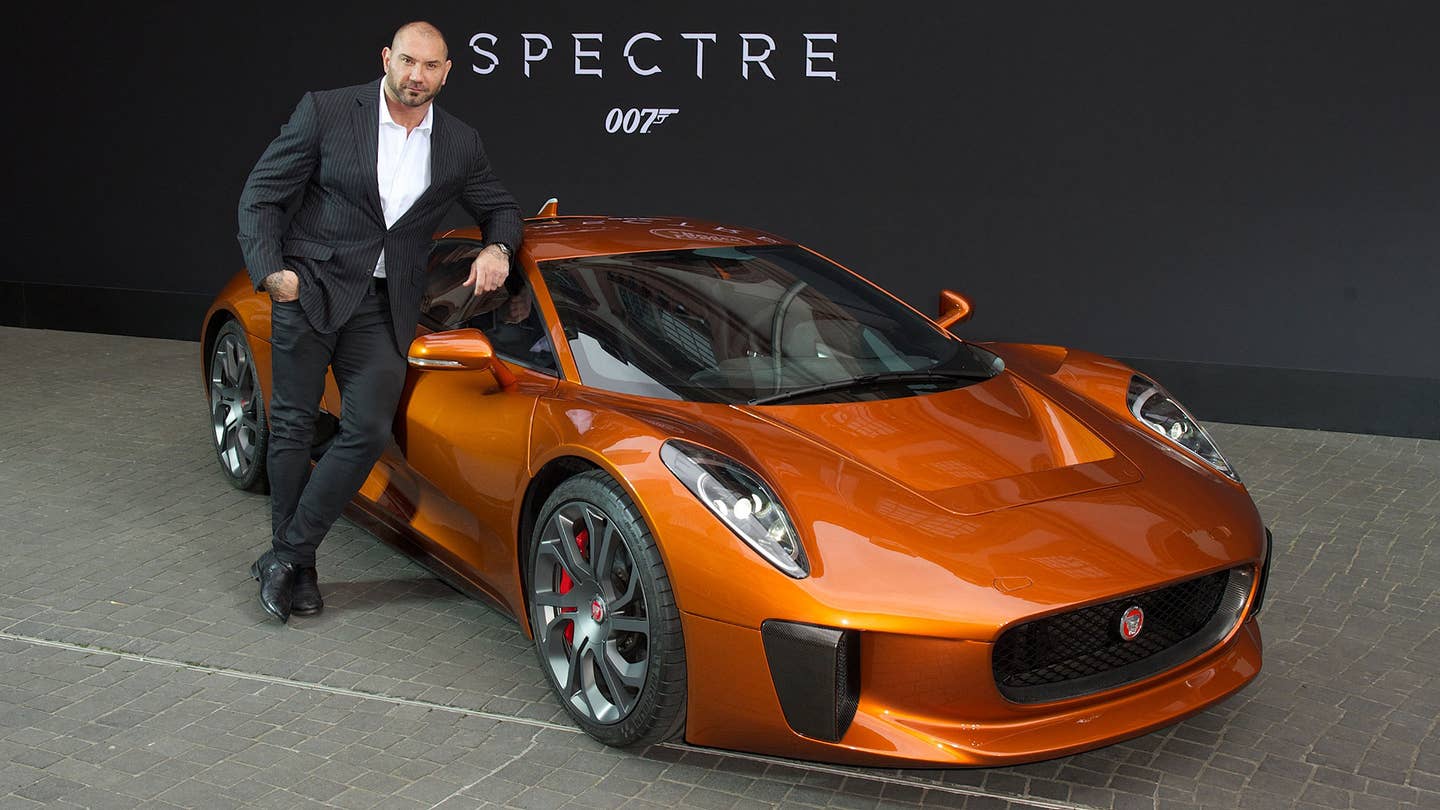 Dave Bautista is a champion WWE wrestler (stage name Batista) and mixed martial arts star. Like many of his brawling peers before him (Hulk Hogan, Andre the Giant, The Rock), the six-foot-five athlete has turned to acting. If you saw Guardians of the Galaxy, you might recognize Bautista from his role as alien muscleman Drax. And when you go to the theater to see the new James Bond movie Spectre on Nov. 6, you can catch him in his role as Mr. Hinx, menacing henchman to Christolph Waltz’s Franz Oberhauser.

For its part, Jaguar continues its Villain Academy/Good To Be Bad promotional theme by providing a car for Hinx in the new film, an updated version of its C-X75 Concept of 2010, retrofitted with the snarling V8 from its F-Type sports car. We ran into Dave on the red carpet at the unveiling of Jag’s Spectre-specific vehicles during the 2015 Frankfurt Motor Show, and asked him about training to be a Bond henchman, driving a priceless showpiece and being mobbed in stadium parking lots in Chicago.

The Drive: Though we lack the build for it, we can almost imagine what it might be like to train to be a WWE champion. But how do you train to be a Bond villain?

Dave Bautista: I had a nice talk with the director [Sam Mendes]. That was about the extent of my preparation. He said that Mr. Hinx is the baddest man on earth, and he knows that nobody is a threat to him, so he doesn’t have a care in the world.

An enviable position. Do you have a favorite Bond villain from the past films?

Oh, it’s Oddjob. Oddjob for sure. I think there was just something about his smile. He had this smile, this happy demeanor about him. And also, the hat. The killer bowler hat. How can you not love that?

You’re seen driving this amazing vehicle, the Jaguar C-X75, in the movie. Did you have the opportunity to actually get behind the wheel?

Oh, yeah. When I first showed up, they wanted to make sure I fit in the car. So, they squeezed me in, and we just drove around a little, just to get the feel, go over the basics, the shifting and everything. And then when we were [filming] in Rome, they needed shots of me driving the car, so I was driving a little bit. But a lot of the larger stunts, the drifts and turns, I can’t take credit for. That was all stuntmen. Don’t tell anyone, but that was not me. [laughs]

What’s the most embarrassing thing that’s ever happened to you in a car?

I’m sure like everybody else I’ve been caught picking my nose. I mean, who hasn’t? But one time, I was at a WWE event in Chicago that my wife came to, to pick me up. She came in for the event and had a few drinks, and forgot where she parked our car. And we spent hours looking for it. Not only that, but the fans had come out, and they saw me in the parking lot. So while I’m looking for this car, for hours, I’m getting mobbed by fans. We waited until the parking lot eventually cleared out, and we finally saw it. That’s the truth.