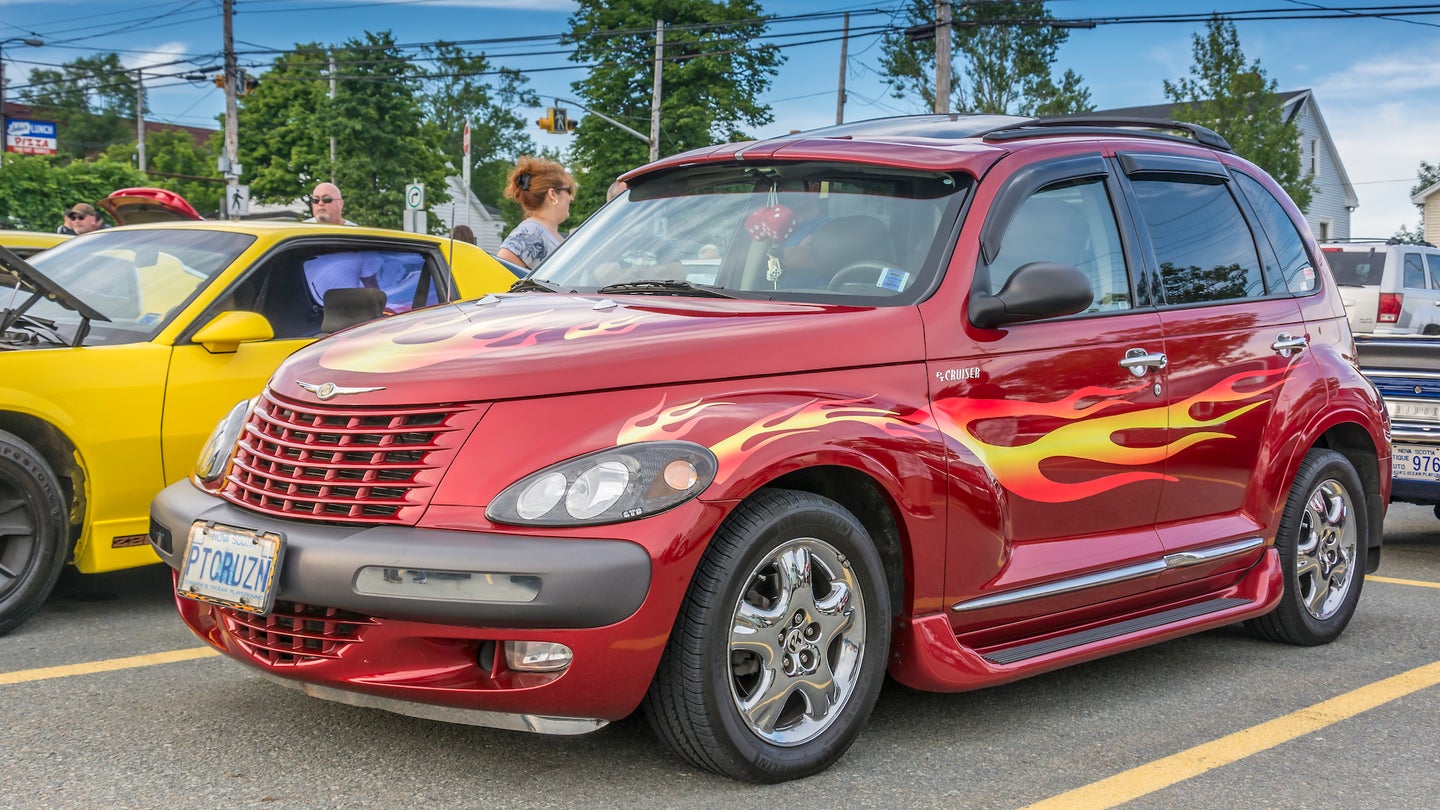 Like it or not, the humble Chrysler PT Cruiser is en route to classic status. But while its neoclassic lines are what made the car a surprising sales success in the Aughts, they're not the reason why the car's kitsch will catch on again. No, that'll happen because in post-irony America, there's a growing appreciation for things that exist unapologetically as they are—and like it or not, the PT Cruiser's distinctive design and of-the-moment ethos are starting to stick in our cultural memory.

To understand how we'll end up there, let's go back to the year 2000, when Chrysler launched the PT Cruiser. It was a time when Boomers were collectively reaching their midlife crises or early retirement, with a longing for the past and money in the bank—not to mention a fair number of the Greatest Generation still holding fast to their drivers licenses. The Big Three caught wind of this and flooded the market with neoclassical cars like the Ford Thunderbird meant to evoke the hazy past. Buyer looked at the Chrysler PT Cruiser, the cheapest of the revivals, and saw the cars of their youth fused with modern amenities like automatic transmissions, safety, and air conditioning. Americans scooped up over a million PT Cruisers before Chrysler ended its production in 2010.

Younger generations weren't so bewitched. Without the judgement-clouding firsthand experience of the cars that inspired it, it was impossible to ignore the PT Cruiser's suspect build quality, chintzy aesthetics, and poor reliability. Once the economy took a dive in 2008, even the Boomers couldn't overlook these issues, discarding their PTs en masse as they trickled down into the used car market and eventually ended up in the driveways of people with slightly less means. It's surprisingly rare to see one on the road today.

Since then, a PT Cruiser with oxidized headlights and peeling clear coat has become emblematic of economic strife and deferred maintenance. At their most sympathetic, enthusiast reactions to the car today consist of a double-take, usually accompanied by a snide comment. The Chrysler PT Cruiser is an evil that must be felled with irony; the deserving butt of a joke.

But for every IPA-swilling heckler, there's another young person that grew up riding around in the back of one of these downtrodden Chryslers. These were the cars of their childhood. Maybe it was there at the right place, at the right time, with important people around. Mom coming home from the hospital after weeks. Taking the dog to be put down. Christmas at Grandma's in 2005.

These connections mean that while the PT Cruiser was originally a throwback to Boomers' pasts, it was actually there the pasts of today's rising twentysomethings. Many of them will relate to the PT Cruiser with a genuine fondness without their forebearers' sardonic bite. They'll have to acknowledge harsh truths about this questionably-built car, sure, but reckoning with poor product decisions is part and parcel with being an enthusiast.

Eventually, they'll realize that they don't have to temper their reverence for anyone's sake, as they themselves will already know everything bad there is to know about the car. They won't deny that the PT Cruiser was built (poorly) in Mexico, that its styling is at best polarizing, that the car was legally, pitifully classified as a truck to help boost Chrysler's fleet-wide average fuel economy. These new-old PT fans will be ready to fly the flag of what the little Chrysler means to them. It'll be an earnest appreciation that transcends even the current wave of post-irony.

Because as crappy as the Chrysler PT Cruiser may be, it'll represent something profound to its fans. Driving one, to them, will be a bittersweet, but fulfilling experience, just like every stage of the PT Cruiser's life so far... and just like all of life's unforgettable moments.

How do you make the ugliest car of the 2000s cool? The answer is: this.