This Pickup-Based, Ferrari-Looking Thing is the Weirdest Custom Car You’ll Ever See

It’s like a driveable version of the race car bed you had as a child. 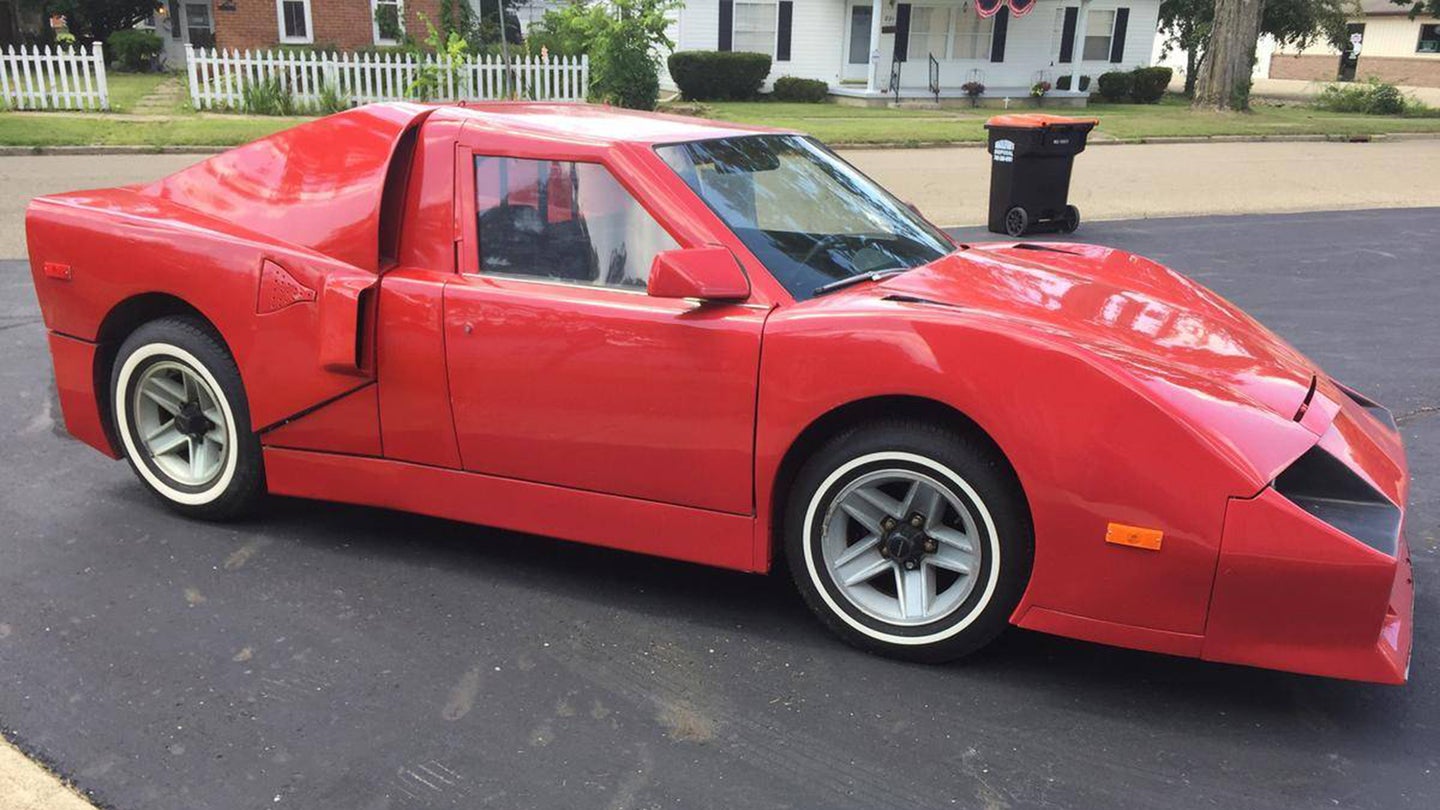 This is the Fire-Arrow. It is a custom "replica" creation made by someone who we can only assume has a very twisted sense of humor. It certainly looks like something; like several somethings, in fact. But it also might be completely genius.

The Fire-Arrow is currently up for sale on Hemmings.com with no listed asking price. There is no price or value that can be put on this "car" (we'll get to the "car" part shortly) other than it's worth whatever someone is willing to pay for it.

At first glance, one might think that someone built a car to look like the race car bed they had as a child (and may still have as an adult). There is definitely a resemblance. It also might look like someone made a replica of a Fiero-based Ferrari F40 replica. A replica of a replica is about as twisted as it gets.

The Hemmings listing gives you some basic information and boasts about the car. It's listed as "1995 Replica." We'll let the seller fill in the details:

"Here is a "one of a kind" hand built road rocket! It features a Fuel Injected, Mid Engine Aluminum Buick 215 V8 and a VW 4 speed transaxle. Custom built 1.5x .062 wall chassis. Rack and pinion steering, power disc brakes..50/50 weight distribution and 2500lb curb weight means she runs and corners like it's on rails! Hand formed .050 sheet aluminum body with styling ques taken from Ferrari, Camaro and maybe a Fiero. Clear Ohio title. Love it or hate you have see the work to appreciate it."

The Buick 215 V8 that powers this custom job will put out 200 hp on a good day when it's tuned to do so. Let's give it the benefit of the doubt and say that it does. That does not make this a "road rocket." Since it weighs in at 2,500 pounds, it probably feels like it has a little get-up-and-go under the hood. Well, not really the hood as this thing is mid-engined.

Questionable build quality, and panel-gaps aside, something about this "car" struck me as odd. I kept getting a pick-up truck vibe from it. When you look at the cockpit, it really looks like a truck. Low and behold, look at it from behind. That is definitely a pick-up truck under that hot-mess of a body kit. It still has the sliding rear window on the back of the cab.

So let's recap. This is a 1995 Chevy S-10, stripped down, with a mid-mounted (at most) 200 hp Buick V8, wrapped in a hand-made body kit that resembles a replica of a replica Ferrari F-40, that has the nose from a third-gen Camaro. Who would do such a thing?

But when you think about it, it's really pure genius. Using a small 1990s pickup truck is perfect for this sort of creation. You get a sturdy frame underneath with a two-seat cab that is completely enclosed and doesn't need to be chopped. Once you take the bed off, it's easy to mount the engine back there. That does change the weight distribution to something more akin to a racer. Strip off the truck's body work and replace it with something lighter and more aerodynamic and you are in business. In theory, and in the right hands, it's brilliant.

This custom job is less than brilliant, but no less genius. It's probably a blast to drive and is certainly a head-turner. To the right person, this could be your track day diamond-in-the-rough. Maybe Dale Jr. is in the market for replacement S-10 that he can really thrash around in retirement.

Also, it appears to come with a can of Fix-A-Flat where one might put a fire extinguisher in a car like this. Maybe that's a good sign? Ferrari and Fiero looks without the chance of fire. What more could you want?