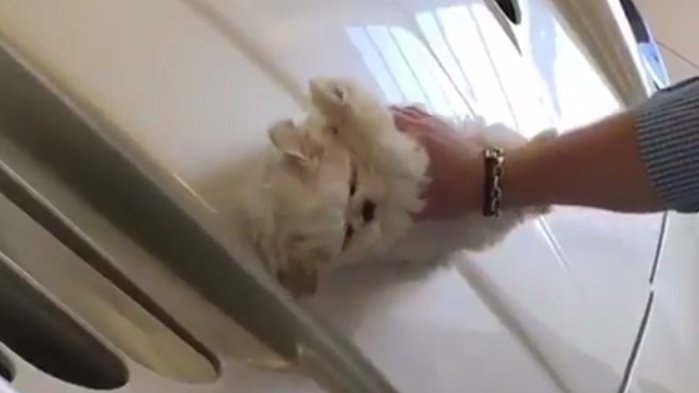 On the appropriately named Instagram page Rich Kids of London, user @m666ya shared a brief video of someone gently rubbing a gorgeous Maserati MC12 with a tiny white puppy. The caption on the video reads: "The only way to wash the iconic 6.0 litre #MaseratiMC12 is with 100% natural puppy fur ensuring a proper polish. (No puppy was harmed in this video - all smiles and tail wags here)." It's a couple seconds long and the seemingly content puppy barely moves at all. View at your own risk.

So, basically, it's rich kids making fun of themselves for being rich kids by "polishing" a rare supercar with "100% natural puppy fur". As you can imagine, many the good people of Instagram were not amused. Here are just a few of the comments:

"It doesn't matter if you were gentle with the dog or not; the point is, you've DONE it- rubbing a puppy over yr car. Its clearly an abuse and its disgusting, yr attitude. Shame on u"

According to Instagram, gently rubbing a puppy on a car is punishable by death. There were a couple comments like the following which defended the short video, but they were greatly outnumbered by the loud opposition:

"Chill guys! He seems very gentle to the puppy. Look at the puppy's face, if he's in pain he would try to flee or bark or sth c'mon...."

As far as I'm concerned, this is not a big deal. The puppy does appear to be fine and this isn't much different than giving him a little rub on a tile floor or something. If anything, I'm a little offended that somebody allowed a dog to be in the same room as an MC12.

This Story Has Pictures of Puppies (and Mazdas)

Mazda rivals Subaru as the most animal-friendly manufacturer. Here’s an example.