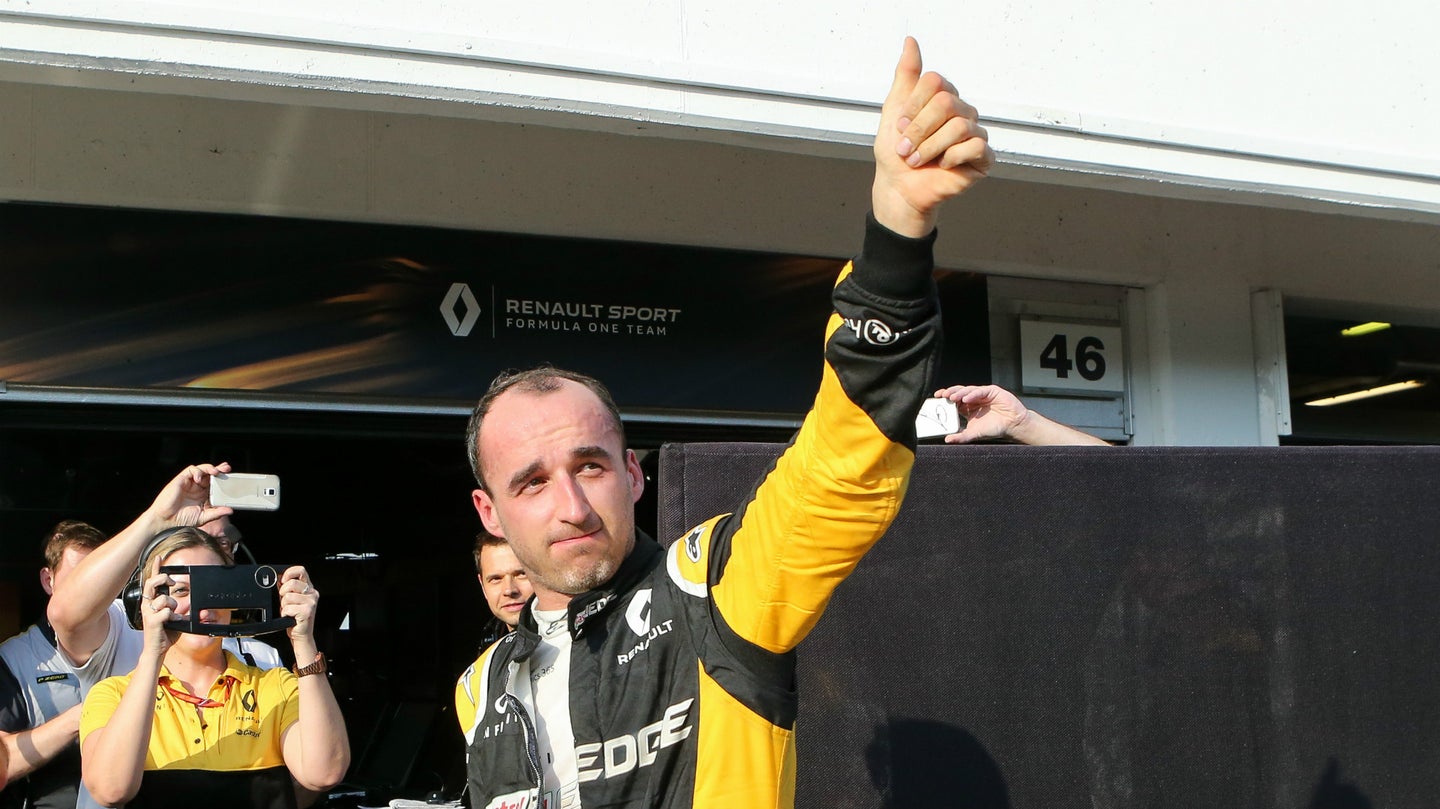 Wednesday The Drive covered Robert Kubica's long-awaited test in a current Formula One car at the Hungaroring. We analyzed his lap times as best we could, with the limited information available to the public, concluding that despite putting up slower lap times than either of the current Renault Sport F1 drivers, there was no need to be disappointed. Instead, our optimism found sanctuary in the fact that he was so close to Jolyon Palmer, despite having less practice in the car. We theorized that the long runs were more a physical trial than anything, to see if Kubica's damaged right arm was able to withstand the current cars, and that having pace would just be icing on the cake. Kubica confided to Autosport that he felt no pain in his right arm during or after the test.

Globo Esporte interviewed Ricardo Penteado, Renault Sport F1's Trackside Operations Manager, who confirmed that Kubica's arm is now proven not to be a handicap in his driving. "He has no problem to pilot the hybrid cars [sic]," stated Penteado.

Kubica, despite setting out on the fastest Ultra Soft tires, was unable to complete a qualifying simulation run. The session was red flagged, prematurely ending the second day of testing, and denying Kubica the chance to see just how much pace he had in him.

It has been revealed that Kubica's fastest lap of the day, a 1:18.572, was not set with a fuel tank close to empty. "Kubica did not have gas in the tank just for that lap," said Penteado to Globo Esporte. It was also stated that each unnecessary kilogram of fuel slows a driver by 0.03 seconds per lap. Though it may not sound like much, when we re-analyze Kubica's best time when compared to Jolyon Palmer's Q2 time, 1:18.415, we are led to believe that if Kubica's fuel load was even 6 kilograms greater than that of Palmer's (which we suspect it was), he's already the faster driver.

While it could be argued that the track was rubbered in after a long Grand Prix weekend and a prior day of testing, the higher track temperatures serve to partially offset that advantage, as does the potentially large deficit caused by fuel loading.

What can we gather from this new data? We now know that Kubica can be faster than his times suggest, if he's given the same opportunities as Nico and Jolyon. The decision from Renault won't come overnight, and even if they rule against Kubica, it won't be in favor of Palmer— they may even choose Formula 2 driver Oliver Rowland. That speculation, though, is for another day.

The Lowdown on Robert Kubica’s Hungary Formula One Test

Testing is done for the day. Here’s what we’ve learned.