The Lowdown on Robert Kubica's Hungary Formula One Test

Testing is done for the day. Here's what we've learned. 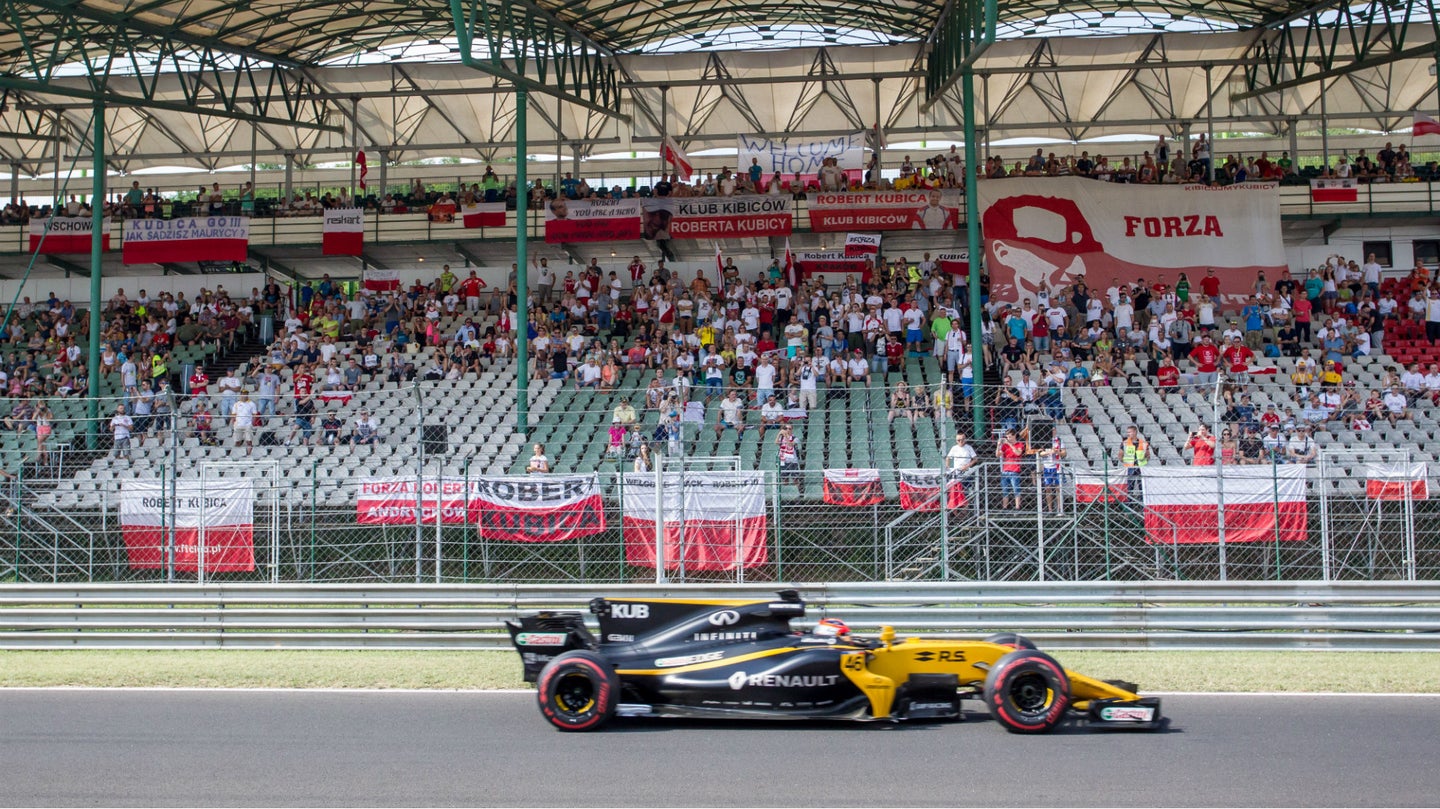 For weeks, we have been anticipating our chance to see Robert Kubica back in a current Formula One car. We got that chance today, when Kubica completed 142 laps of the Hungaroring between the morning and afternoon test sessions, cheered on by an army of fans from the main grandstand. Half way through the day, Kubica met the requirements for an FIA Super Licence, passing the 300-kilometer mark on his 69th lap. His best time in the morning session was a 1:19.681, and in the afternoon, 1:18.572, gaining over a second throughout the course of the day's events.

To put that into context, the fastest race lap for a Renault was 1:21.589, set by Jolyon Palmer. Palmer's best qualifying lap was in Q2, when he put down a 1:18.415, and Nico Hülkenberg later pipped him in Q3 with a 1:17.468. This puts Kubica within two-tenths of Jolyon Palmer after less than a full day of testing, whereas Palmer has practiced, qualified, and raced in the R.S.17 for a full eleven race weekends. The temperature may be in part to blame for the delta, with peak temperatures during the race weekend not exceeding 33º C, whereas today's temperatures reached as high as 36º C.

Furthermore, Phillip Horton of GPUpdate, who was present at the test today, describes Kubica's performance as quick and smooth, but reserved, with minimal use of curbs. He states that he saw no obvious faults in the way Kubica handles the physically demanding 2017 cars.

As Kubica mentioned in an interview yesterday, his pace is one of the less important factors to examine after today's testing. Never mind the fact that the general public knows nothing of the factors differing between today's test sessions and the real qualifying and race sessions, such as fuel load, tire compound, track temperature, and setup— this test's first priority was probably gauging whether or not Kubica could overcome his injuries and withstand long runs in a current Formula One car. Not only has he proven himself capable of enduring a full race weekend (condensed to one day, no less,) but he has also shown the ability to match Jolyon Palmer from right out of the gate.

As of the end of the test, no decisions have yet been made regarding Kubica's potential comeback. When asked by Crash if Kubica is yet an option for 2018, Alain Prost replied, "we’ve said that we have a decision for F1 next year, not next week. [...] He has recovered, for sure. I wish that he can come back to Formula 1 if possible.”

Kubica too is unsure what this test means for his future in Formula One. "It has been an incredible journey to this point, where I have answered many questions to myself," said Kubica, "it’s too early to say what the next step might be."

We are left with some positives to reflect on. Robert Kubica has proven his injured right arm does not stand between him and driving modern Formula One cars at race pace, for race distance. With a fraction as much practice, he is nipping at the heels of Jolyon Palmer. Nothing is set in stone, but the chisel and hammer are out.