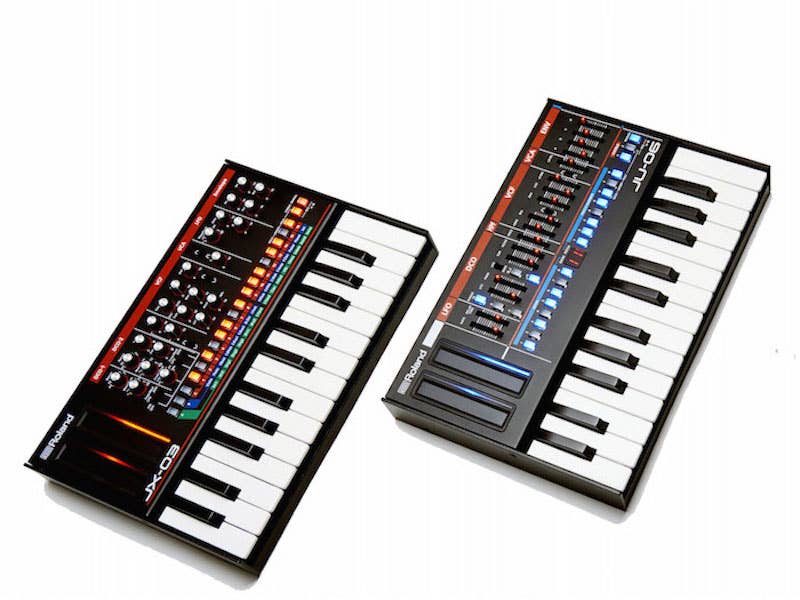 It took a couple decades, but synth-pop is back. The Weeknd is at No. 1 with “The Hills,” synths tuned low and hair piled high; resurrected pop prince Justin Bieber holds the No. 2 spot with “What Do You Mean,” which layers Andean flute over its kicky synth line. Eighties music, once derided as overproduced and hopelessly electronic, is getting pulled out of the critical trash bin, polished up, and praised. The Los Angeles Times called Taylor Swift’s ”Style,” the most synth-heavy song on her album, a “sensual funk track.” How bomb.

Why not catch the wave, and start bleep-blooping yourself to stardom? Roland, maker of the classic D-50 synthesizer, has just released three portable, miniature synthesizers. Built-in speakers and battery operation makes these book-sized instruments extra-portable; you can stash one in your backpack or briefcase for lunchtime doodling or an impromptu schoolyard synth-off. After a couple beers, you’re always saying you have one great pop song in you. Prove it.

Before you get to composing, you’ll want some period-appropriate inspiration, which is why you’ll need this pristine 1987 Pontiac Fiero GT. Pop Michael Jackson into the tape deck, turn up the several watt stereo, and groove to “Bad,” a tune built on Roland D-50 patches. The creative atmosphere will be enhanced by the GT’s exuberant blue paint, iconic wedge shape and two-tone snowflake alloys. May we suggest “Fiero Felicia” as the name of your lead single?