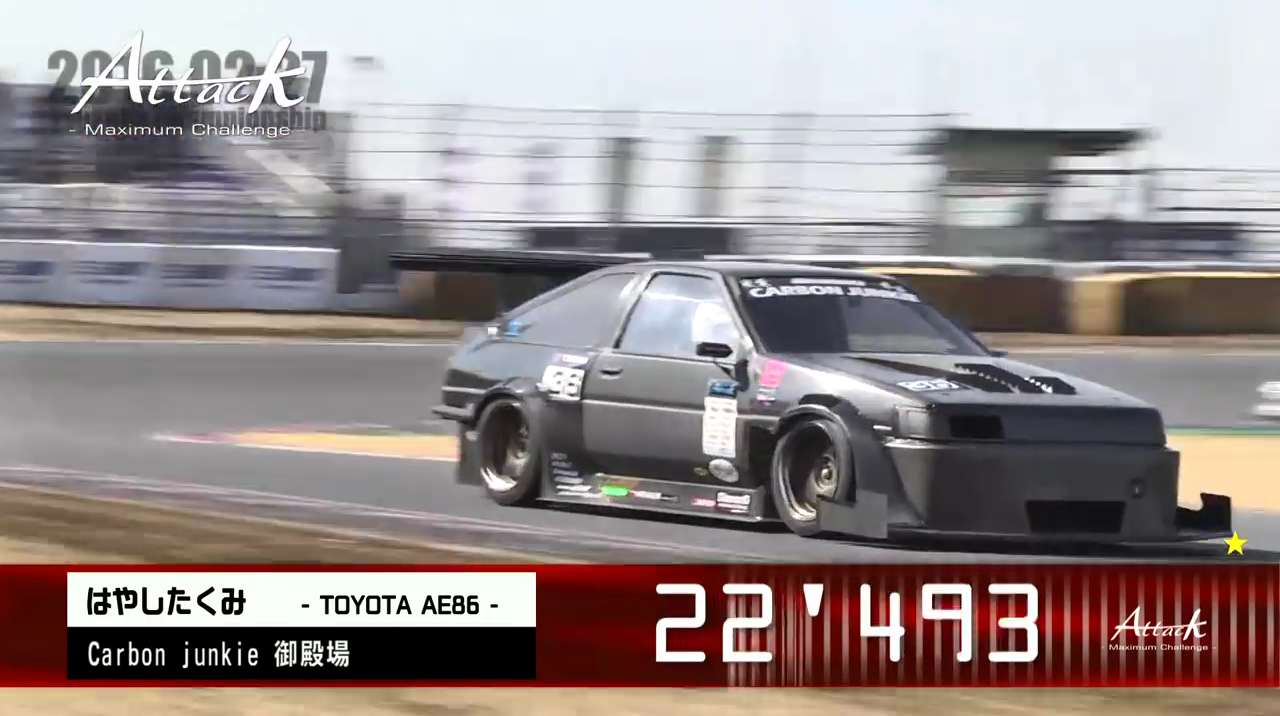 For the generation who grew up reading Initial D manga and idolizing Keiichi Tsuchiya, Toyota’s humble AE86 is nothing short of legendary, yet it’s hard to believe the original Hachiroku is now 33-years old. And even though the AE86 is no spring chicken, tuners are still able to find ways to teach the old dog new tricks.

Takumi Hayashi’s Carbon Junkie Toyota Levin AE86 track monster is built for time attack and managed to break the one-minute barrier at Tsukuba Circuit back in January this year. Even for cars like the Toyota Supra Turbo and Nissan Skyline GT-R, Tsukuba’s one-minute barrier is considered the tuner’s equivalent to Mount Everest—many people spend their whole lives chasing that time. And for an old naturally-aspirated Hachi, the climb to the summit is exponentially more difficult.

Under the hood, the Carbon Junkie AE86 retains a 16-valve 4AGE engine tuned to 220PS, or about 216 horsepower. It’s an impressive figure for an N/A AE86 for sure, but 1-minute Tsukuba challengers often boast power figures that are twice as great. So how does Hayashi-san manage that disadvantage? Lightness - we’re talking about a full-carbon diet.

The Carbon Junkie AE86 took about six years to develop. In that time, its aero bumpers, massive front splitter, custom hood, hatch, door skins, roof, fenders, chassis-mounted GT wing, quarter glass, virtually everything, has been converted to dry carbon fiber. Inside, the cabin is completely stripped and the factory dashboard has also been replaced by a carbon fiber panel housing a RacePak digital gauge cluster. Is it overkill? Maybe, but the numbers don’t lie: Hayashi’s carbon 86 with full aero weighs less than 800kg—less than a Lotus Elise.

As tuners have moved on to more powerful platforms like the Mitsubishi Evo IX or more aerodynamic platforms like the Mazda FD3S RX-7, it’s exciting to see Hayashi-san stick with the old icon and continue to push its envelope. We can’t wait to see what’s next for the Carbon Junkie Hachiroku.

Check out Hayashi’s 59.234-second lap at Tsukuba Circuit below: