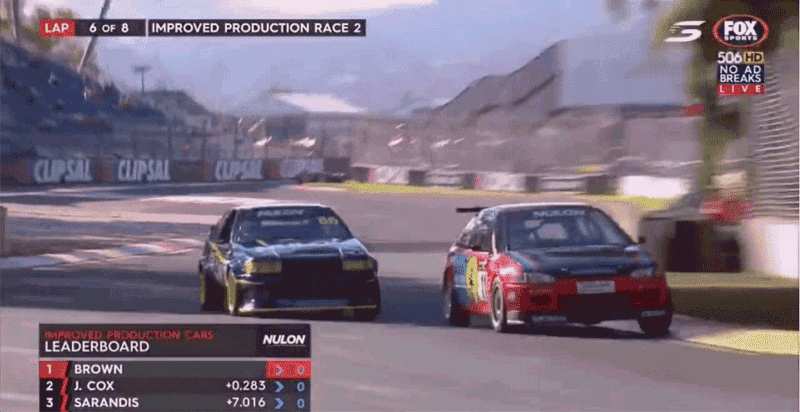 I'm about to jot down the V8 Supercars calendar. No, not for the V8 Supercar races itself, but for its Improved Production Challenge support race. Last month, we shared an epic battle at Bathurst between Jordan Cox and his Honda Civic EG hatch versus a V8 Holden Commodore and an old Celica, which you can watch again by clicking the link here. From the looks of the past weekend's Improved Production race in Adelaide, Cox is starting to make a habit out of dueling Toyotas – his B20 Civic was in the mix of yet another heart-stopping dogfight against a blistering Levin AE86.

In the brief sprint to the finish line, the nimble Civic once again demonstrated the effectiveness of momentum driving at its best, slicing through corners without equal. The difference in performance between the two cars were separated by the narrowest of margins, but in a seldom seen matchup, it's actually Chris Brown's buzzing 3SGTE AE86 that is faster on the straights and less aggressive in the corners. Because of this, Cox must drive with a more defensive approach this time, attempting to box Brown's AE86 on the straights and desperately trying to hold that advantage around the twisties.

The race really heated up at the 1 minute 35 second mark of the video, where Brown managed to put the nose of the 86 right alongside the Civic as the cars head into the end of the main straight. Without skipping a beat, Cox threw his car into the Senna chicanes, hanging on the outside of 2 to get the inside line of Turn 3. It was a beautiful pass, but sadly short lived as the Hachi Roku's grunt manages to pull past the Civic once again.

The race continued to remain extremely close and I couldn't help but hold my breath for the second half of the final lap as the two cars made contact and swapped paint until the very end. This is without a doubt the best Civic vs. Hachi Roku battle I've seen since the gum tape deathmatch battle between Takumi and Shingo from Initial D: First Stage. Check out the amazing battle at Adelaide between Jordan Cox and his Honda Civic hatch Vs. Chris Brown and his Toyota AE86 below: