Dodge Viper Isn’t Quite Done Yet 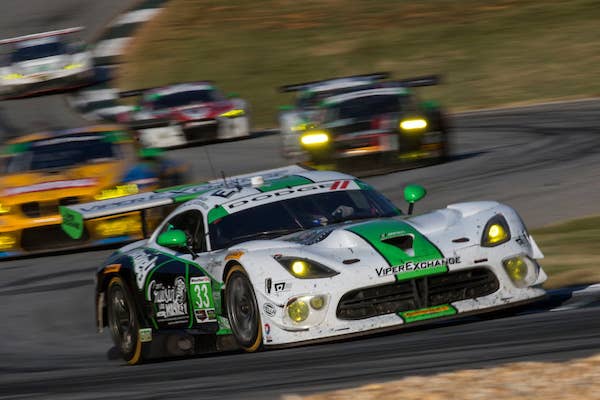 Many of us assumed that when Ben Keating and co-drivers Jeroen Bleekemolen and Marc Miller gave Keating's No. 33 ViperExchange.com/CruisinwiththeMonkey.com Dodge Viper GT3-R a proper sendoff Saturday with a victory in the GT Daytona class (in the photo above), and a second in the IMSA WeatherTech SportsCar Championship season points after Petit Le Mans at Road Atlanta, that that'd be the last we see of the Viper except for vintage competiton.

Many of us were wrong.

While the Dodge Viper will no longer be seen in IMSA competition, the successful GT3-R race car is not going away from the worldwide racing scene. Several Dodge Viper GT3-Rs will continue to compete overseas, and a renewed effort in Pirelli World Challenge is in the plans for 2017.

“The short-term future with the race cars, and we are racing over in Europe right now, is to be in Pirelli World Challenge next year with multiple teams," said Erich Heuschele, SRT Motorsports Engineering Manager, and an accomplished race driver himself -- he kicked my ass in the Neon Challenge series more than once. “Hopefully we will have at least three entries, and we are working on setting that up right now. Unfortunately, we are going to walk away from IMSA for 2017, but we still have GT3-Rs in the field, we still have customers who want to race this car, and they are buying race cars to run in World Challenge.

“The Viper is going to be made through the 2017 model year. So, we’ll have a full 2017 production run which has already started. Viper ACRs and GT Customs in particular are still quite popular. If you want one of the last thrilling, analog cars that rewards driving skill, get an order in to Ben Keating or your local dealer before 2017 runs out. This is the end of an era."

As proven, Keating, whose ViperExchange.com is the world's largest Viper dealer, is a pretty good race driver himself -- he kicked my ass more than once in the Dodge Viper Challenge series. (I seem to get my ass kicked a lot when I race.) Keating and his team manager, Bill Riley, will be back next season, just not in a Viper. Yes, we know what he will be driving, and no, my ass has not been kicked in that particular make of car. Yet.