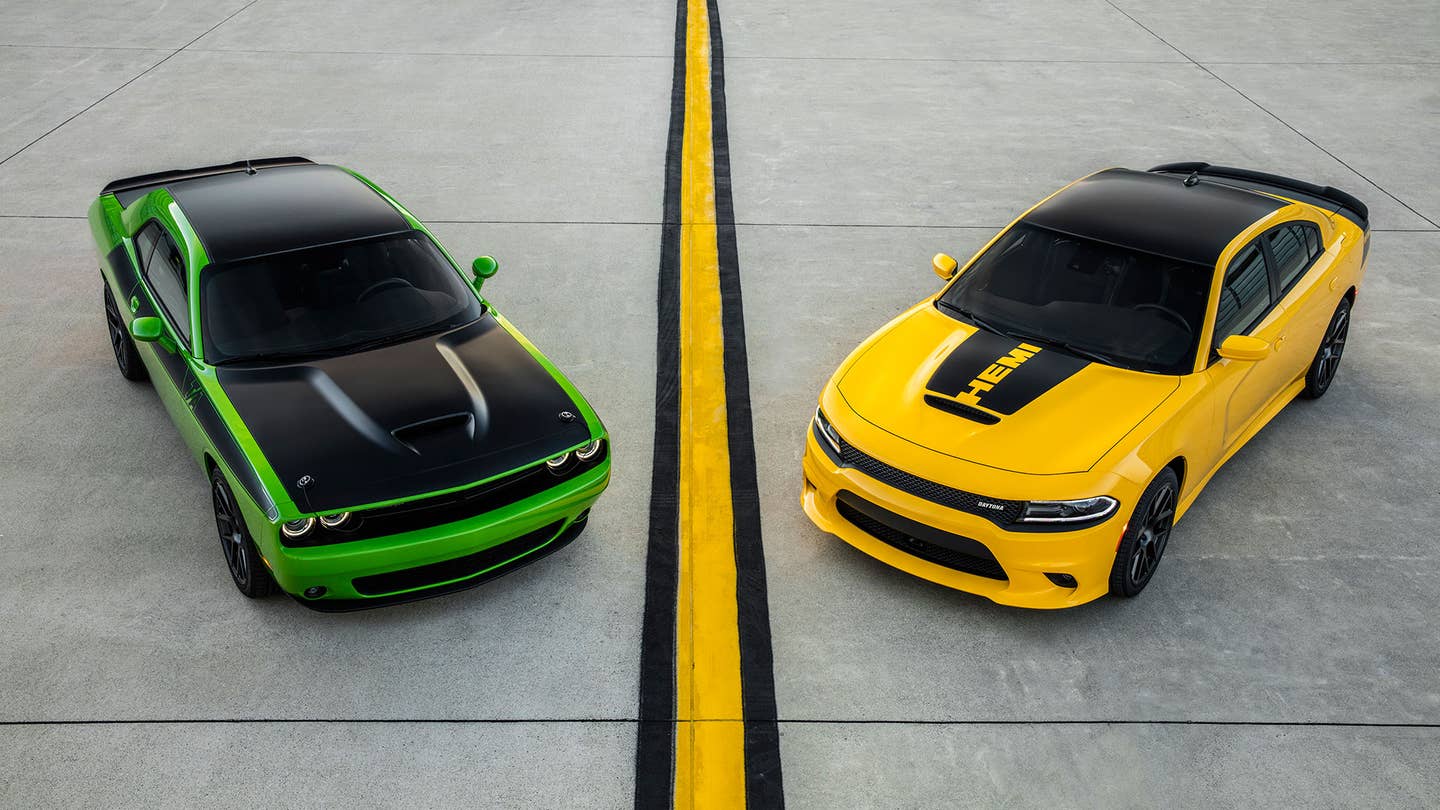 While the Dodge Challenger and Charger brothers are by far the oldest members of the current muscle car set, Fiat Chrysler has resorted to an lengthy series of facelifts, upgrades, and new trim levels to keep hem fresh. Case in point: the 2017 Dodge Challenger T/A and 2017 Dodge Charger Daytona, a pair of trims with old-school names designed to tack on both added performance and extra retro appeal.

On the Challenger front, all the T/A models add a NACA-ducted hood, the Hellcat's air box, LED headlamps that suck in fresh air, and a Mopar cold air induction system; they also come with a matte black hood, front fascia, roof, and side stripes, as well a fleet of special badges and minute trim changes. Buyers can even spec factory-installed hood pins for extra 1970s feel.

The T/A and T/A Plus also score an active performance exhaust system designed to give the cars a little more roar, as well as the Super Track Pack's lowered suspension, performance-oriented brake linings, and stickier Goodyear rubber. The Plus model differentiates itself by offering a nicer interior, including leather trim, an upgraded stereo, and a 8.4-inch touchscreen infotainment system, while the 392 model adds on all the go-fast bits from the SRT 392—the bigger engine, the high-performance Brembo brakes, and the 20x9.5-inch wheels clad in high-performance Pirellis.

On the Charger side, both models pick up the Mopar cold air setup, as well as a host of minor trim changes and design details, such as black leather-and-alcantara seats with Brazen Gold accent stitching. Like the Challenger T/A, the 5.7-liter Charger Daytona scores the Super Track Pack and its array of performance mods, as well as an SRT-inspired front fascia and NACA-ducted hood; top speed leaps from 135 to 150 miles per hour, thanks in part to a high-speed engine controller. The Daytona 392, like the Charger SRT 392, packs a limited-slip rear axle, Brembo brakes, and wider wheels and tires than its lesser brothers.

And of course, these are Fiat Chrysler special editions here, so the Chally T/A and Charger Daytona models come clad in their own distinctive colors. An all-new color named Green Go and the returning Mopar favorite of Yellow Jacket are exclusive to the T/A and Daytona cars; if you don't mind your car being confused with any of the other Dodges on the road, you can also choose from the full palette of 2017 Challenger and Charger colors, including such wonderfully-named shades as Destroyer Gray, Octane Red, White Knuckle, and Maximum Steel.

If you want the full breakdown on Dodge's newest muscle car additions, you can check out the company's press release here. Be warned: It is extremely comprehensive. Then again, if you're the sort who read this far in the article, we at The Drive bet you're interested enough to dig a little deeper.