Three months after Bruce Meyers passed away, we tackled the NORRA Mexican 1000 the way he would’ve wanted. 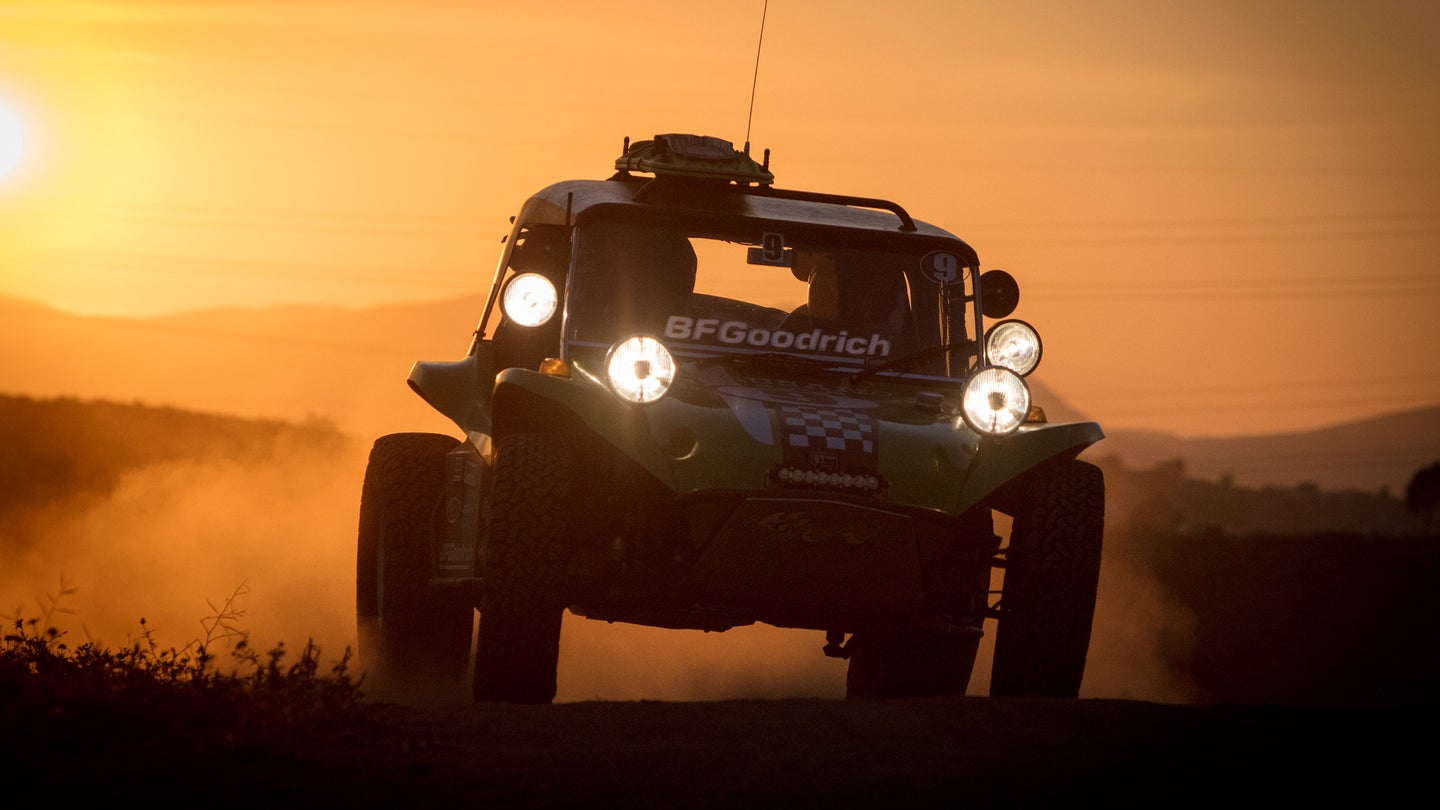 “It takes a couple of really dumb guys to race a Manx in Baja.” These were the words that went through my mind as the grey matter inside my skull shuddered like a bowl of Jell-O on a paint shaker. We’d hit a big whoop-de-doo, the tires left terra firma, and the front end landed hard. Our unlikely steed, El Gusano, which translates to The Worm in Spanish, didn’t flinch, sucking up the impact and taking it in stride.

I scrambled to find the next set of instructions in the roadbook and called out to Jon Steinhilber, “500 feet, hard left, drop-off on right.” He downshifted and threw the car into a picture-perfect drift.

It was Day 4 of the Yokohama NORRA Mexican 1000, and we were about 750 miles into an 1,140-mile contest of speed and endurance through Baja, Mexico’s, most rugged terrain. I’d been invited to join team El Gusano, Jon was the driver, and I would share the navigator seat with Joe Lowery. We weren’t the fastest car on the track, nor did we have the most capable suspension or powerful motor. However, the 1965 Meyers Manx buggy under our butts wasn’t unlikely at all. To really understand why two guys would race a Manx in Baja, we need to turn the pages back to 1967. The Manx was the car that started it all.

A pair of weathered wood doors swung open, exposing the azure waters of the Sea of Cortez lapping at a white-sand beach. Ted Mangels and Bruce Meyers stepped out from the La Perla Hotel, pulled open-face helmets over their ears, and climbed into a fiberglass Scooby Doo mobile. It was April 19, 1967, and their quest this day was to drive Meyers’ creation, a Volkswagen-based Manx dune buggy, from La Paz in Southern Baja, to the border town of Tijuana…and do it in the shortest possible time. The previous record to traverse this 1,000-mile stretch of treacherous boulder fields, bottomless silt beds, and endless arroyos stood at 39 hours, three minutes. Reliable maps were non-existent, fuel sources scarce, and they were on their own if things went sideways.

It was an era before paved roads, satellite phones, and GPS; the only means to officially document their start time was via a telegraph in Morse code.

The telegraph went out, Mangels and Meyers headed north, and set off for the adventure of a lifetime. Driving like a bat out of hell, they threaded their way through towering cardon cacti and tire-shredding cholla, over boulder fields and down endless sand beaches. When they arrived in Tijuana 35 grueling hours later, they had shredded the previous record.

Word of their accomplishment spread through the nascent off-road world like flames licking at chaparral. A few months later, future luminaries such as Dick Cepek, Car Craft’s John Cristy, Vik Hickey, Pete Condos, and Ed Pearlman met to discuss creating a new event. Pearlman and Condos each put $100 in the hat and formed the National Off Road Racing Association.

In November of 1967, 38 cars and motorcycles lined up at the bull fighting ring in Tijuana. There were Volkswagen bugs, Ford Broncos and a Ranchero piloted by legendary Ray Brock of Hot Rod magazine, an American Rambler, Saab, and a Triumph TR3.

The motorcycle class included the legendary J.N. Roberts and Malcolm Smith (think On Any Sunday), and there were top hats, tuxedos, and tails. In short, the lineup resembled the start of a jalopy gymkhana on prom night. There were few rules and no defined route—simply get your ass to La Paz as quick as possible while hitting five checkpoints. They headed south like an army of ants piling out of a nest, and in the mix were two of Meyers’ Manx buggies. When the dust settled in La Paz, it was the Manx of Ted Mangels and Vic Wilson that found the checkered flag first. The NORRA Mexican 1000, a rag-tag affair on a shoestring budget, was born.

Keeping up with the 21st century, NORRA has added classes for modern vehicles and even UTVs. But its core remains vintage iron and the cars that forged the future of off-road racing back in the 60s, 70s, and 80s. This year’s event included VW Beetles (Class 11), Ford Broncos (Pioneer 4x4), Sandco sand rails (Class 1600), a Porsche 911 (Stock Production Class), and the GoWesty VW Vanagon…in the RV Class, of course.

Back in the day, teams received a rudimentary map, a prayer, and maybe a Hail Mary. But today’s drivers have options; follow a GPS track, utilize a tulip-chart roadbook, or a combination of the two. The GPS track is a no-brainer, but it doesn’t identify hazards such as arroyos, bumps, jumps, cattle guards, and unseen cliffs. The wise man remembers an old racing proverb that states, “Drive what you can see.” Drive beyond your line-of-sight and you will eventually run out of talent—i.e., put your face in the dirt.

The deep-pocket teams might arrive a week in advance, pre-running the course and making their own notations, but not team El Gusano. When driving a low-horsepower, fiberglass-wrapped roll cage you must pair the roadbook and GPS, and only drive what you can see.

We’d clicked off 257 miles on the odometer and sucked down a bucket of silt before reaching the end of the stage—where a young lady handed us a couple of ice-cold cervezas, a long-standing NORRA tradition. The team gathered around for high-fives and an inspection of our trail fix from Day 3. We had sheared off a rear shock mount, which also doubled as a limiting strap and bump stop for the axle. The previous night was spent with our backsides to the dirt, grinder in one hand and welder in the other, but our temporary brace had failed.

While the Mex 1000 is the happiest race on earth, it is still a race. And when there are more than a thousand miles of desert between you and the checkered flag, it becomes a game of attrition. Cars were dropping like moths from a bug light, and we’d picked up a couple of spots in the overall standing. But if the shock mount failed again, the domino effect could jeopardize our entire race. We needed a proper fab shop.

Philmore, a rough-cut expat and VW afficionado, had escaped the rat race in the States and landed in San Felipe. This was our lucky day, as he was also one of Jon’s buddies and had a well-equipped garage. We pulled El Gusano in, put a jack under it, pulled out some steel tubing, and went to town effecting a repair that would have made Bruce Meyers proud.

While much of auto racing is pushed by the corporate world with high-profile drivers in mega-buck cars, NORRA is about independence and vintage iron. They have a class, or will create a class for just about anyone. Have a VW Vanagon or AMC Hornet? No worries, you’re in. No one is excluded from The Happiest Race on Earth. The deep-pocket factory teams are present, but many NORRA competitors stick to tradition; they either run solo or with a single chase vehicle. Chase teams play a game of leapfrog with their race cars, setting up at highway crossings and preparing for anything. A typical pitstop might include checking the suspension, drivetrain, and steering, torquing lug nuts, and a 10-100 (watering a cactus).

When I asked Jon, a habitual humorist, why he chose the Manx and if they had sponsors, he laughed and said, “Nope, sponsors sound like too much work. We race for the fun of racing.” As a kid he grew up kicking around Baja with his dad in buggies and Baja bugs. When he got involved with the Manx Club in the 90s he knew he wanted to do a vintage race. NORRA was the perfect venue, and a Manx was the perfect car.

He acquired El Gusano about five years ago, and after stripping off several coats of paint found the original lime green gel coat. As a guy who loves to make stuff, he built the motor and fabricated everything from the bumpers and skid plates, to the roll cage. While I would wager there were half-million-dollar vehicles on the track with us, Jon said, “It is pretty much a stock VW drivetrain and I’ll bet I don’t have $20,000 in this car,” and with a Cheshire cat grin, “…and that includes the purchase price.”

Continuing tradition, he made racing a family affair, his son and daughter joining him as navigators in past events. He and the El Gusano team have also competed in the Sonora Rally, Vegas to Reno, and Parker 425, landing first-in-class or podium finishes each time. Tipping back another coldy he added, “And hey, we completed every mile of every race.”

Thinking El Gusano had something to do with the last shot in a bottle of mezcal, my last question was why the heck he named his Manx after a worm? He said, “Bruce’s wife Winnie called the color inchworm green, but the translation was too long so we shortened it to El Gusano.”

NORRA ceased operation in 1973 and SCORE filled the gap with their race series. But in 2010, Ed Pearlman’s son Mike decided it was time to bring vintage iron back to the peninsula. It would be a multi-day rally for grass-roots drivers and classic cars. That year, 68 teams registered, showing up with iconic rides like the Snortin Nortins Nova, James Garner’s Oldsmobile 442 Banshee, and the Rippin’ Rooster `57 Chevy Bel Air.

The Covid pandemic put the brakes on a 2020 event, but this year NORRA was back in action. Working under strict guidelines, the event was scaled down from previous years. Rather than starting with an extravagant public exhibition in downtown Ensenada and ending with a grand awards ceremony replete with live music and fireworks, it was all about fun in the desert. While it has traditionally been a peninsula run to the tip (San Jose del Cabo), organizers were required to make it a loop race from Ensenada. There were masks, social distancing, and mandatory Covid testing, but NORRA was back—big kudos to their team for having the guts to make it happen.

We’d left Ensenada four days earlier and leapfrogged our way to Bahia de los Angeles and San Francisquito (mid-peninsula), and back to San Felipe. It was the final day, and with 211 miles between us and a checkered flag, we lined up and prayed to the deities of the desert that our makeshift repair would hold up.

Out of more than 100 cars that started, nearly 40 percent had experienced game-ending breakdowns or crashed, rendering a DNF (Did Not Finish) on their dance card. However, finishing is a bit ambiguous. We witnessed teams with blown motors or transmissions push their cars past the green flag on the last day to officially start the final stage and avoid a DNF. Hmmm?

When the dust settled back at Horsepower Ranch, this year’s HQ, our unlikely Manx had earned another podium finish, 2nd place in the three Pioneer divisions and 1st in Class in Pioneer Buggies. As I crawled into my tent that night I thought, “Not bad for a couple of dumb guys driving a 50-year-old, low-buck, fiberglass worm.” The Mexican 1000—it was, and still is the adventure of a lifetime.

Meyers was a legendary hot rodder, racer, surfer, artist, and war hero as well as inventor.