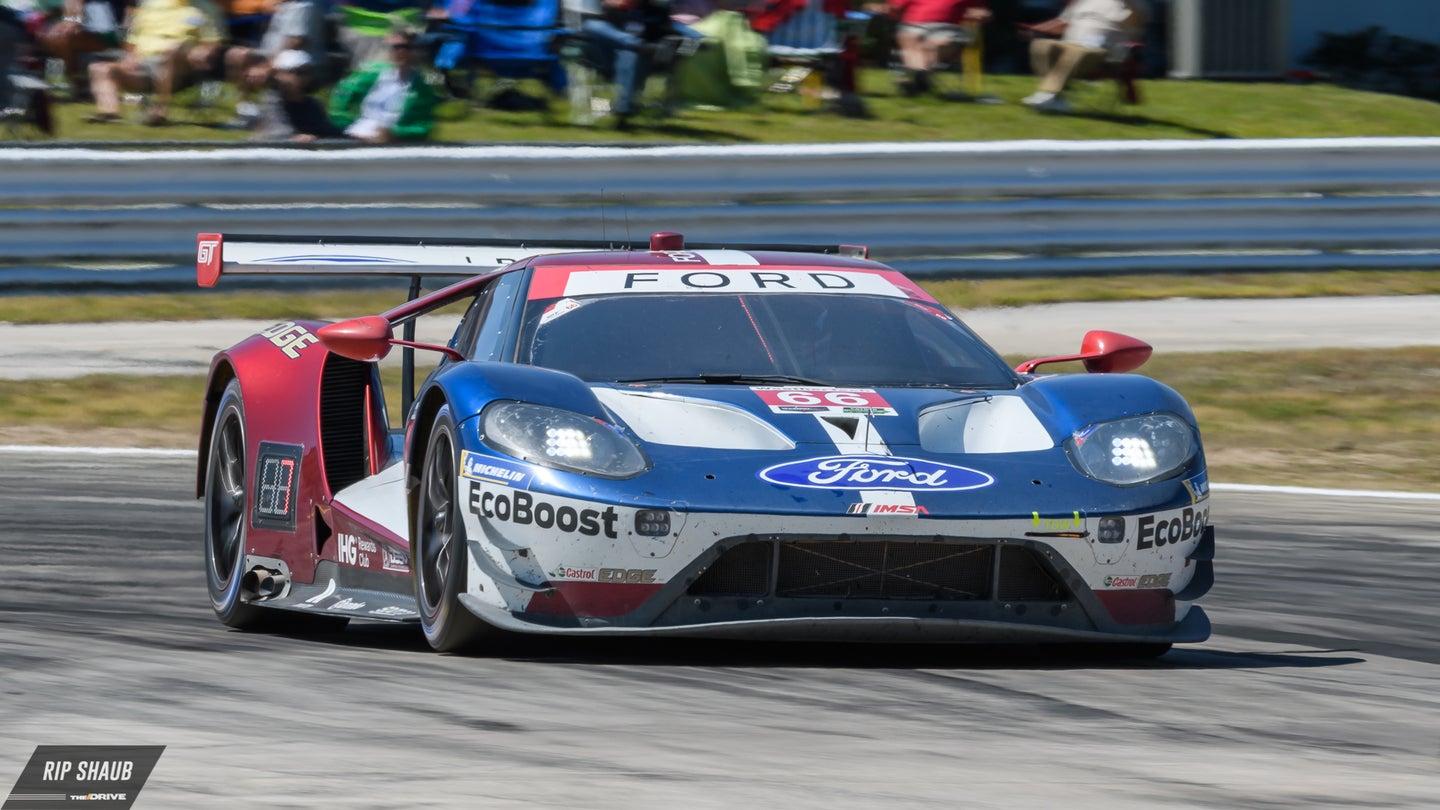 Saturday's GT-only IMSA round saw a fight at the top around the bullring Lime Rock Park circuit, eventually resulting in a win for the No. 66 Ford GT crew of Joey Hand and Dirk Mueller.

The race kicked off with the pole-sitting No. 3 Corvette Racing C7.R in the lead, building a gap over the Fords and Porsches in GT Le Mans. An early-race caution was flown for a collision in the GT Daytona class, allowing the BMW of John Edwards to work its way toward the front. Now, it was a four-manufacturer race for podium contention as Mueller, Porsche's Laurens Vanthoor, and Corvette's Antonio Garcia were battling it out.

Further back, Richard Westbrook continued pursuit in the No. 67 Ford GT in efforts to keep up with the leading Chip Ganassi Racing entry, though soon relinquishing those efforts before Lap 30 to focus on Tommy Milner in the No. 4 C7.R. This provided close racing in the midfield of GTLM as Patrick Pilet was also battling with Connor De Phillippi in the second BMW M8 GTE.

Leading up to the first pit cycle, Garcia was able to weave through traffic to gap Vanthoors' Porsche. Upon stopping, Jan Magnussen was swapped in behind the wheel of the No. 3 Corvette and Earl Bamber climbed into the P2 Porsche RSR.

Magnussen put on a performance similar to that of Garcia's as he was stalked by Bamber throughout the stint. Meanwhile, Hand was lurking behind while also dealing with the second Corvette which was now piloted by Oliver Gavin.

The hard-charging Corvette pitted from the lead on Lap 106 and was quickly followed by Bamber who made a mistake before reaching the second stop, running off course and costing the team crucial time as it looked to nail its strategy to leap ahead. Porsche was then hampered even more as faulty equipment made for an extended stop, dropping the No. 912 down in the order.

This is where Hand initiated his hunt as he passed the No. 911 Porsche for second place. Magnussen was 10 seconds clear of the field but Hand was rapidly gaining, cutting the lead in half before colliding with the Magnus Racing Audi R8 GT3. This was only a minor setback for the Ford, though, as he caught back up to Magnussen who was fighting through lapped traffic.

With just 15 minutes to go, Hand was racing Magnussen hard on the tail of his 'Vette. Constant pressure forced the Dane to defend his position, ultimately running wide in the final turn in the closing laps, allowing Hand the gap to pass and commandeer first place.

Conclusively, Hand would finish P1 with an 11.4-second gap on Magnussen who had been closed on by the Porsche of Bamber.

“I think today we capitalized on some opportunities, some guys made mistakes and we were right there to take advantage of it,” Hand said after the race. “Winning races is all about that, winning championships is all about winning races."

“I hope everybody enjoyed the race today," Hand continued. "This is one of those places where you get that feeling, you have such genuine fans here. You can see them on the hillside, it’s like a stadium race. It’s like a short track Saturday night. I think that’s what makes this WeatherTech series a show, and it has to be a show. That’s why we’re all paid to be here. I’ll tell you, when I get to race in the show and I get to win, that’s what makes it worth it.

Madison Snow and Bryan Sellers returned to form on Saturday to build a 10-point advantage in the GT Daytona championship standings over Katherine Legge.

Paul Miller Racing, who had its five-race podium streak snapped at Canadian Tire Motorsport Park two weeks ago, reclaimed the top step at Lime Rock ahead of Magnus Racing and Scuderia Corsa.

PMR got started early on as it tracked down the pole-sitter Patrick Long, driving for Wright Motorsport. Several teams were in the fight including the eventual podium finishers, Andy Lally and John Potter gaining their second consecutive top-three in the No. 48 Magnus Racing Audi.

The race-winning Lamborghini Huracan GT3 led the final 63 laps and, at race's end, six different manufacturers made up the top six spots.

“It was a great race,” said Snow. “Anytime you end up on the podium, it’s good, and when you win, it can’t get any better. Bryan gave me the car in a position where there was nobody around, so I just sat there and did laps. That’s a lot of pressure when you’re handed the car like that. You do everything you can to keep the car there and stay ahead. No matter how big of a gap you have to the people behind you, it’s never enough. You’re always nervous.”

Sellers built onto his teammate's statement by adding: “It’s so hard to find words in moments like this,. The wins don’t come often, so this is great. There isn’t a strong enough word to describe how today was. We had some issues early in the week, and the guys were able to fix it and get us moving to deliver a win to Paul in front of his home crowd at his home track."