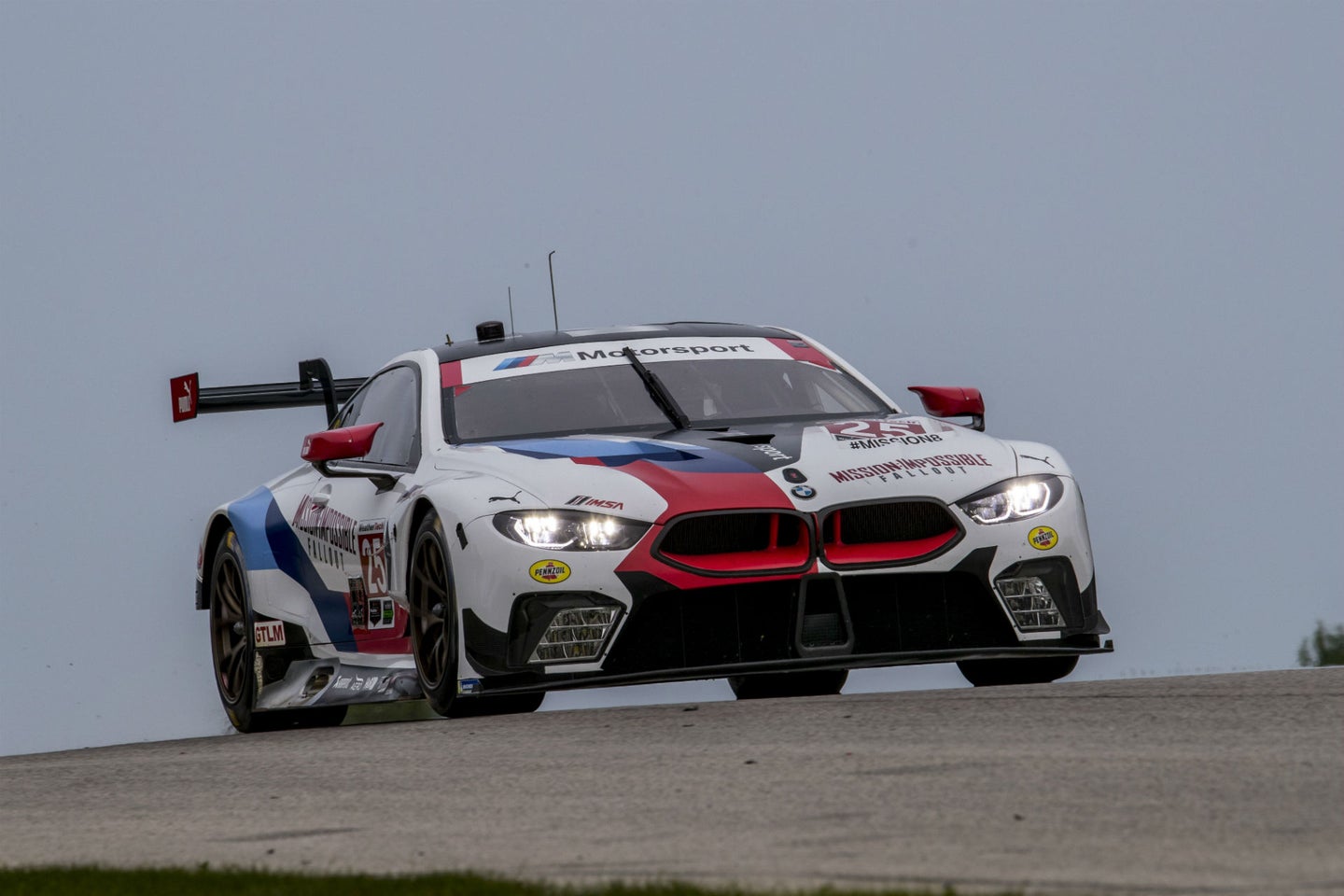 If you ask the crew at BMW Team RLL, they'll tell you that it's been a long time coming. On Sunday, the factory-backed outfit was able to claim its first IMSA win with BMW's M8 GTE machine, besting the field of Porsches and Corvettes while ending Ford Chip Ganassi Racing's winning streak at Virginia International Raceway.

Alexander Sims and Connor De Phillippi piloted the No. 25 BMW M8 GTE to victory after showing promising pace through the first half of the season, finally capitalizing on the outfit's winning potential. In the hunt to avenge its painful outing at Road America in early August, the duo nudged out the No. 3 Corvette C7.R of Jan Magnussen by 1.323 seconds at the checkered flag.

Stellar racecraft and consistency were what won the race for Sims in the closing minutes of the sprint event. A fuel-only stop with 24 minutes to go was enough to push the No. 25 car to the end and BMW Team RLL managed a double-podium with the sister M8 GTE entry grabbing P3 at the hands of Jesse Krohn and John Edwards.

By finishing second, Magnussen and his Corvette Racing teammate Antonio Garcia commandeered the GT Le Mans championship lead as Ryan Briscoe and Richard Westbrook suffered a DNF. A clutch issue forced the No. 67 Ford GT into the garage and the team surrendered valuable championship points with just two races remaining in the season as they head off to WeatherTech Raceway Laguna Seca in September.

Westbrook held the lead from pole early on while rival team Porsche also made its way to the front with Nick Tandy piloting the No. 911 RSR. The latter retired due to an engine failure in the opening hour and resultantly finished last in the eight-deep GTLM field.

The pro-am GT Daytona class upheld its reputation for tight battles and epic finishes at VIR with the No. 14 Lexus RC F GT3 eventually claiming victory. Dominik Baumann and co-driver Kyle Marcelli continued 3GT Racing's success in 2018 by beating out Road America-winner Wright Motorsports, who finished second with Patrick Long and Christina Nielsen behind the wheel.

A series of lead changes in the final 30 minutes saw several drivers take the lead including Magnus Racing's Andy Lally and Mercedes-AMG Team Riley Motorsports' Jeroen Bleekemolen. The two traded spots as they upped the ante late in the race while Meyer Shank Racing's No. 86 Acura NSX GT3 lurked in the background. Shank's Mario Farnbacher and Katherine Legge claimed the final spot on the podium, awarding Legge crucial points in her solo attempt at the GTD title.

Lally and Bleekemolen's battle made way for Baumann to squeeze by and charge to victory, earning his team yet another "W" in the hard-fought GTD class.

“It was not an easy race,” Marcelli said after the race. “Dominik did a heck of a job to do a double stint at the end. Huge effort by him. The first win is always the most difficult to get, so [to also get the second] is great. Thanks to everyone at Lexus and 3GT. This has been a great day.”