The series heads to the beautiful sweeping landscape of Elkhart Lake, Wisconsin for the ninth round of the WeatherTech Championship season. 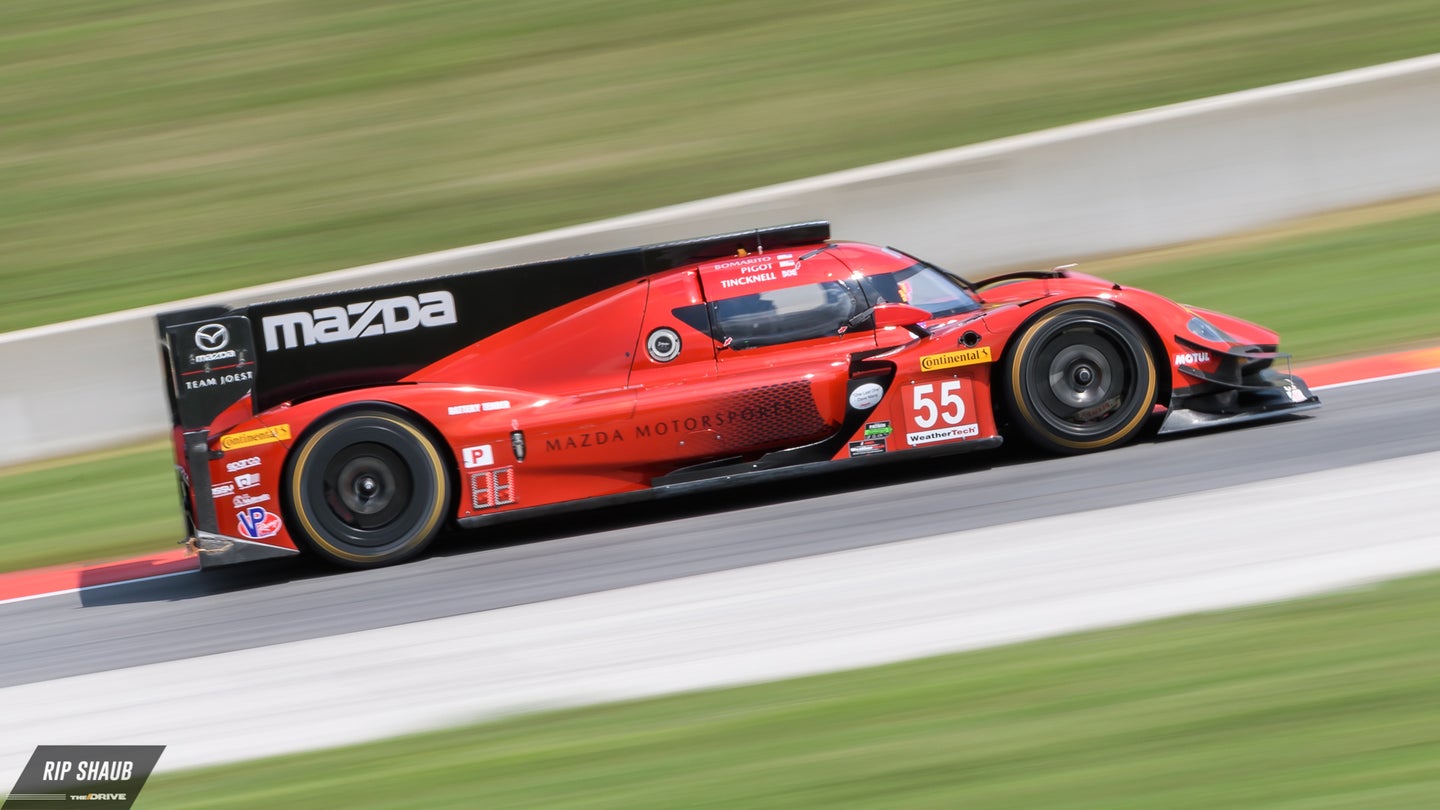 Sportscars will fill the wooded-hills of Elkhart Lake, Wisconsin this weekend during IMSA's annual visit to the 4.048-mile Road America circuit. The scenic track provides arguably the best backdrop and fan experience of the year, and for many, Sunday's race could be the peak for what has been a tightly-contested season in the organization's premier series. All three classes will compete in the WeatherTech Championship contest, packing the lengthiest track on the calendar with 33 entries from front to back.

Going into this, the ninth round of the current IMSA campaign, there are a handful of storylines to watch out for once the green flag waves for Sunday's 2:30 p.m. EST race start. Drivers with prior success at the circuit, teams who've been dominant as of late, and those looking to narrow the gap in the championship standings will all be involved in the multi-class battle as the 2018 season has moved beyond its halfway point.

As you may have heard, Mazda is going all-in on sportscar racing. The manufacturer's decision to pull out of the open-wheel Road to Indy program after 2018 is believed to be a positive move for its partnership with the historically-successful Team Joest, and this weekend at Road America will be its first IMSA outing since the move was announced. In turn, Mazda Motorsports Director John Doonan will be there in support of the Prototype team with his mind on nabbing the outfit's first-ever victory as a unit.

“When we first launched the program a year ago, our goal was to show up and win races," Doonan asserted in an interview with The Drive. "We’re going [to Road America] with really high hopes this weekend and we’ve knocked on the door with a podium [at Mid-Ohio].”

Competitors like both Team Action Express entries will prove tough to topple, especially with Joao Barbosa rejoining Mustang Sampling Racing after missing the last two races with an injured wrist. Meanwhile, AXR's Whelen Engineering-backed No. 31 Cadillac DPi will shoot to expand its one-point lead in the overall championship standings with Felipe Nasr and Eric Curran strapping in to compete at Elkhart Lake.

The DPi field has also received a bump in power for the upcoming event in hopes of balancing the competition with the global P2 cars which have won the last two races.

Chip Ganassi Racing has been nothing if not consistent in 2018. A dominant outing at the season-opening Rolex 24 foreshadowed further success at July's Six Hours of the Glen, compounded by another win at Mosport, then its most recent victory at the GT-only Lime Rock contest. Teammates Joey Hand and Dirk Mueller are banking on more in the No. 66 Ford GT entry as they are coming in with high spirits after making a heroic late-race pass on Corvette Racing's Jan Magnussen to win the Northeast Grand Prix.

“It’s my favorite track in the whole world,” Hand said of Road America. “It’s just a track that is a fun lap to drive. Sometimes you go to tracks and you test and you practice and it can get kind of dull, but that place never gets dull. It’s always fun to start up the front stretch and do another one.”

The duo has been on pole and won at Road America the past two years, adding even more confidence to their tear as of late.

“The whole team for Ford Chip Ganassi Racing, we are having an extremely good year,” Mueller added. “Especially the (No.) 66, finishing third in Le Mans and at the same time the two wins. We finished second in Daytona and were leading most of the race there."

Mueller continued, “We have to say, it’s looking really great for both cars, 67 and 66. So, 67 is only a few points down. They have won, also, two races this year. It looks like we’ve stepped up the game. Ford Chip Ganassi Racing, they have so many smart brains. They never stop working.”

Hand called the GT Le Mans championship hunt a "dogfight" as the top five competitors are all within arm's reach of the lead.

Corvette and Porsche are carefully calculating their respective returns to the winners' circle while BMW Team RLL looks to tame its still-tricky M8 GTLM twins. The latter has proven strong in qualifying, something that it will hope to replicate this Saturday.

The Magnus Racing duo of road course ace Andy Lally and team owner/driver John Potter is back at Road America. Touting several major sportscar victories as a team including a pair of Daytona 24 Hour wins as well as a class title at Sebring in 2014, the team behind the wheel of the No. 44 Audi R8 LMS hasn't lost its speed. Lally and Potter topped the timesheets at the end of Free Practice 1 on Friday, putting a leg up on the stalwart Lexuses and Lamborghinis in GTD.

Lally has multiple wins in various series at Road America, showing his expertise around the 14-turn track. He and Potter will be tasked with trumping the full-time entries of 3GT Racing and the No. 48 Paul Miller Huracan which currently tops the class championship standings.

Additionally, the No. 33 Mercedes-AMG team of Ben Keating and Jeroen Bleekemolen shouldn't be discounted given the latter's five career Road America wins. A big-time crash in FP1 may hinder the Bill Riley-led squad, depending on its decision of whether or not to run its backup car for Sunday's race.

In all, the competitive pro-am field should provide close intra-class racing as traffic shouldn't be much of an issue at the four-mile track.

With Mazda shifting away from open-wheel racers and into sportscars, brand Motorsport Director John Doonan drops hints at what’s to come.

Tequila Patrón to Withdraw from Motorsports After 2018

The spirits company has served in several sponsorship roles for the past 13 years.