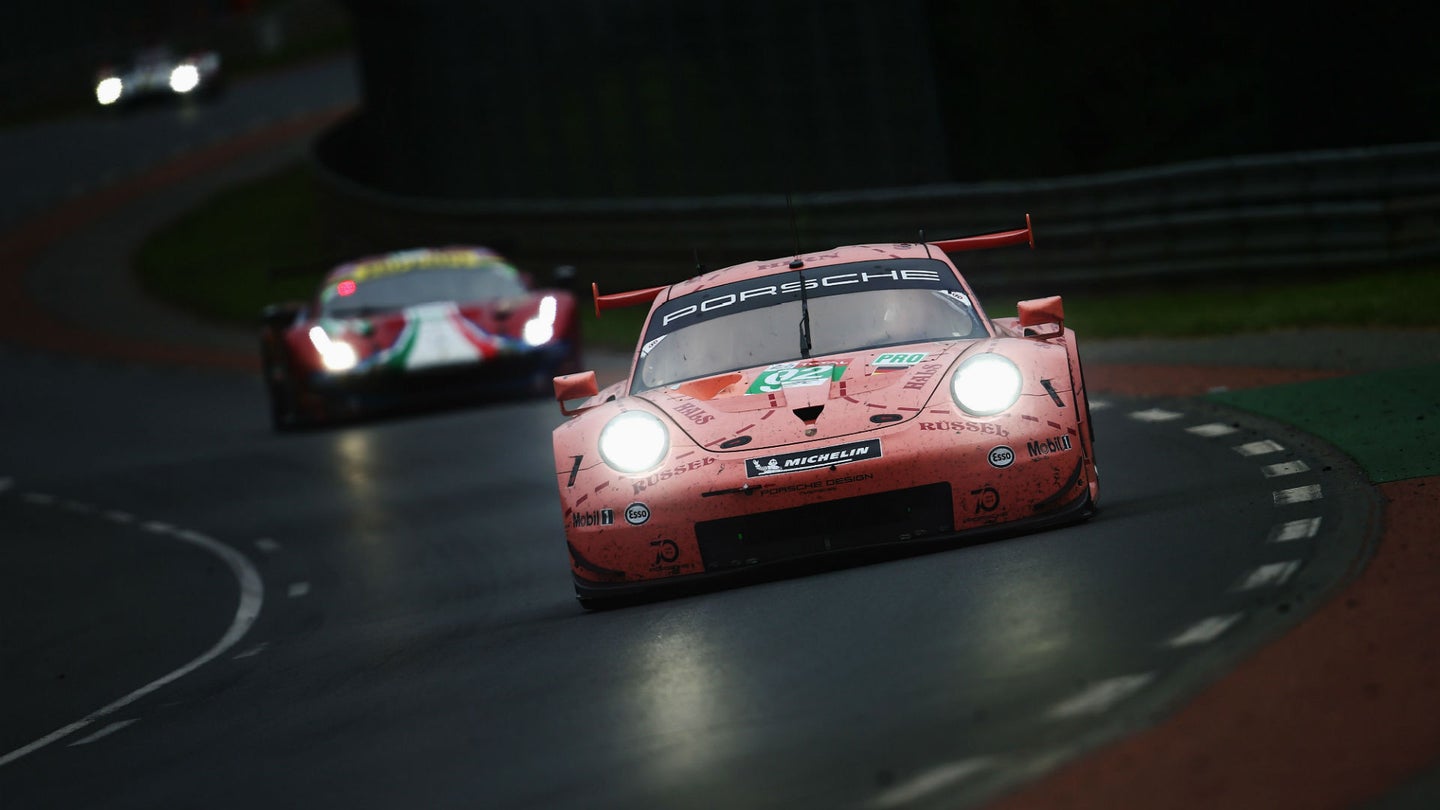 Manthey Porsche led every lap of the 2018 Le Mans 24 Hours with its No. 91 Porsche 911 RSR entry starting on pole and the No. 92 "Pink Pig" car taking eventual class victory in GTE-Pro.

The team's two retro-liveried machines showed the pace all week in practice and in qualifying ahead of the race. First off, it was Gianmarina Bruni in the No. 91 that wowed the field as he set a lap record around la Sarthe on Wednesday to gain provisional pole which would then become a reality for Saturday's race start. His crew then held the lead until the fourth hour in which the No. 92 RSR took over the top spot and commandeered it until the checkered flag on Sunday morning.

Manthey's driver lineup of Michael Christensen, Laurens Vanthoor, and Kevin Estre piloted the No. 91 to victory with the latter of those three taking the walk-off lead in the relatively early stages during hour four.

The "Pink Pig" RSR played its strategy right come nightfall and found itself at a massive advantage over the rest of the field as a yellow-flag period saw others pit, only to be held up by a red light at the end of the lane. This resulted in the No. 68 Ford GT falling back and suffering a crucial wait while both Porsches ran rapidly at the front of the field.

Estre was driving during this stint and was able to work up a two-minute lead over the main group.

Fred Mackowiecki trailed behind in the second-place 911 and was eventually challenged yet again by the No. 68 Ford of Sebastien Bourdais which became an especially heated battle. The two were fighting for the runner-up position and Mackowiecki stuck his elbows out as they approached the Porsche Curves, forcing Bourdais to the run-off and raising an issue to race control. The move was decisively ruled as legal and the No. 91 Manthey Porsche held its position.

Dirk Mueller, Bourdais' teammate, ran up to the front once again but conclusively finished two-minutes off of the pair in third.

Fellow Chip Ganassi Racing entry, the No. 67 car driven by Andy Priaulx, Harry Ticnknell, and Tony Kanaan, ended the race in fourth after a sixth-hour penalty put it far behind the class front-runners.

Corvette Racing's top-finishing No. 63 C7.R of Jan Magnussen, Antonio Garcia, and Mike Rockenfeller completed the twice-around-the-clock event in fifth, one lap down from the leaders. The team's second entry retired during the 20th hour due to suspension issues.

The No. 52 AF Corse Ferrari 488 GTE ended sixth, two laps down on the race leader but besting the efforts of every BMW and Aston Martin entered.

While BMW MTEK competed in the same sectors with race leaders during the early hours of the night, problems knocked them off the pace and both all-new M8 GTE racers were forced out before the checkered flag waved.

Aston Martin dealt with the growing pains of its freshly-released Vantage AMR, never having a genuine run at the podium throughout the 24 hours.

24 Hours of Le Mans at Halfway Point: Alonso Chases Down Leading No. 7 Toyota

The No. 7 Toyota TS050 Hybrid of Mike Conway, Kamui Kobayashi, and Jose Maria Lopez leads with 12 hours to go.