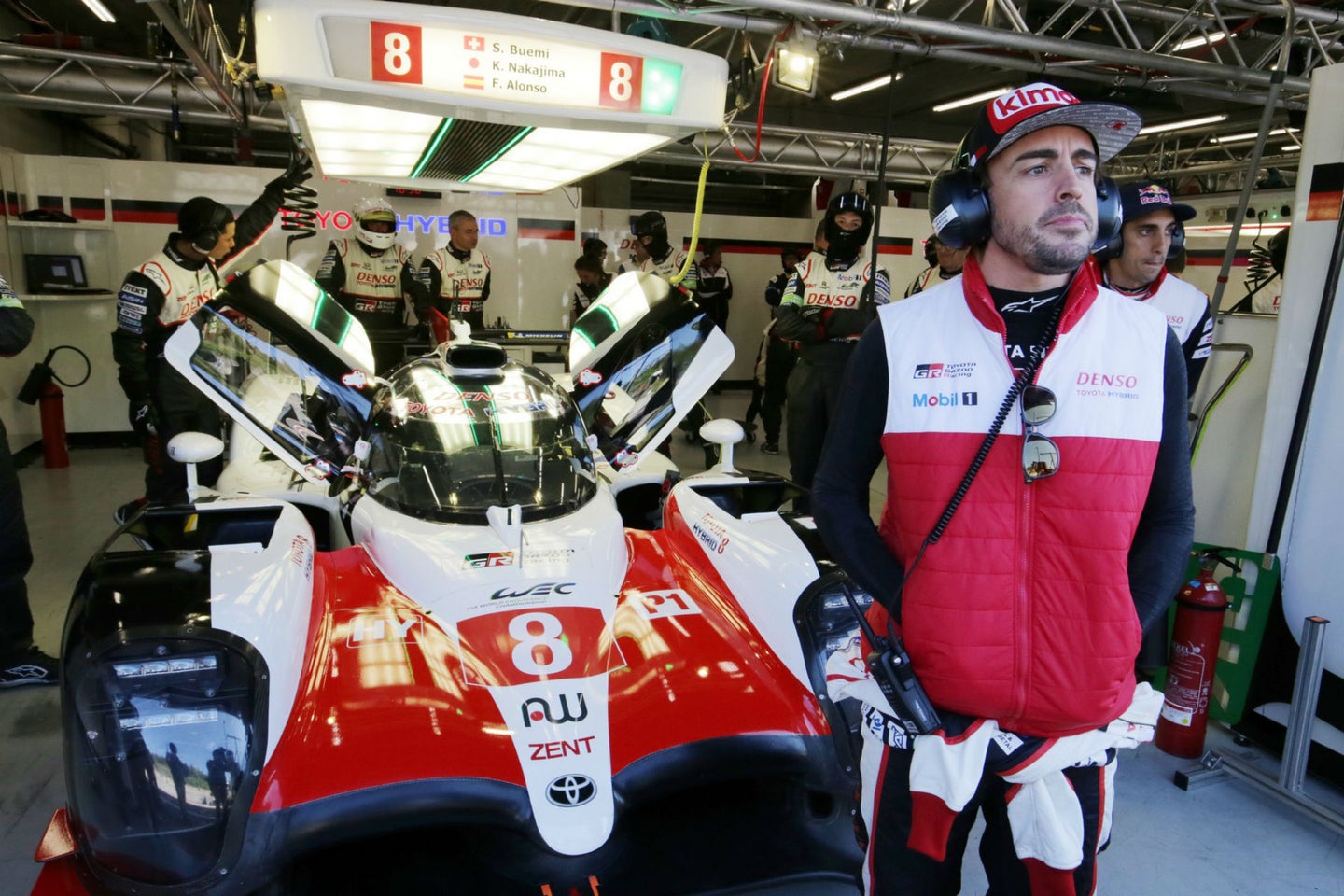 Friday's qualifying round at Spa-Francorchamps in Belgium brought about turmoil and initial success for a handful of teams in each category with Toyota and Ford starting on pole in their respective premier classes. However, in LMP1, the Japanese manufacturer will also face the tribulation of starting from pit lane despite clocking the fastest overall time due to a costly parts penalty. Both the No. 67 and 66 Ford GTs will start on the GTE-Pro front row, narrowly managing the one-two grid advantage over Porsche who will start third and fourth.

Despite Mike Conway and Kamui Kobayashi notching the fastest lap on Friday in the No. 7 Toyota TS050 Hybrid, Fernando Alonso and his teammates Sebastien Buemi and Kazuki Nakajima will start on pole at this weekend's Total Six Hours of Spa. An incorrectly stated identification number for the No. 7's fuel flow meter subsequently excluded it from qualifying and it will now be forced to start from pit lane, but only after the final car has completed the opening lap.

Alonso and Buemi's time was decisively slower than Conway and Kobayashi's with a 0.379-second gap between the two squads at the Belgian circuit. Disappointed with the mistake that cost the team a front-row sweep, Toyota released the following announcement after qualifying concluded:

"An incorrect identification number for the car's fuel flow meter was declared for the #7 prior to qualifying. This subsequently emerged during post-qualifying scrutineering. As a result, the car will start from the pit lane, one lap behind the field."

The statement continued, "The team accepts full responsibility for the error, which had no impact whatsoever on car performance. The fuel flow meter which was used in the #7 was fully homologated and calibrated."

"Team processes and procedures will be strengthened immediately to avoid any repeat of this unfortunate error."

This places Alonso and the rest of the No. 8 Toyota crew in prime position for the Spaniard's World Endurance Championship debut. They will start ahead of the two Rebellion Racing privateer LMP1 entries who qualified 1.842 and 2.409 seconds behind the Toyota hybrids.

This places Alonso and the rest of the No. 8 Toyota crew in prime position for the Spaniard's World Endurance Championship debut. They will start ahead of the two Rebellion Racing privateer LMP1 entries who qualified 1.842 and 2.409 seconds behind the Toyota hybrids.

Harry Tincknell and Andy Priaulx barely beat out their Chip Ganassi Team UK stablemates Olivier Pla and Stefan Muecke for pole position in GTE-Pro for Saturday's race. The British duo's best two-way average time of 2:12.947 was only 0.083-seconds ahead of the No. 66 Ford GT, and as a result, they will both start on the front row ahead of Porsche's 911 RSR twins.

Gianmarina Bruni will make his Porsche WEC debut at Spa in third place with fellow team member Richard Lietz ahead of Michael Christensen and Kevin Estre with the latter two driving the Stuttgart manufacturer's No. 92 entry. The fastest of the two, the No. 91, cleared a 2:13.065 time to distance itself by 0.318 seconds from its sister entry

BMW Team MTEK's M8 GTE qualified in fifth position where it will start its first WEC race ever, and it will promptly be followed by two AF Corse Ferrari 488 GTE Evos in sixth and seventh place. The best of the new Aston Martin Vantage racers will then start in eighth.