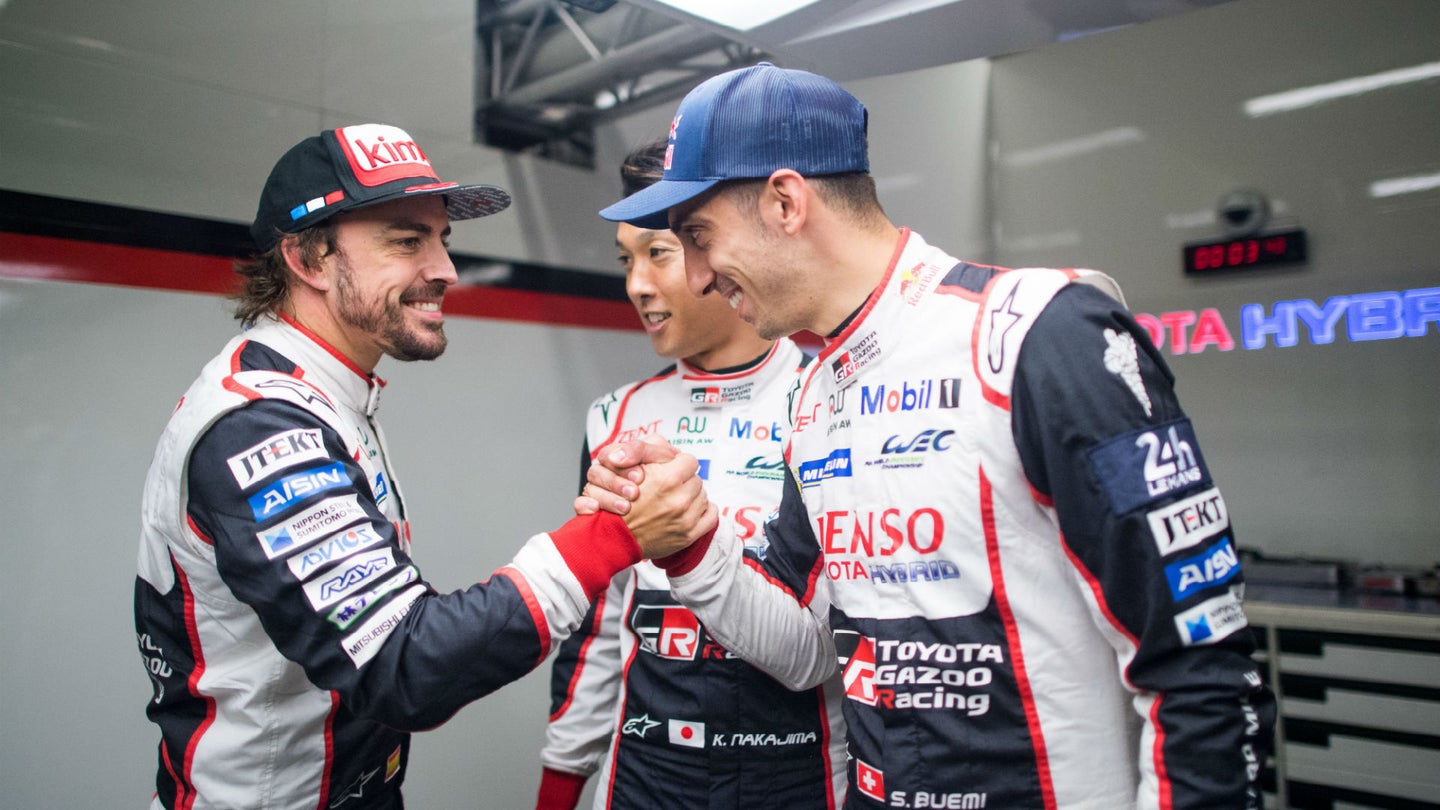 Qualifying for the 2018 24 Hours of Le Mans was headlined by the No. 8 Toyota TS050 Hybrid which will start this year's running of the race from overall pole.

The team of Fernando Alonso, Sebastien Buemi, and Kazuki Nakajima have consistently had the fastest car in the week leading up to Le Mans, and as Nakajima's best quali time of 3:15.377 showed, they have the pace over the others in the LMP1 field. They will be accompanied on the front row by their fellow Toyota entry, the No. 7 car, piloted by Mike Conway, Kamui Kobayashi, and Jose Maria Lopez.

"It was a nice run without any traffic, and the car was very good,” Nakajima told Radio Le Mans after Thursday's session. “I’m quite happy with the result, but more importantly the car was good. We did a lot of progression for the race. We feel ready.”

In Le Mans' most competitive class, LMP2, IDEC Sport was able to trump the 19 other entries in its Oreca 07 Gibson through way of technicality. Frenchman Paul-Loup Chatin managed pole with a 3:24.842 in the No. 48 car, which was actually slower than the best lap from TDS Racing. While TDS' Loic Duval rounded la Sarthe in 3:24.816, the team was penalized for not stopping for the scrutineering light. As a result, P1 was surrendered to IDEC and TDS will start in fourth.

Dragonspeed Racing will also begin from the front row with its No. 31 Oreca. The TDS-run G-Force Oreca will follow shortly behind in P3, rounding out an all-Oreca top-four.

Porsche to Start From P1 in GTE-Pro

Porsche's factory squad kept up its speed advantage with newly-acquired driver Gianmarina Bruni nabbing a lap record on the way to claiming pole in GTE-Pro. Driving the manufacturer's No. 91 Rothmans-liveried 911 RSR, Bruni's 3:47.504 from Wednesday stood through Thursday's round and beat the second-place No. 92 Porsche by over 1.5-seconds. Ford Chip Ganassi Team UK's No. 66 Ford GT will start from third beside AF Corse's No. 51 Ferrari 488 GTE Evo.

"Gianmaria Bruni pulled out all stops and put in a perfect lap right at the start," said Pascal Zurlinden, director of GT factory motorsport. "We knew that this could only happen at the beginning of the session because that’s when the traffic is lightest.”

These three manufacturers in the top four leaped ahead of the rest of the field as Corvette Racing, the best-running team from row three on, was 2.5-seconds off the pace. BMW MTEK struggled with its pair of all-new M8 GTE racers, and further down the list, Aston Martin had obvious signs of troubles with its also-new Vantage AMR.

The No. 88 Porsche 911 RSR of Dempsey-Proton Racing will start from pole in the car's first year in GTE-Am, setting a time that was faster than some GTE-Pro cars. A quickest lap of 3:50.728 was enough to squeeze ahead of Gulf Racing's No. 86 entry of the same make and model, followed by the second Dempsey-Proton car.

Spirit of Race and the No. 54 Ferrari F488 GTE broke up the Porsche party and went third-fastest at the end of qualifying. Project 1's Porsche 911 RSR slotted just below them and will race from fourth.

Need help keeping the 60-car field straight? Don’t worry; so does everyone else.