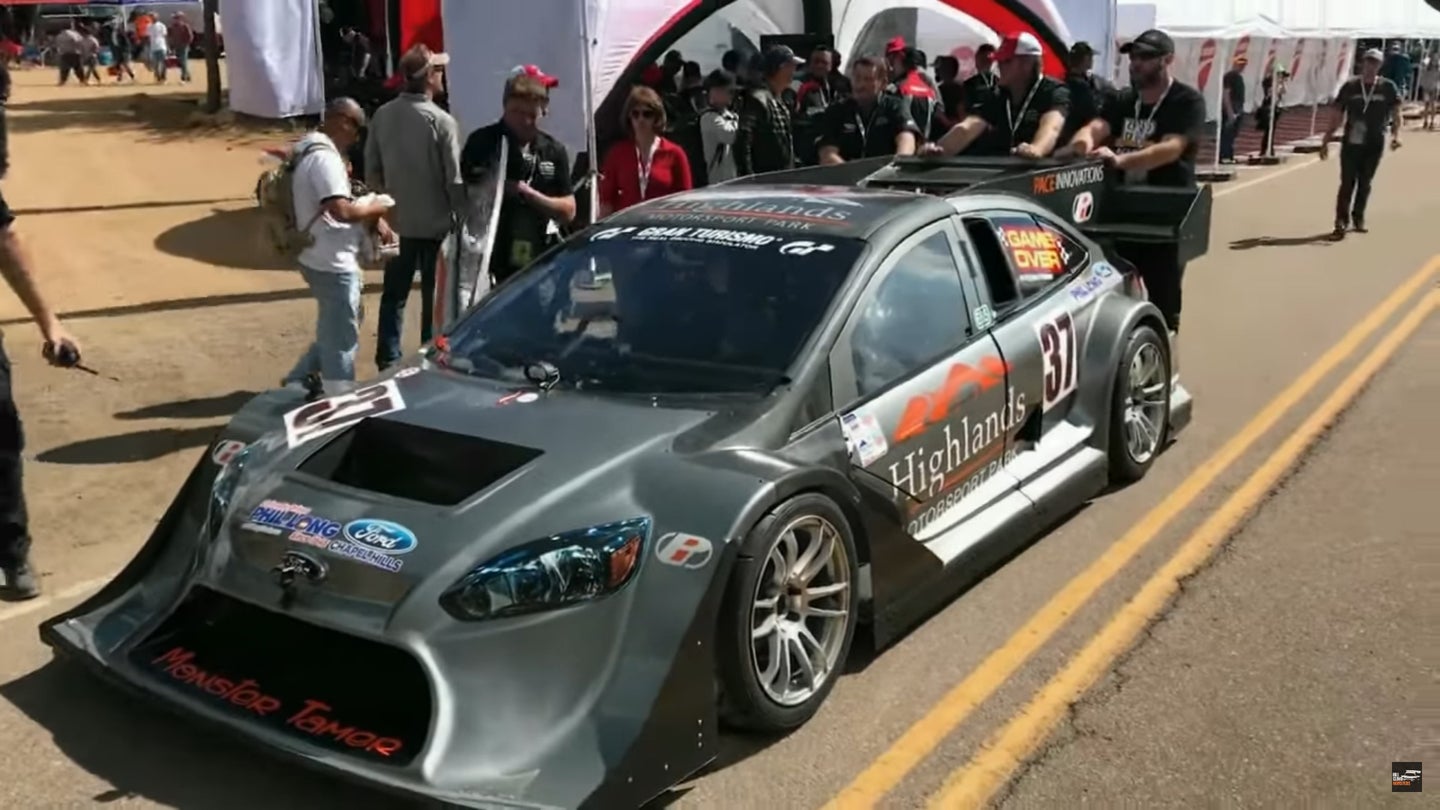 After thinking it through, I'm not certain we can call this a Ford Focus anymore. I mean, sure it started off life that way and still could technically be titled as such (if it were suitable for the road). The A and B pillars have kept their production form, and the resemblance of the original structure is still there. But everything else on this car has been custom fitted to meet its new heart - that of a R35 Nissan GT-R.

This car is owned by an Aussia by the name of Tony Quinn and was built by local motorsports shop PACE Innovations. Its purpose in life is climb hills, originally off-road, but things change and it became a tarmac monster. Every bit of this Focus was built with its intended purpose in mind; from tip to tire, this is first and foremost a race car.

Originally, Quinn wanted to fit a 5.0-liter Ford Coyote V8 into the car, but because it couldn't fit well, he decided to go with another option - the heart of a GT-R. Nissan's VR38DETT was found in the R35 GT-R starting in 2007. It's undergone some major treatment that has upped its power from 591 horsepower up to around 850 horsepower. PACE achieved this by adding larger Garrett turbos coupled with standalone engine management tuned for E85, and a whole lot more. For a 2,200 lb car with 53/47 weight distribution, the power is likely more than enough to propel it much quicker than you or I have gone 0-60 mph.

The real attention grabber is the technology that has gone into this car to make it perform as anticipated. One example of this is its ability to self-correct the tune based on environmental variables. Since Pikes Peak is a high altitude hill climb, the engine will lose power as air becomes thinner above sea level. A barometric pressure sensor works in conjunction with a speed sensor built into each turbo. These pairs of sensor work together to increase the boost pressure so that the air-fuel ratio will accommodate for the thinner air.

The car puts the power to the ground via a Holinger MFT 6-speed sequential dog box transmission. More cool tech comes into play here, as the car becomes completely clutchless once the in motion thanks to the Motec M150 ECU. When the driver uses steering mounted paddles to request an up or downshift, the ECU will perform a no-lift-shift ignition cut, allowing the dog gears to mesh together and perform a seamless shift in 40-60 milliseconds. If for some reason the shift fails, the ECU will realize what happened and attempt to self-correct the shift. The car also retains a synchronized down shift rev-matching functionality, just like the GT-R and 370z. So when the driver requests a downshift, the car automatically matches the engine speed to the correct rev for the gear.

The car's bodywork is also extremely impressive. Aside from transforming a Ford Focus into this powerhouse, it also ensures that each choice of the car's body line affects how air is moved around the platform. For example, after the turbos do their thing, they feed to dual rear-mounted intercoolers, ducted into the bodywork. The brakes, which originally come from a GP2 (Formula One's less powerful brother) car, are cooled through a similar fashion. The entire goal, however, is to maximize downforce. This includes a rear spoiler and large under-car tunnel which generates 2,200 lbs of downforce at 125 mph, which, according to the narrator of the video below, is enough to theoretically drive the car upside down.

Even though this is a pro-level build, I can't wrap my head around how insane it would be to know this was once a car my mother could be driving. The impressive technology and well though-out engineering that went into this build make up for one fun looking and well performing vehicle.

This man won’t sell his rare Skyline for all the tea in China—er, Africa.