Lack of sight hasn't stopped the 73-year-old Jones from becoming a master of his craft. 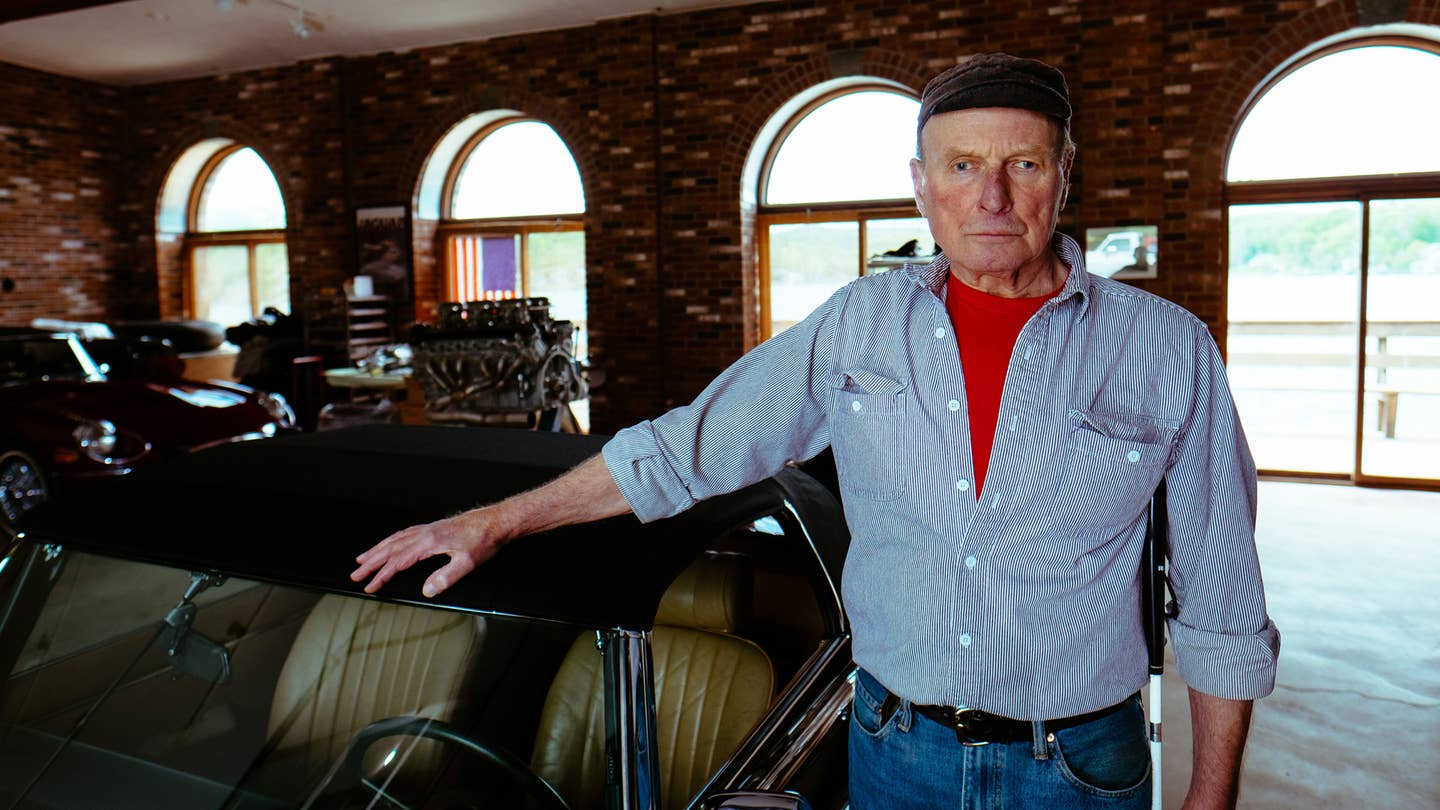 Through the garage bay windows of a remodeled refrigeration plant in bucolic Highland Lake in Winsted, CT, I see a man from the back, deep in thought. He seems to be admiring the sheet metal of the immaculate Jaguar E-Type in front of him, but I know better. Because Stewart Jones of Stew Jones Restorations is completely blind.

Though a cruel twist of fate took his eyesight in an automobile accident, leaving Jones unable to see the perfect specimens of Jaguars he and his crew create, his memory constantly serves him the blueprints for the British iron on which he works. In particular, the Jaguar E-Type Series III V12s that are his specialty.

“I can tell a lot about a car by touching," Jones says. "Everything except color. I can listen to it, feel the engine, blip the throttle—feel it running and find out if it’s a bad cylinder or a thrown rod. I can’t remember if I’ve seen some cars, but in my mind, I can picture the car.”

Jones has a 6,000 sq.-ft workshop, as well as a 2,000 sq.-ft warehouse in a nearby town that serves as parts storage. As we walk around his showroom and talk shop, Jones points to various cars and talks about their nuances as though he’s staring right at them. What’s particularly amazing is Jones’s ability to recall the minutiae of these vehicles; he remarks on a slight sticker deviation between 1973 and 1974 models, where the outline is red versus black, as a technician and I stare into the clean-as-a-whistle engine bay of a ’74.

We walk by an Accudraft paint booth that Jones boasts recycles fresh air every 20 seconds. Jones fires it up to send the point home. It’s as if he rehearsed this to brag, but as he continues talking about firing order adjustments and tappet clearances, you can sense his mind is obsessively in tune with the specific traits of these Jaguars—his creations—and by making them better in his own way.

In this industry, finding true, unadulterated inspiration is hard to come by. The beauty of this specialty shop in Northwest Connecticut is not just the challenges overcome by an owner whose namesake is on the building, but by the perfect examples of Jaguars they meticulously bring back.

The 73-year-old Jones does love to brag, though—and for good reason. He and his crew (whom he praises at every chance) have rebuilt cars that the Jaguar Club North America rate as perfect, 100-point cars—a first for an E-Type V12, Jones points out (though he opines that "the ’74 has the big rubber bumpers, which are kind of ugly," whispering so as not to disturb any potential customers walking around the next corner).

“Some of the cars here we modify, and you’ve got a blind man designing cars,” Jones admits. “Well, I know what the cars look like because I was fully sighted until I was 42, and just touching them I can tell the shape and everything else.”

To find faults, Jones feels the small body contours, the welds, and the pores in the paint. As of Jones’s last count, they’ve developed at least 50 specialized and proprietary tools, jigs, stands, mounts, harnesses, and speedo cables to make things easier during restoration.

Stew Jones Restorations has moved on from the typical, top-to-bottom restorations for now, choosing instead to focus on more custom work, like upgrading their “Beast,” a soon-to-be 650-horsepower, 450 cubic-inch, 7.3-liter race car that his wife, Karen, will pilot again. She’s already won numerous slalom challenges and broken records with this ’72 built by her husband.

Jones is now modifying Jaguars the way he believes they should have been made originally—the way Jaguar could never have built them at the time due to the regulations of the era. His team cleans up taillights, gets rid of chrome around the grille, and remove the bumpers. “They got compromised along the way and went away from what Jaguar wanted,” Jones says.

He demonstrates this by showing me the rubber gaskets they use to clean up the lines between body and bumper; an eighth of an inch difference to you and me, but a world to him. Bonnets are refinished to roll the louvres ever so slightly, so as to not disturb the rounded lines of the car. You'll probably never notice, but Jones does.

Jones was once accused of having a sick mind, but it was entirely meant as a compliment, a comment on his obsessive pursuit of perfection. You can tell Jones loves putting on a show—possibly even bragging a little—because, even though he can’t see, everyone else can.