The car allegedly also hit a roadside barrier during filming. 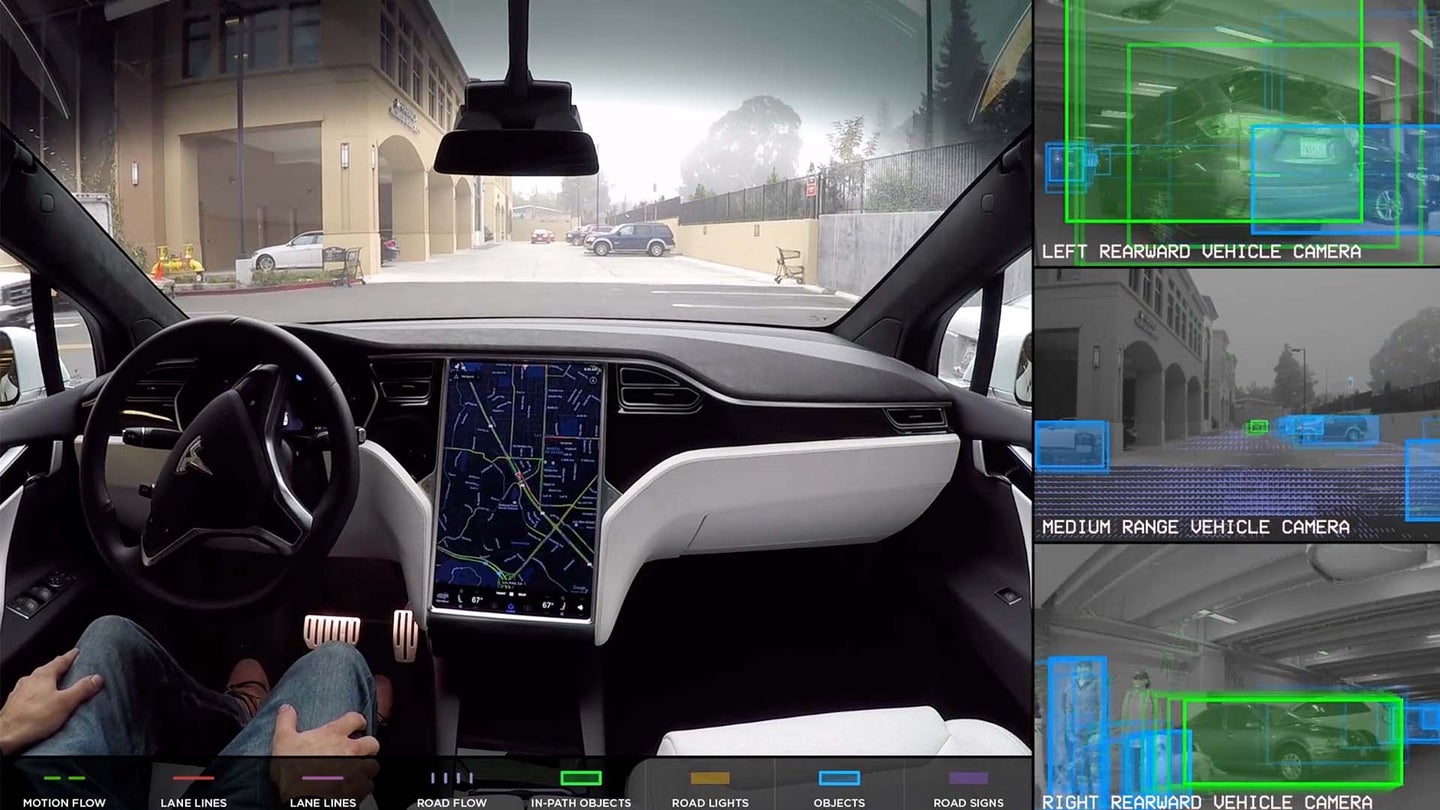 A famed video published by Tesla in 2016 that showed its Autopilot system driving without human interaction was staged according to a group of former employees recently interviewed by the New York Times.

On Monday, the news broke as part of a more thorough investigative story that alleges Tesla may have sacrificed overall safety to fit the vision of Autopilot conceived by CEO Elon Musk. The report takes into account information gathered by 19 former Tesla employees, each of whom spoke under the condition of anonymity. Reportedly, eight were employed as former Autopilot engineers at Tesla.

The video in question, which at the time of writing is still available to watch on Vimeo and Tesla's own website, was made to show off Tesla's newest "Autopilot 2.0" driver assistance system in 2016. It shows a Tesla with a driver behind the wheel, displaying a caption that reads, "The person in the driver's seat is only there for legal reasons. He is not doing anything. The car is driving itself."

According to the New York Times investigation, the video may have been more akin to a potemkin conception than tech readily available in a Tesla purchasable by a consumer at that time.

At the front of the accusation are two former Autopilot engineers who both claim the car in the video was driving a route that had been not only charted ahead of time, but 3D mapped before the drive. This made use of technologies not commercially available to Tesla's customers.

3D mapping roadways for use by semi-autonomous vehicles today is not uncommon. In fact, GM even restricts the operation of its Super Cruise hands-free driving technology to LIDAR-scanned and mapped highways. This is, admittedly, a much more costly and slower roll-out than actively equipping all vehicles with LIDAR, and significantly more expensive than Tesla's approach of equipping a vehicle with cameras and, formerly, radars.

Previously, Musk has called LIDAR "a fool's errand" and a "crutch." Regardless of Musk's viewpoint, 3D-mapped roadways reportedly weren't something available for consumer cars to follow, potentially making the EV in the video significantly less prone to mistakes than any other consumer-purchased Tesla.

Three people who allegedly worked on the video also told NYT that the vehicle being used was involved in a single-car accident during filming. The Model S reportedly hit a roadside barrier on Tesla property, requiring a repair to the vehicle.

The reports from the employees coincide with automated driving disengagement data submitted by Tesla to the California Department of Motor Vehicles in January 2017. While the data alone doesn't prove that a Tesla never autonomously navigated the route, it does plot a high number of disengagements around the time that Tesla released the video. Specifically, it shows that for the entirety of 2016, Tesla only drove a total of 550 miles, 530 of which were in October. Moreover, the data reports that 97 percent of all 182 disengagements occurred between Oct. 14 and 17—the days leading up to the release of the Autopilot 2.0 video. This equates to an average of 2.94 miles between disengagements during the four-day time period before the video's release.

Around the time of the video's release, Tesla claimed that all of its cars included the necessary hardware needed for "full self-driving capability."

However, the automaker didn't start selling its "Full Self-Driving" upgrade until the following year. NYT reports that Tesla first used this term in a technological sense instead of speaking to a product offering that didn't yet exist and that some engineers were surprised to hear. At least two Autopilot engineers told NYT that what Tesla—and ultimately Musk—was promising, was not yet possible.

Additionally, in an email to the California DMV in 2021, a Tesla regulatory counsel attested that the "final release of City Streets will continue to be an SAE Level 2" driver assistance feature.

Two former employees also noted that Sterling Anderson, then-director of Autopilot, warned Tesla's marketing team not to refer to Autopilot as "autonomous" or "self-driving" because it could mislead the public. Anderson left Tesla before the end of the year and co-founded an autonomy-based startup called Aurora. Anderson wasn't the only person to have a problem with the way that Tesla would market its products. Jennifer Homendy, head of the National Traffic Safety Board, called Tesla's use of the term full self-driving "misleading and irresponsible" just earlier this year.

The NYT piece focused on Musk allegedly misleading buyers regarding the ability of Tesla's services and technologies available at the time. But this isn't the first instance in which Tesla has been accused of—or even admitted to—treading a thin line.

Tesla co-founder and former CTO JB Straubel once recalled the original Roadster launch event where employees had to flush the car's battery with ice water in order to remain operational. Musk later called early examples of the Roadster "completely unsafe," according to Fortune.

Right around the time this video came out, Musk told the press that Tesla was targeting a coast-to-coast driverless ride by the end of 2017. That drive, which is now seeming four years overdue, was yet again reiterated by Musk and former Tesla CFO Deepak Ahuja the following year. Musk said that he "missed the mark" and coined the infamous "production hell" term associated with the Model 3—but the drive seemingly didn't happen in 2018 either.

Tesla's claim of all vehicles being equipped with the hardware necessary for full self-driving could also be questioned, as Autopilot hardware has since been refreshed. At Tesla's recent AI Day, Musk said that the hardware is expected to be refreshed again with the eventual release of the Cybertruck. However, as of today, Tesla is offering a complimentary upgrade to vehicles sold with Hardware 2.0.

Whether or not Tesla staged the video, the claims made against Tesla by its former employees may upset some die-hard brand loyalists who have been waiting the better part of a decade for their self-driving cars. It could also prove to be a powderkeg for Tesla's thin-ice reputation with the United States Securities and Exchange Commission.

A similar accusation of staged circumstances made against Nikola, a hydrogen-hopeful EV startup, landed the company's infamous former CEO Trevor Milton in hot water in late 2020. This claim against Nikola alleged that the company released a video of its semi-truck "in motion" in 2018, more than two years prior, which was filmed to make the audience believe the truck was moving under its own power and not rolling down a low-grade hill. Nikola denied the accusations, and Milton was indicted by a federal grand jury on charges of securities fraud, wire fraud, and making false statements.

The Drive could not reach out to Tesla to verify or contest the claims, as the automaker dissolved its communications and public relations department some time ago. The New York Times says that neither Musk nor a top Tesla lawyer responded to requests for comments over several weeks.