"Five miles an hour, if you can run faster than that it'll be fine," Elon Musk said of the robot he claims Tesla will build. 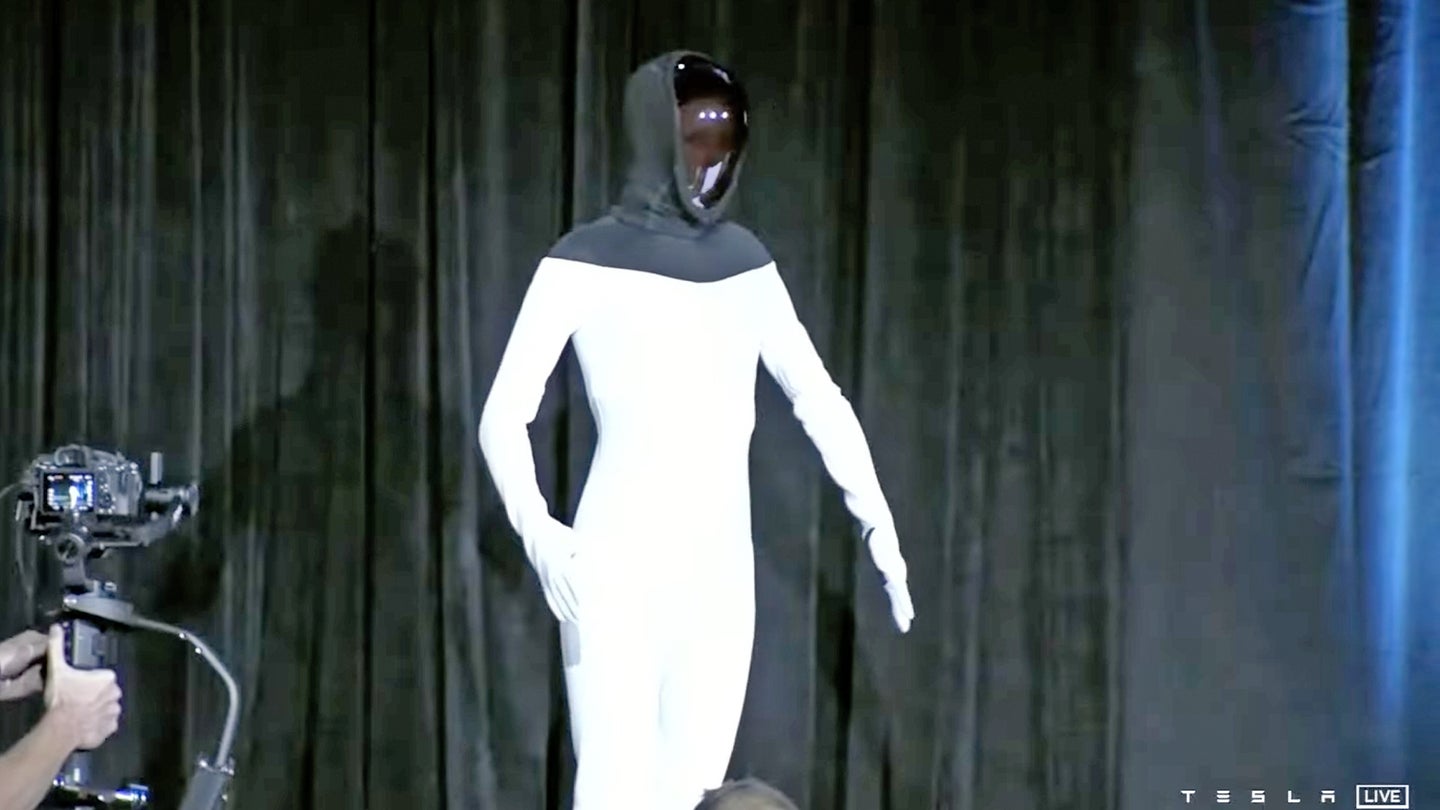 Thursday was Tesla's AI Day event, where the electric automaker had the chance to announce more things like full self-driving that isn't. CEO Elon Musk decided to really spice it up by bringing a person dressed as a robot onto the stage to do a little dance, amid a claim that this so-called "Tesla Bot" could run on the same AI used by its autonomous vehicles, according to CNET. You know, Tesla's an expert in this stuff, having not made autonomous cars for years now.

Standing 5'8" tall and intended to move just like regular people, the idea is that they will be able to take on dangerous or repetitive tasks within manufacturing. And Elon Musk claims Tesla will have a prototype built by 2022. (Other promises, such as the new Roadster and Semi, remain delayed.)

Musk did open his speech by clarifying that the robot costume guy was not a real Tesla product, unlike their new supercomputer for teaching AIs, DoJo, or y'know, anything remotely believable outside of an '80s B-Movie. "Unlike DoJo, obviously that was not real. DoJo is real, the Tesla Bot will be real."

"Tesla is arguably the world's biggest robotics company,*" said Musk, incorrectly. "Because our cars are, like, semi-sentient robots** on wheels. And with the full self-driving computer, essentially the inference engine on the car, which we'll keep evolving obviously, DoJo, the neural nets recognizing the world, understanding how to navigate through the world, it kind of makes sense to put that onto a humanoid form."

Musk added: "We're also quite good at sensors and batteries and actuators so we think we'll probably have a prototype sometime next year that basically looks like this."

Things took a turn for the genuinely sinister, though, when Musk clarified that you will be able to run away from the Teslabot. You know, if you uh, ever need to.

"It's intended to be, uh, be friendly of course and to navigate a world built for humans," Musk said, ominously giggling. "It'll eliminate dangerous, boring and repetitive tasks and we're setting it so that on a mechanical level and a physical level, you can run away from it and most likely overpower it."

He added, "So hopefully that doesn't ever happen but you never know. Hopefully, it'll be a sort of light—five miles an hour, if you can run faster than that, it'll be fine."

The presentation showed the Tesla Bot as having 40 electromechanical actuators. That's 12 more than Boston Dynamics' Atlas, which uses 28 in a hydraulics system. The complexities of trying to get motors to balance versus a hydraulics system aside, it also seems ambitious for a 5'8", battery-powered system to be potentially weighing in at 125 pounds, according to Tesla's presentation. For reference, in a human that'd be the low end of what's considered a healthy BMI at that height and you don't contain batteries.

Musk said that the system would use Tesla's Level 2 autonomous full self-driving system, essentially taking a computer directly from a Tesla car and using the same sensors over its eight cameras.

Whether the Tesla Bot ever becomes a reality remains to be seen and whether it could do literally anything useful is somewhere beyond that. But there you go, a person in a robot suit.

Got a robot costume? Sure, why not send me a picture at hazel@thedrive.com